The temporary water feed to the dining set in the carriage shed had been run on the surface from a tap at The Lodge and this needed to be buried before the winter weather set in.

So the first task was to locate the mains water pipe that was installed some 30 years ago, that feeds from The Lodge to the Steam shed. Luckily Big Davie was present working on another task with Colin Stirling and he recalled seeing a picture of it being laid close to the running track, probably some three feet down.
Nobody knew for sure what other services might be lurking below ground, so hand digging was required.  After about an hour of digging through the surface of the compacted rubble that forms the yard we were lucky, and the pipe was located, in the cess, much closer to the running line than first thought. 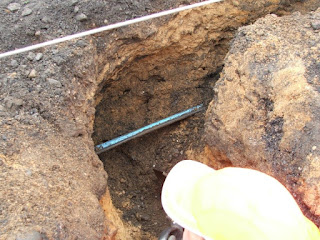 Avoiding the Telecomms cables running the length of the yard, the trench was dug by Stuart and Georgie and the 32mm pipe installed. 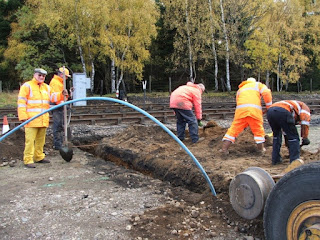 Sunday the job was completed, with the fitting of an external stop cock valve and internal tap, that feeds a hose that runs to the catering set. 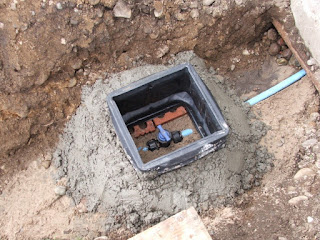 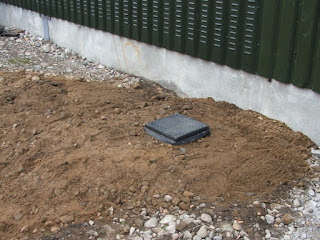 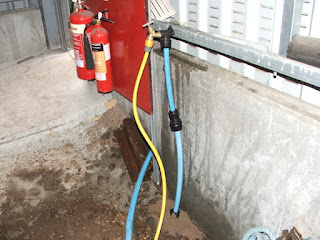 Some of the happy team with the job nearly done. 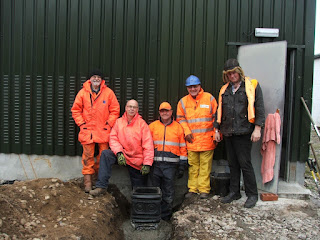 Colin, Nick, Ray, Hayden and Georgie.
Thanks to Colin Frost for info and photos and my Wife for the not so simple cut & paste! 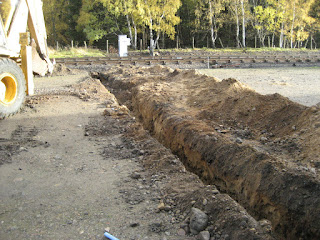 Above trench was dug from the mains water to the Roy Hamilton Shed, after problems in finding old water main and turning water off, a pipe was eventually laid, with further pipework in shed still to be completed at a later date. Also a Telecoms trench dug to the Strathspey Railway Association Spey Lodge (which provides cheap accommodation to Volunteers)
﻿ 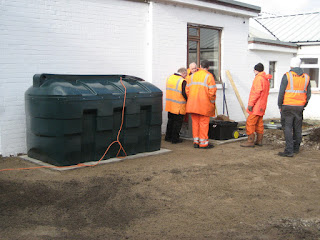 A new back-up oil boiler and tank positioned onto paving slab plinths. This has to be plumbed in and set up prior to the December Train Service, in case the pellet boiler should let us down again when most needed.  Special thanks to Jim for staying on later than he was supposed to the make the water pipe connection & we hope he did not get too big a row when he got home!
Also thanks to Mike Tough for info and he claims to have been too busy for more photos!

A water Treatment Plant has been installed in the Centre platform brick
building at Boat of Garten to provide clean treated water to the water tower
to improve the life of the steam engine boilers. 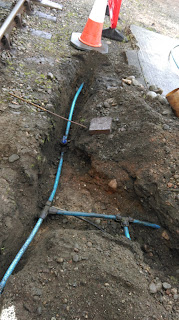 some of the trenching required


The water pipework into the
building for the water treatment plant had been put in by the Permanent Way
Staff. 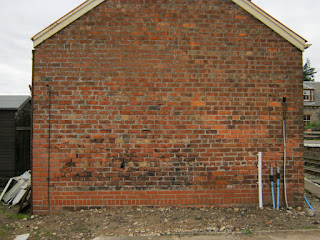 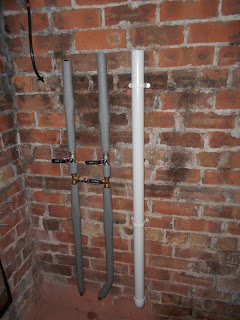 and in
With the technical plumbing bits neatly done by Jim Clark (apologies no photo of the man in action!)
Also a drain pit had been dug for the water
from the treatment plant when it back-flushed.  . 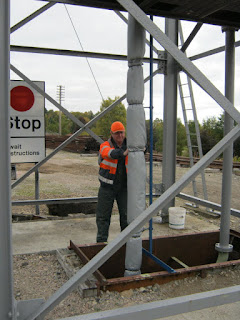 At the same time as this was being carried out Colin Frost and Ray Kenyon (above)
completed the fitting of insulation muffs on the exposed outlet water pipe
from the water tower. Last autumn trace heating tape had been fitted to the
outlet pipe and insulation muffs fitted but there were insufficient muffs to
complete the job. Colin Frost kindly offered to purchase the remaining
insulation required and fit it, in order that the trace heating would work
more efficiently this winter. 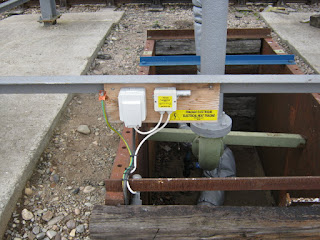 An electrical supply was
also required for the controls and chemical pump and the SR electrical
department attended to assist with connecting this up. 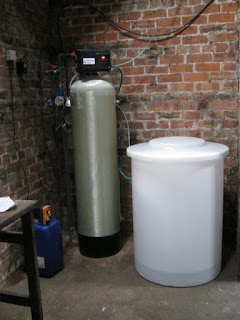 Above after the installation engineer attended on 14th Oct to
connect up and commission it. (hiding Jim's pipework!)

All that the plant now needs is enclosed with a frost proof box & suitably able helpers needed soon to do this.

Before the Winter weather comes, the opportunity was taken to finally deck the Dulnain Rail Bridge properly, using the kindly donated Douglas Fir timber from the BSW sawmill at Boat of Garten, that was used as a temporary safety deck, away back in February 2014. 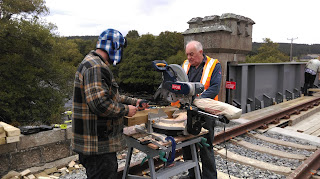 John Wood lent us his mitre saw and it was invaluable in squaring the previous temporary boards and cutting them to exact length, before screwing down onto the bespoke cut & notched bearers. The power came from the large generator in the Brake Guard Van (BG) fortunately the weather was at least dry. 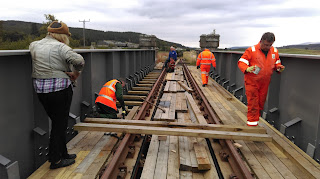 Usual Worker to Watcher ratio! Neil Howie trying to make up for it, by taking a paint brush for a walk whilst simultaneously load testing the Up Walkway. 2/3rds of the cess walkway completed on the Saturday. 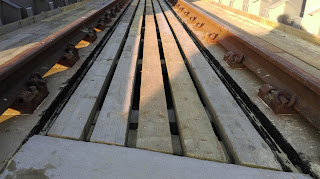 Depleted squad on the Sunday, greeted by a cool 1 degree C but fine dry and sunny later, all worked very hard to almost complete the job (few hundred screws still to screw down) 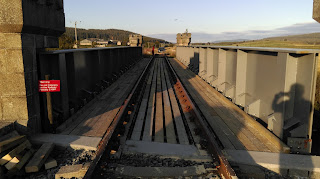 Some statistics - 140 boards - 4.2m x 75mm x 150mm of treated timber and in excess of 600 fixings, so far.
Some of you may get a closer look on the 7th November when the DMU is hopefully running on to the bridge as part of the Strathspey Railway Association AGM day. 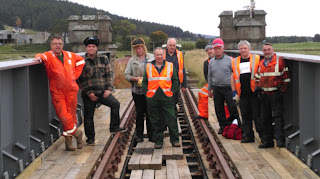 The Saturday gang.
Thanks again to John Wood for photos and info.
﻿