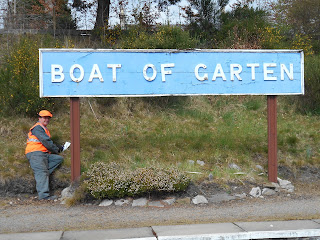 Ray Keynon measuring up the rather dilapidated running-in board on the Down platform, 14th of May. 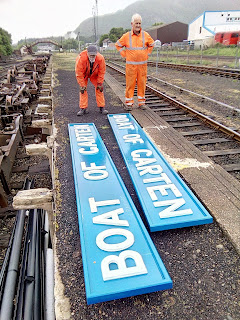 Fast forward to June 30th and the Up and Down boards are ready to be loaded from old Speyside platform at Aviemore onto Fish & Chip Special Diesel Multiple Unit, to conveniently convey them to their final destination. I believe Colin Frost above left paid for the new boards, many thanks, what I don't believe is that William Dodds from the Carriage Shed did the restoration, as they look too Good!!! (subsequently found out that a whole team from the C&W Department were involved, apologies to ALL, hopefully Keith's Blog will give due credit) 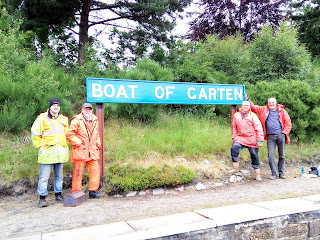 The following day Nick Coutier, Colin Frost, Dan Courtier, Jim Hardy & Ray Keynon (who took the above photos) erected the boards as well as cutting the grass by the picnic tables.
Many thanks to the Ellon Team for their hard work over the weekend which also included finishing off the Train Watering plumbing works at Aviemore Station.
More recent works done by the PWay Squad included - grass strimming at Boat of Garten and Broomhill thanks to Ian Stanworth, manning the footcrossing at Boat of Garten during the Family Gala Weekend - Thanks to Roger & Andy and of course a continuation of Fishplate oiling, now on the Boat of Garten to Broomhill section. Thanks to Ben Tyrell, Ian Stanworth & Mike Tough for completing 3/4 of a mile in very wet weather. 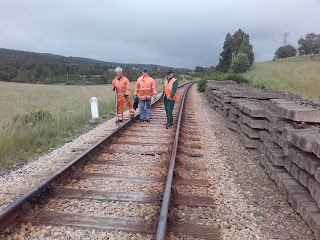 Which looks as if cleared up by close of play.