Another excellent PWay squad turnout to a frosty but sunny Boat of Garten - task
spot re-ferruling between the Signal Boxes.
Georgie marked out the ones requiring replacement, 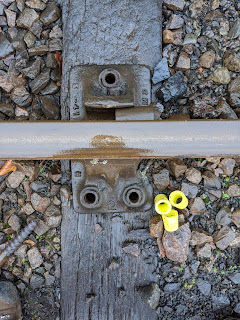 then remove the chair screws, above the old wooden ferrules still in situ, with the replacements already poised. 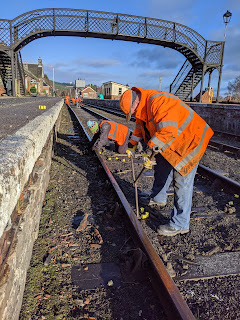 ﻿
Next Angus has the unenviable task of extracting them - some are easier than others!
Followed by Andrew attacking the most obstinate ones, with Georgie on platform cracking the whip on team two! 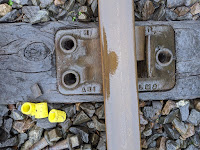 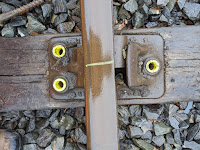 Looks like they broke the rail!!!! - the new ferrules are gently hammered in. 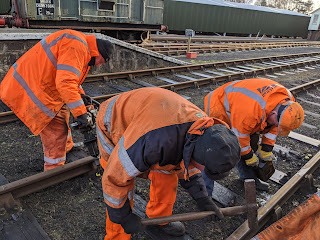 Then any worn screws replaced with better ones, dipped in creosote by Angus, tapped in by Martin and screwed down by Jim. Three bags of ferrules were consumed during the day and squad still had time to lay out most of the timbers for new switch into Boat of Garten North Yard as mentioned in previous PWay Blog of 11th Dec 2019, John said he was too busy to take a photo! (I will try in a few days) but thanks for all the photos and info.
﻿
Many thanks to volunteers - John, Angus, Martin, Jim, Roger, Andrew, Ian & Fergus for braving the snow flurries and achieving a lot through teamwork.﻿
Posted by Neil at 11:07