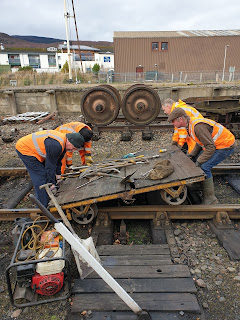 unfortunately third set of trailing hand points were set against us and no one noticed until CRUNCH! Wee minor derailment - swiftly rectified as above. 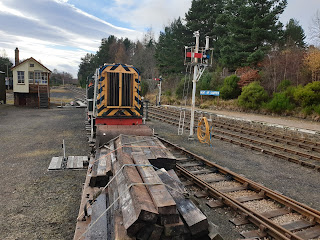 Once we got to the worksite it was discovered that Georgie had to abandon the previous days P'Way train, with a broken spring on the North British Locomotive, conveying our required sleepers. Yet again Steve and the trusty 08 locomotive came to the rescue, above from the brakevan showing the train eventually leaving for the five mile sprint! 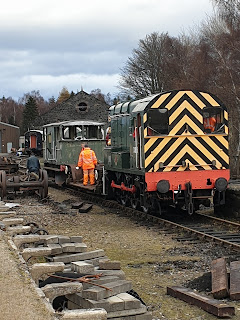 The sleepers were quickly thrown off on arrival at Aviemore and spot re-sleepering was able to continue. Meanwhile some of the squad were able to pack, backfill and tidy the previously changed sleepers, I had intended an after photo but light faded too quickly. 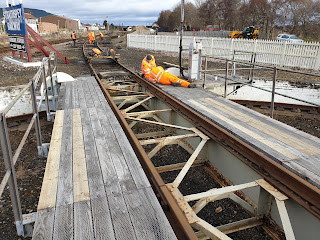 Also Ian and John (not often you see him lying down on the job!) stretched & fixed chicken wire over the decking of the turntable, hopefully to reduce slipperiness 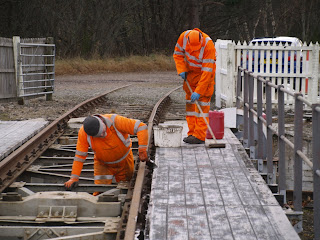 and finishing off with a job that John loves - painting! - on an oil based wood preserver.

Many thanks to Andrew, Angus, Kevin, Mike, Fergus, Ian, John and Georgie & Steve.