An experimental 0900 start as currently brighter in the mornings, even Graeme managed to rise at the crack of dawn, alas Georgie (the boss) pitched up at the usual 0930 by which time it was pouring with rain, Angus aka "Stoker McPhail" had by this time got a good fire going in the van. We eventually braved the elements, once the stabled vehicles had been shunted out of the way, 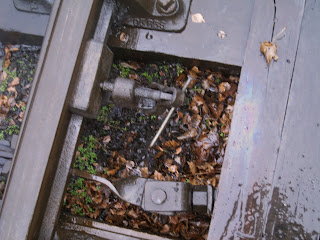 Jim and me clamped the points out of use for number one "road" at Aviemore Engine Shed, as it was being disconnected, to allow work to commence on laying new track towards the anticipated new "Steam Running Shed" 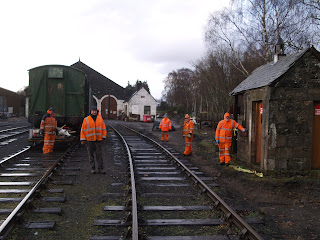 ultimately adjacent and towards the rear of the existing. Above left to right - Martin, Graeme, Ian, Angus & John pose for the "before" photo. Yet again the squad was big enough to be split in two - 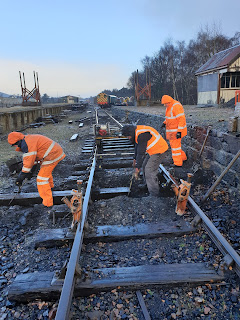 allowing re-sleepering to continue, mid-week Georgie and Fergus had re-ferruled a good number of the chairs, so we thought plain sailing but we could not get our portable generator started, rather dejected we we returned to shelter in the Mess van to discover, the fire had also died! 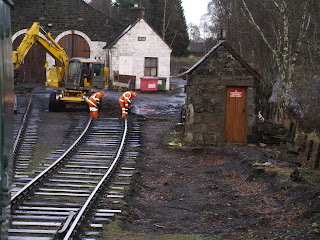 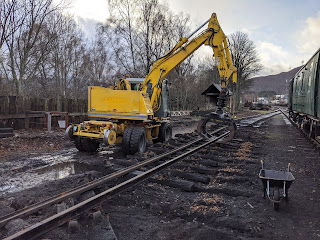 made rapid visible progress, fortunately the weather improved and John easily fixed our generator, Mike joined us after a virtual Strathspey Railway Board meeting and a few sleepers were changed. 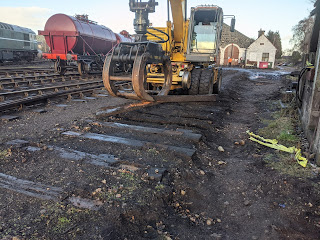 Stats - 8 pairs of severely corroded/buried fishplates removed, un-keyed & un-screwed 180 chairs and removed by hand, sleepers as above. John and Angus will I suspect have a few aches and pains today! 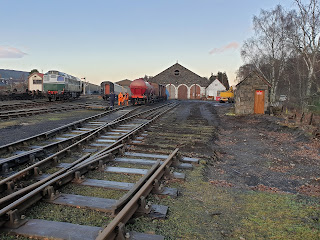 Above scene as the light faded.

Thanks to all mentioned and John for his photos and stats.