Even though a number of the Gang called off through various injuries, a good sized squad turned out on a cool drizzly/damp December day, to continue re-sleepering in Aviemore Yard.

Georgie also bought us an early Christmas present in the form of six brand new "Bulldog British Heritage" shovels - only to increase productivity! 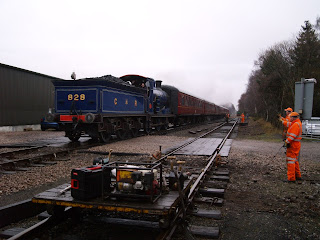 by the time the first train returned our worksite had moved on slightly, almost onto Spey Lodge Level Crossing, although just coasting past slowly (not worthy of a video). 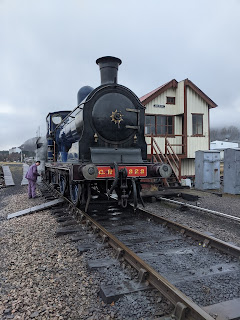 Driver Martin doing some oiling, photo from John who was on light duties, with Fergus our Fencer seconded to dismantling the fence where Georgie was working with the JCB (bottom photo) 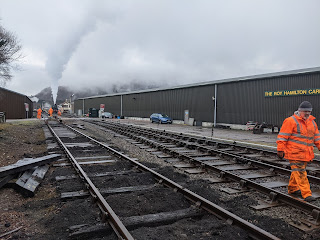 then after lunch digging out the light ash ballast ahead of the main squad, which managed maybe double figures in the number changed - one had to be changed twice! (In true Strathspey fashion) as it was found the screws wouldn't grip as it was rotten inside. 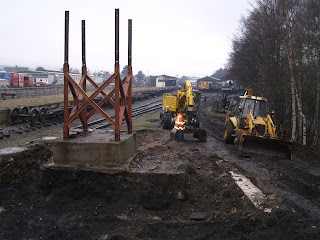 The up concrete base of the old Speyside Station footbridge is considerably more extensive than we would like, talk of having to hire a "pecker" to be attached to the Colmar behind Mike, to attack it, to reduce the weight (lets hope the other one is not as big below ground)
Many thanks to Fergus, John, Ian, Angus, Andrew, Roger and Mike who assisted after doing the Boat of Garten - Aviemore weekly footpatrol. A get well soon goes to Graeme, Kevin, John Hornby and Jim who is recuperating after a planned operation, we now have plenty shovels waiting for you!