Last Saturday in November - Ian Stanworth reports and thanks the hard work from the squad of Kevin, Angus, Jim, Martin & Roger managing to change 16 sleepers until 3pm when it got very chilly and the light faded. Georgie had yet again to fill in the pot holes in Aviemore Station Car Park and then spent more quality time with the JCB preparing the trackbed for the new track to the Running Shed site, as seen below 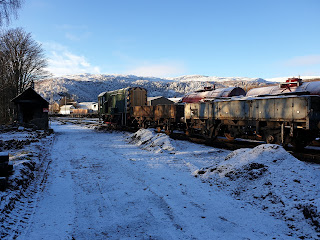 on Thursday, re-sleepering was not possible due to a penetrating frost but Georgie had the small squad swapping worn check rails on the curve over with good ones on the straight, like everything on railway easier said than done! 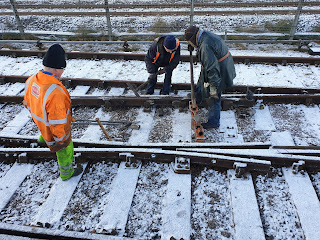 Here the check rail needed the gentle persuasion of back to back jacks to sit in the chairs properly, so the new wooden keys could be hammered tight, making the check rail rigid and hopefully prevent any more wear on the nosings. Thanks to Mike, Andrew & Georgie for braving the frost that never lifted all day. 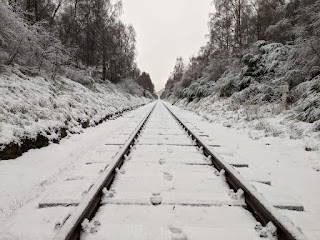 Yesterday saw further snow as seen from John Wood's track inspection, photo looking towards Aviemore on the "Dalfaber straight". Roger, Angus and Georgie did more dismantling of redundant track behind old Speyside Station. Ian cleared snow off platform at Boat of Garten and Mike attended to Broomhill platform and cleared run round switches.
Further on in John's inspection at the Kinchurdy strap rails, hopefully a short clip of the first of the Winter Steam Services makes a rather smoky appearance.
Thanks to all that braved the elements/contributed to this blog - Teamwork as usual!
Posted by Neil at 13:49