At Aviemore the existing unsightly water pipes and fittings are to be removed from the fence as many are perished by sunlight and are faulty. To achieve this a long 220 metre trench had to be dug to a depth of approximately 300 millimeters - not doable by hand! - this is where Neil Howie came to the rescue, with his own Wee Digger - just perfect for the confined space available. 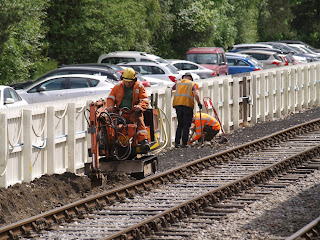 Above Neil expertly digs away, while Mike and Bruce investigate possible S&T ducting obstacles and hand dig as necessary. 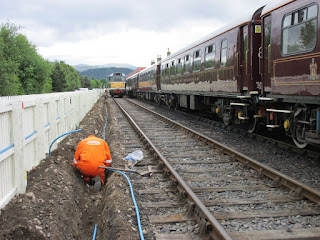 Jim Clark praying or maybe plumbing! with Royal Scotsman as backdrop, our Class 31 had hauled it from Boat of Garten with it being a 10 coach train. 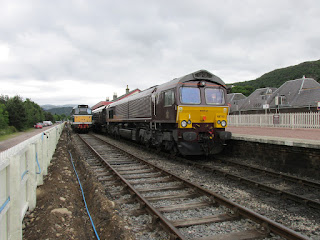 The Class 66 sat at the Shed and then propelled it out and then headed North later in the morning ... note newly laid water pipes in trench awaiting standpipe connections and backfilling. 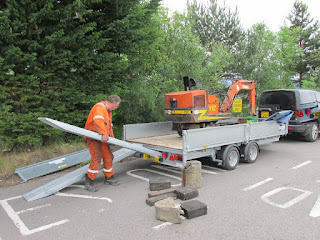 Without Neil Howie and his digger this job would not have been done so quickly and so cheaply ..above Neil heading home to Lochcarron with BIG thanks from Strathspey Railway Company for his help.
This work will ease frost problems in winter in that system can be drained down and it will remove the pipes from the risks associated with being outside.

10 new standpipes are fitted, plus 3 for coach washing with hozelock couplings and the materials needed were funded by Strathspey Railway Association who are also funding water pipe improvements in Boat of Garten Station where vulnerable loft pipes are being put inside.
Thanks to Mike for info and photos. ﻿
Posted by Neil at 14:23