On Sunday, In true Strathspey style it was discovered that the Road Rail Vehicle (RRV) on/off pad built the day before was 3/4 of an inch too high above the railhead ! 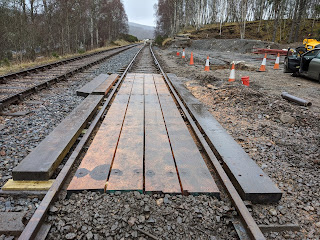 so in miserable weather, it was re-packed, notched, drilled and screwed﻿ for a second time by Ian, John with Georgie closely supervising and leading. 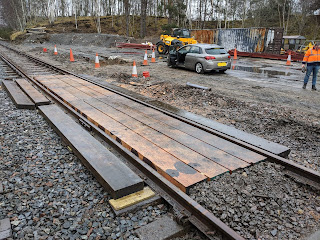 Job done (hopefully!) unfortunately John's car broke enroute home meaning a late Sunday supper. Thanks to John photos/info.
In the background can be spotted the arrival of the steel for the replacement Shed that was accidentally destroyed by fire last Summer. 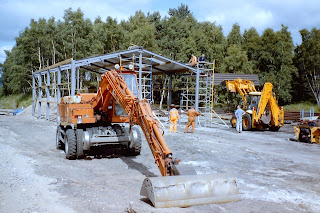 Originally solely paid for by the late John Morley (same colour boiler suit as RRV) above, I am in orange atop a rather wobbly scaffolding - different era as far as health and safety! 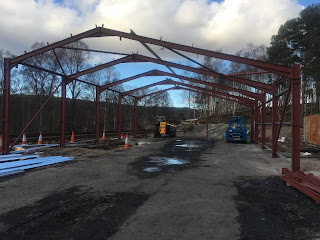 By yesterday the local firm Nethy Steel Ltd had quickly erected Morley's Mark 2!
Thanks to Mike who took both photos all be it 16 years apart.
Posted by Neil at 13:32