The squad's worksite was at a slightly different location, as the brand new pair of switches, had been delivered to Boat of Garten Yard, where the Switches and Crossings (S&C) will be carefully assembled, before being partially dismantled and craned to its final position 300yds further North. 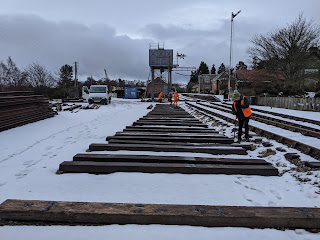 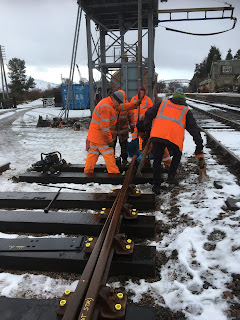 before Down side of switch placed onto the timbers, in miserable sleety/rain, lined up perfectly on each timber and one screw inserted, to hold in position. 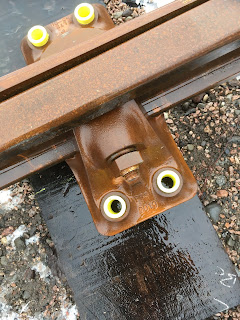 Of note is the year of casting and LTE stands for London Transport Executive? Certainly Georgie said that only the London Underground has new bullhead switches built in UK.

Mike and Gavin were sent to measure the "offsets" of the existing Mainline profile, as it is on a slight curve, which we need to replicate exactly for obvious reasons!

Then positioning the "Crossing" (Ian's foot leaning on it) in correct place. 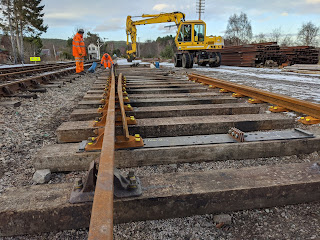 Usual high-tech bit of string (Hallade wire apparently) in use and it was very fortuitous that Gavin at far end of rail above, chose this weekend to Volunteer as by profession he is a S&C Design Engineer (although I guess he has never worked with bullhead rail before?) he did say he "gained fantastic knowledge and on the job skills" after the hard long day. 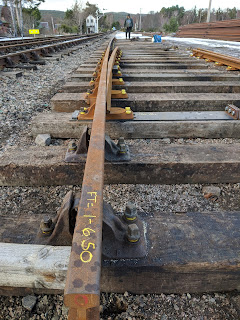 Georgie casts her eye over new B8? switch and the noticeably curved profile.
Many thanks to Roger, Ian, Andrew, Georgie and John, Mike, Gavin who all supplied the photos.
﻿
﻿
Posted by Neil at 15:41