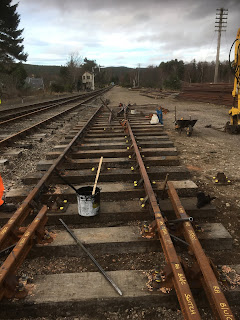 After another pesky meeting interfering with PWay Weekend (all be it, the Strathspey Railway pre-season get together, well attended with around 80 there) work commenced after lunch, with Ian, Martin & Mike plus Andrew started fixing down the high rail which had been set earlier by Georgie ..Roger joined us as did Georgie a little later, she had got detained after the meeting. 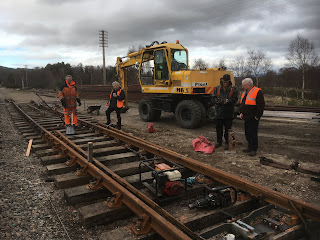 Then the low rail switch & the crossing were set & fixed down as was the cut to length plain rail ..it all could be lifted in now Georgie says
Signalling & Telegraph department (S&T) arrived to assess the point locking gear needed & stretcher bars all to fitted before the turnout is positioned ..so good progress, above photo
Finance Director checking the newly purchased switches for value for money & maybe thinking about returning to PWay work...…
Thanks to Mike for all info & photos.
-----------------------------------
And Sunday's squad of Georgie, Iain, Fergus and Andrew who provided info and photos 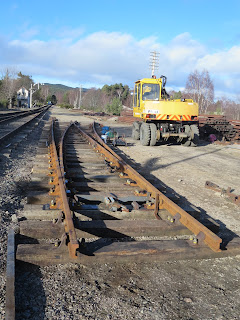 a lunchtime shot from Sunday with the curved closure and stock rails in place but still to be aligned, gauged and pinned down - which we managed in the afternoon bar a couple of special chairs and dumpies which Georgie has still to source. 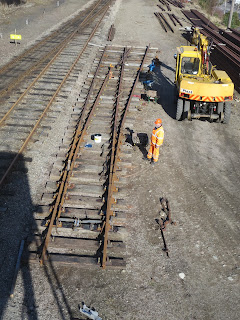