First task on Saturday was the clearing of snow and ice from the Down platform at Boat of Garten, finally proclaimed safe once the first packed Santa train of the day had arrived.
Thereafter the small squad proceeded to the River Dulnain. Now that the rails are on the Bridge the approaching track was ramped up to Bridge Rail Level, by packing of the ballast under the sleepers and finally all tidied up. I believe there were some aching under used muscles located subsequently - you deserve a guilt free extra mince pie over the festive period! 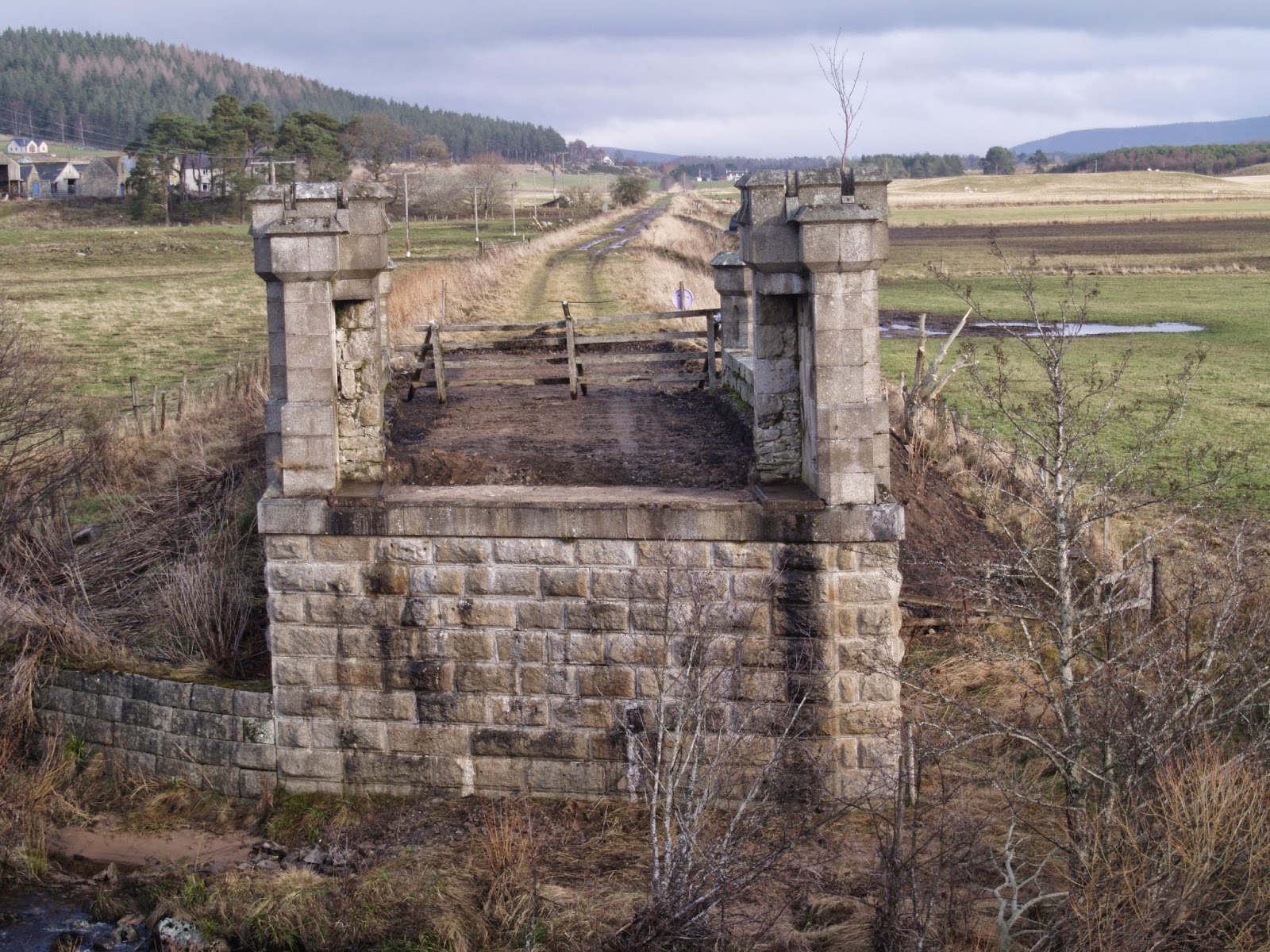 An old view taken just under a year ago, showing the route to Grantown.
A fresh squad on the very wet Sunday- cut out, lifted and turned the temporary wooden decking boards, so that they are now on top of the cross members running parallel to the running rails.
Apologies for lack of photos during work - inclement weather and short daylight hours, will try and add some later of what the small but very hard working squads achieved. Mike sent in this unattributed, even more historic photo, looking towards Grantown sometime prior to the lifting of the track by the looks of it.

I thank you all for your support (armchair included) and wish you all a Merry Christmas and hope to update you on PWay activities in 2015.﻿ 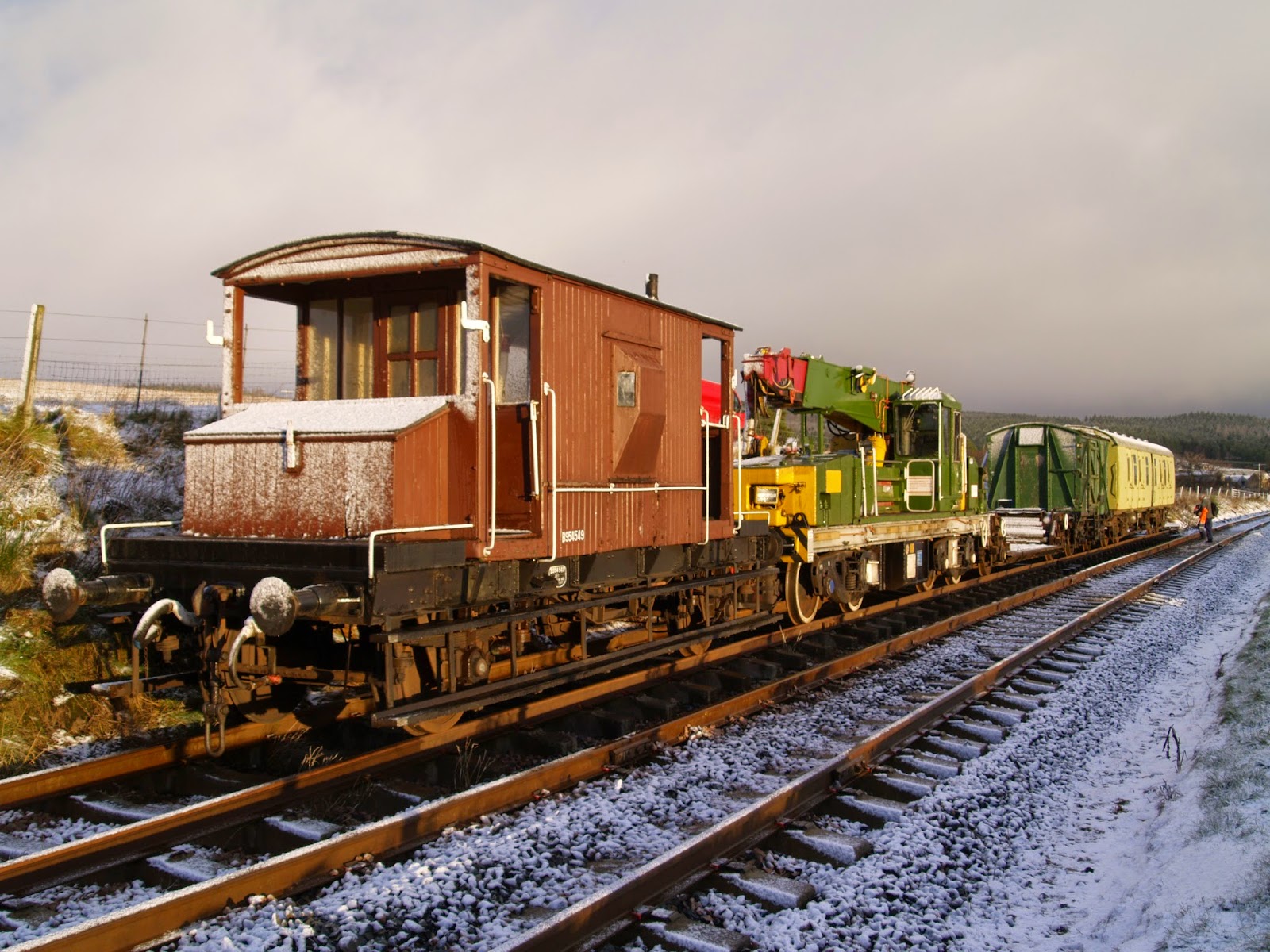 A wintery scene greeted us today. 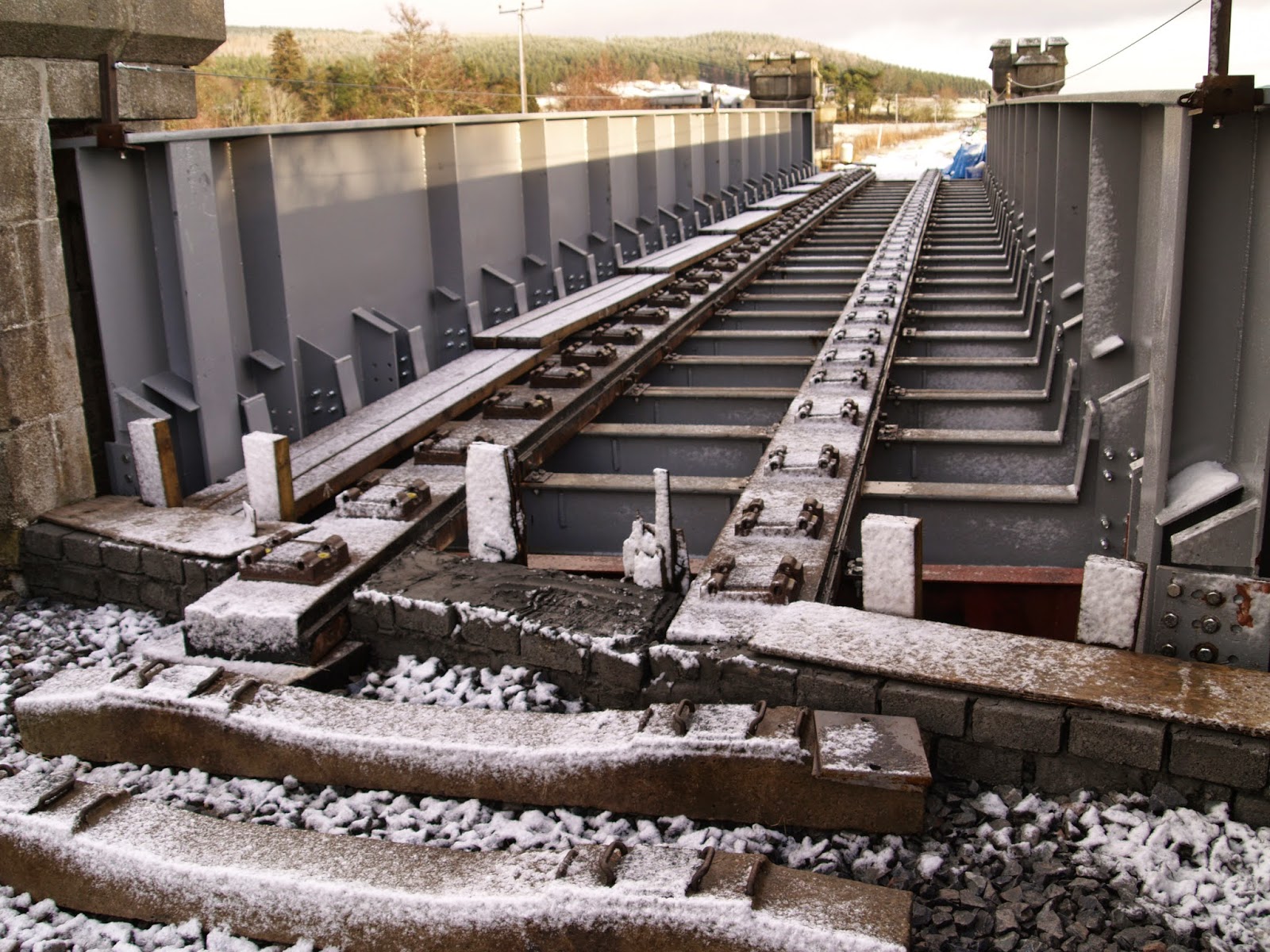 On Friday the ballast retaining wall was built by Victor, our friendly Builder assisted by John Wood.  On the Saturday the squad backfilled the ballast against it and the last two concrete sleepers were dropped in, the Base plates with yellow plastic ferrules and rubber pads were positioned on the bridge. 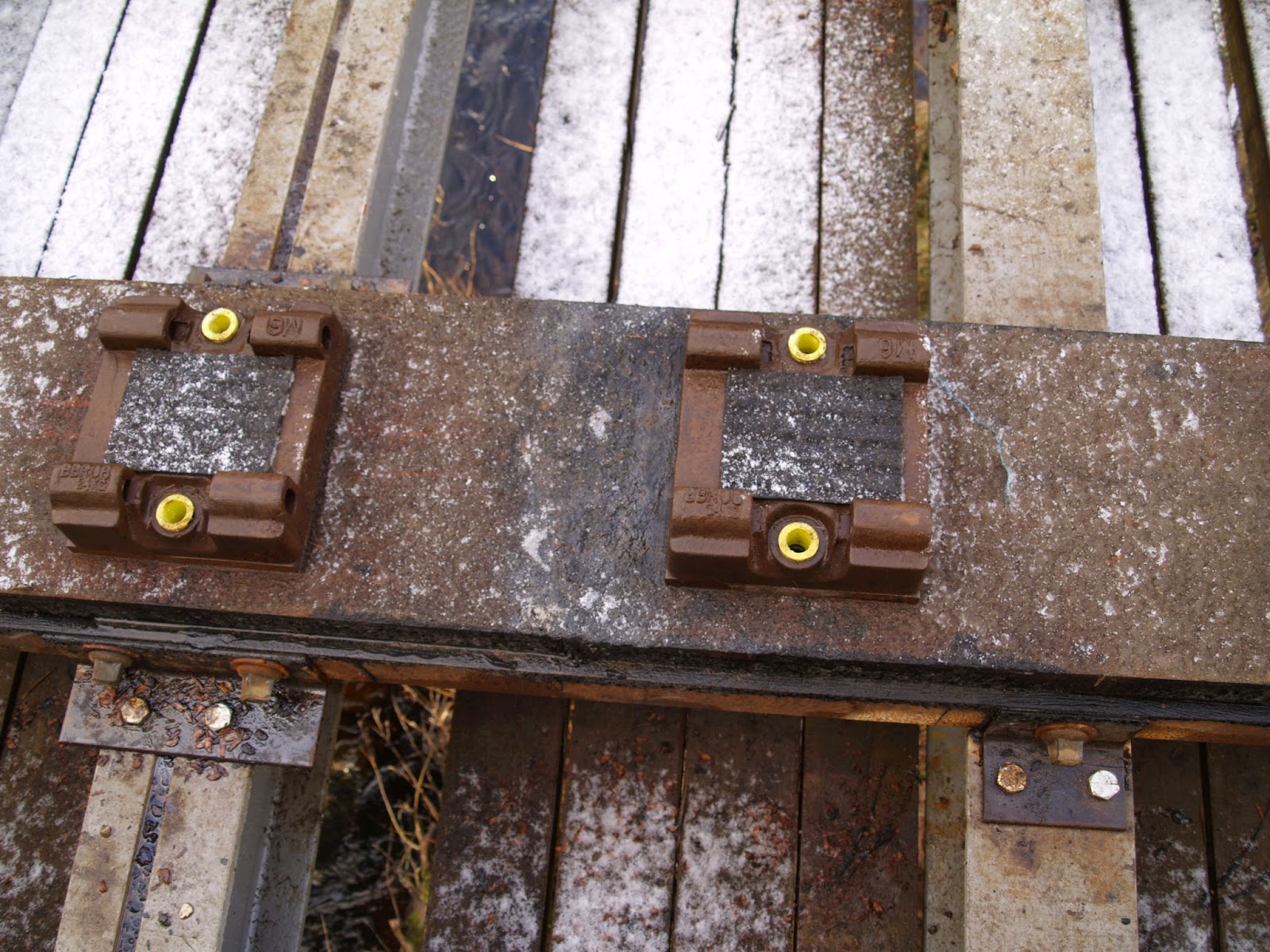 I think I am right in saying that the rails have a 20mm Cant, spacer plates just visible below base plates,

photos above and below. 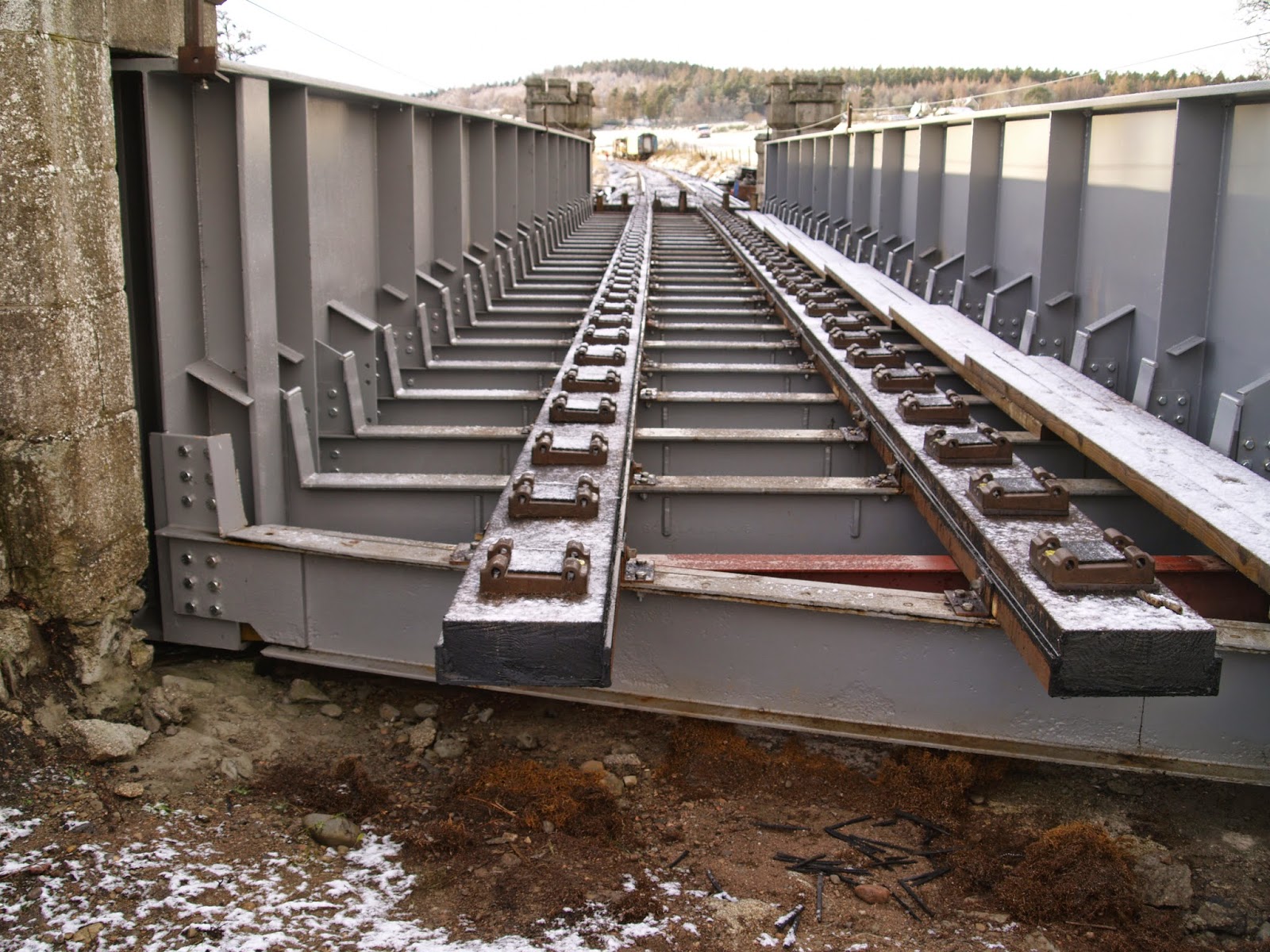 Above looking towards Broomhill no doubt another ballast retaining wall required here in due course. 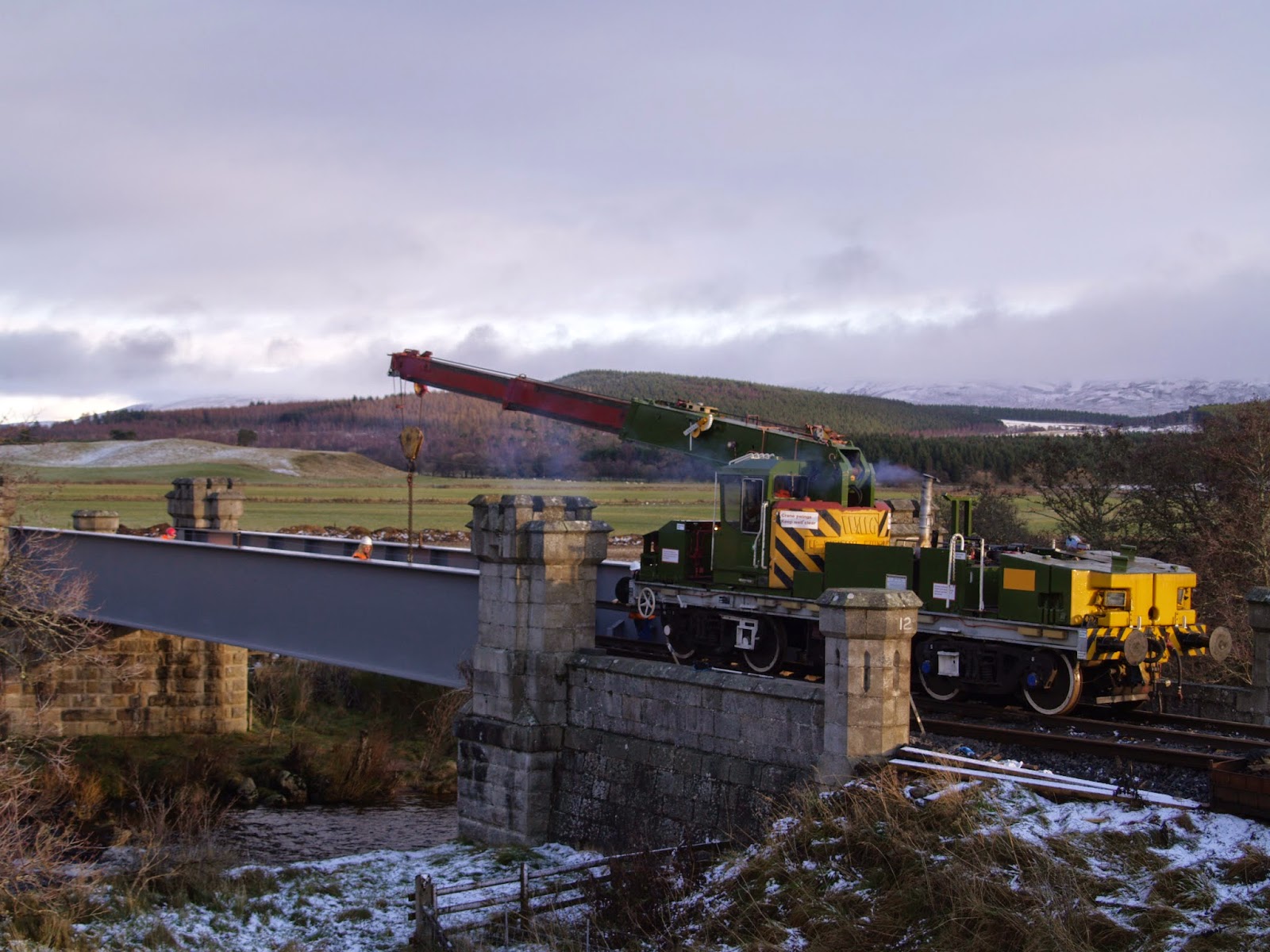 Today our own self propelled rail crane picked up the previously positioned 60 foot rails and gingerly propelled them into position.
﻿
﻿ 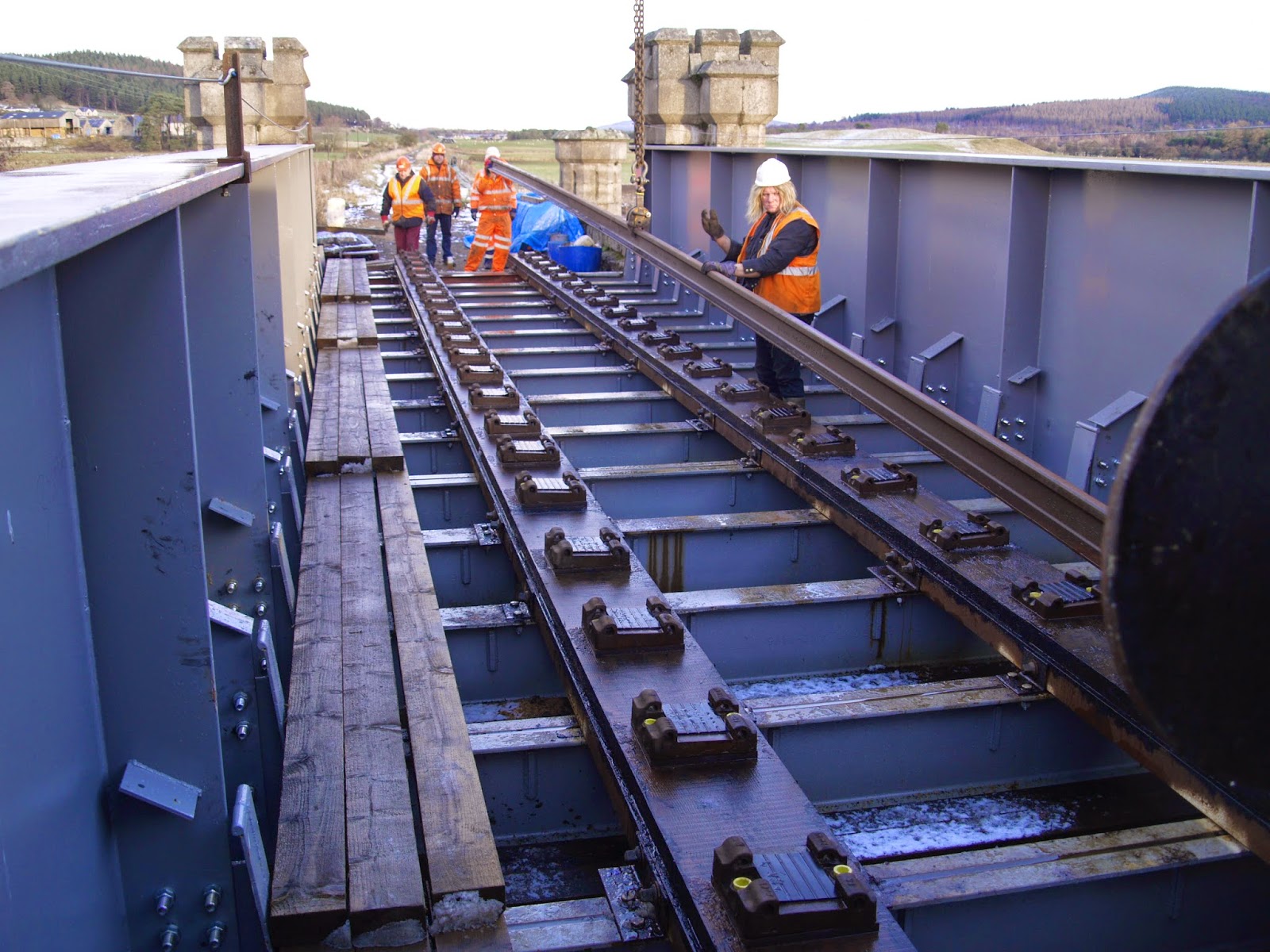 Above the second pair of rails dropped into position. 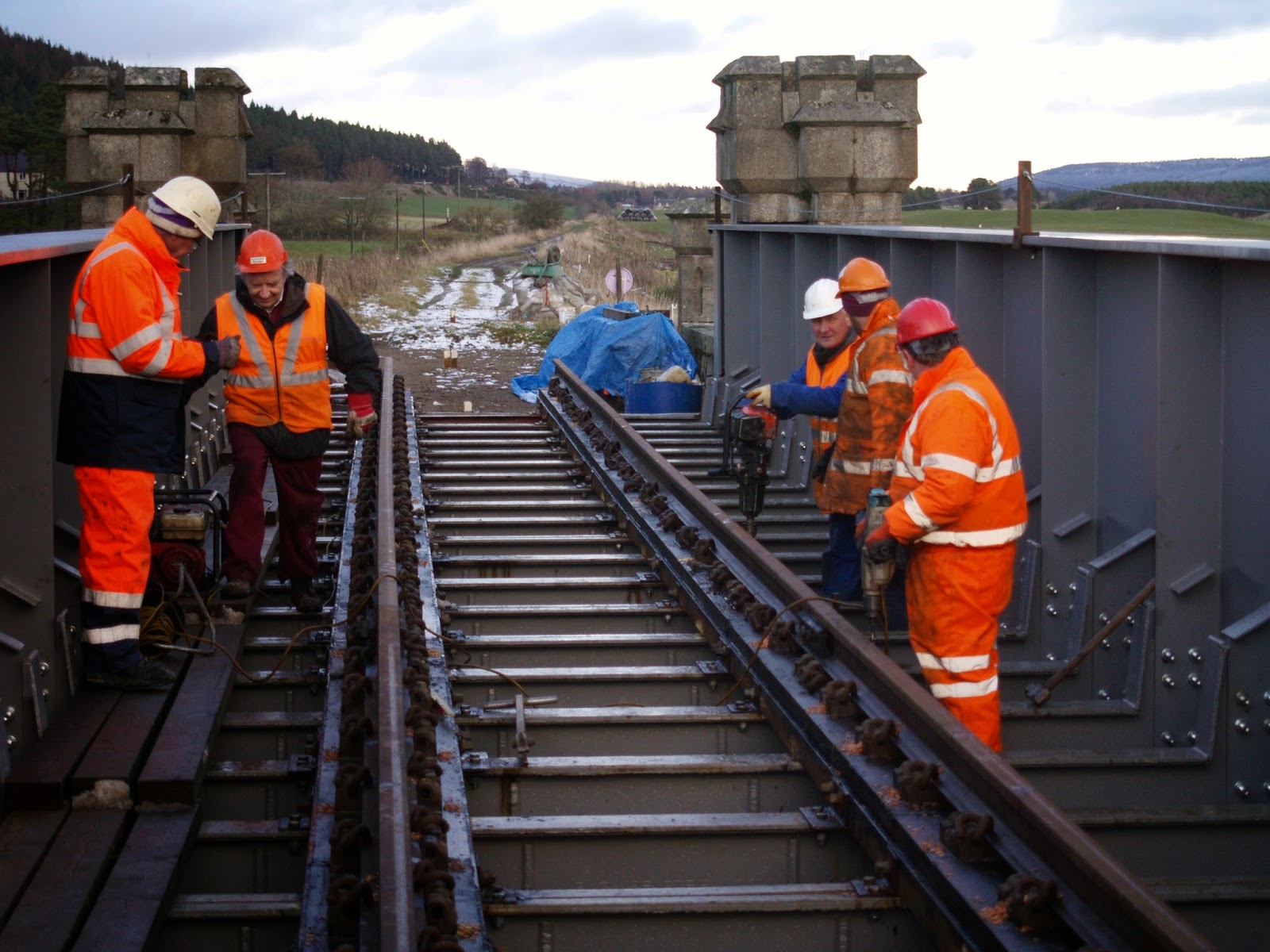 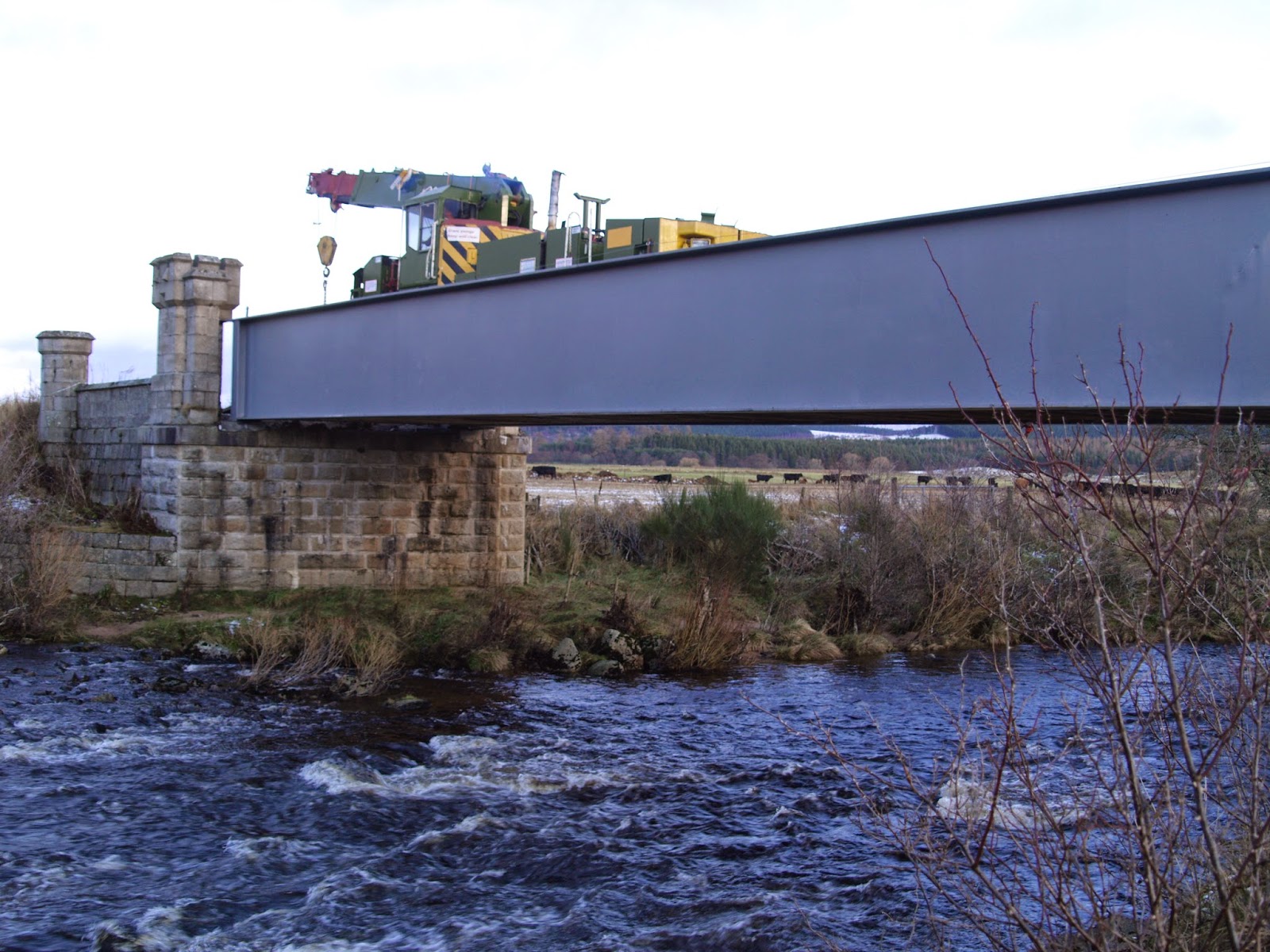 You may well ask why the Crane had to go so far over the Bridge? 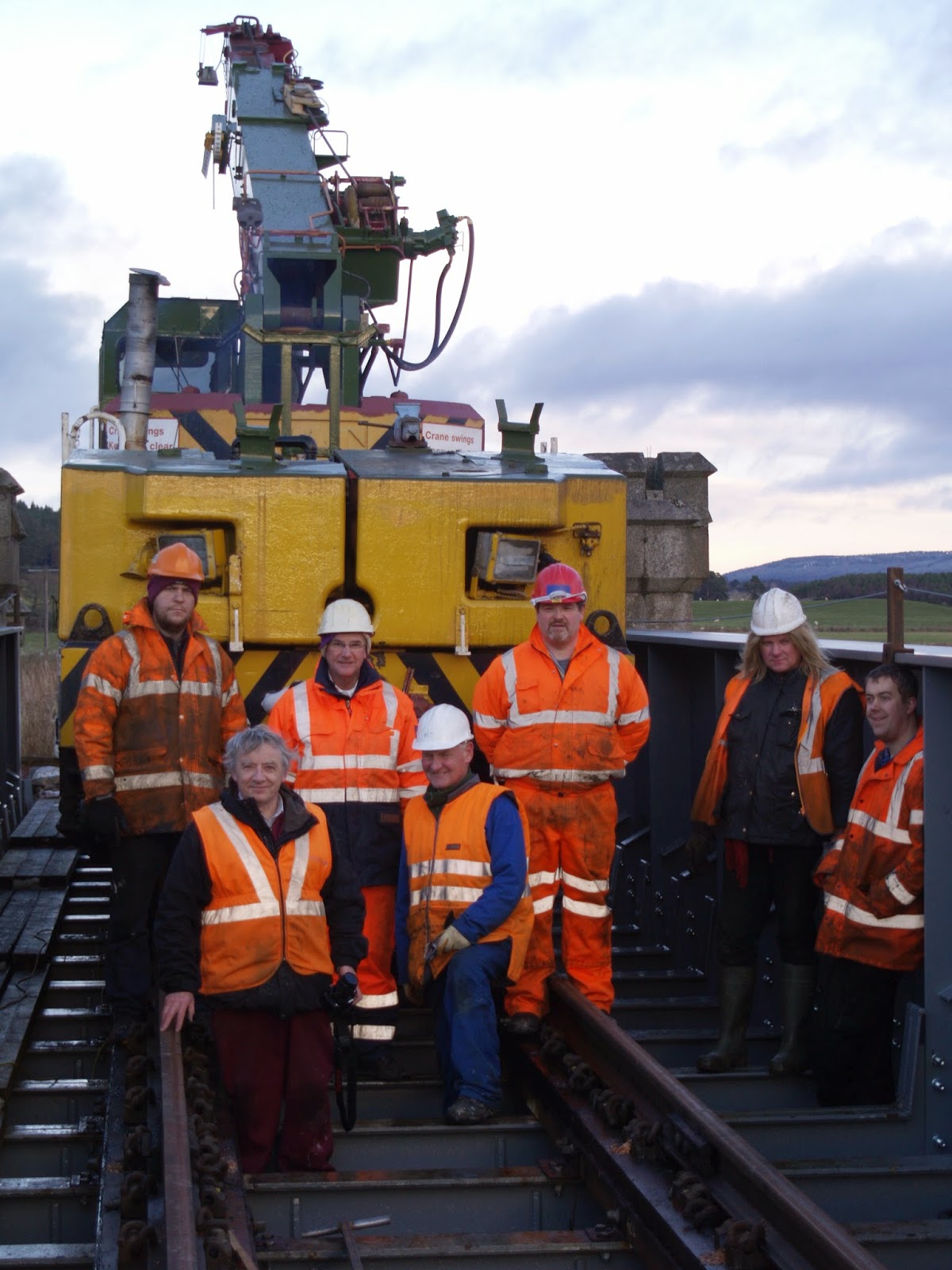 A  rare Celebratory posed photo, pretty much concluded the Cool days proceedings!
Posted by Neil at 18:34 No comments: