Monday saw the commencement of the steel erecting of the storage shed at Boat of Garten.
Station Master Robert Walters took the below photo. 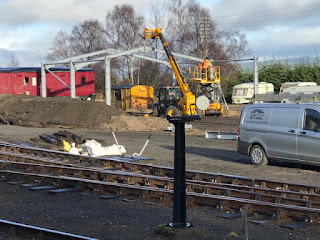 Georgie was soon on scene, checking with her trusty Bridge Gauge the clearance from running rail to roof and sides, just in case.... 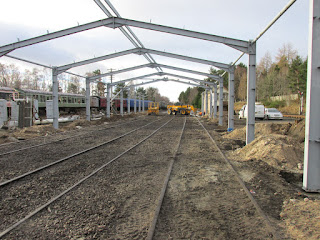 needless to say,(much to Mike's relief) all passed clear! Above shows good progress to Wednesday afternoon 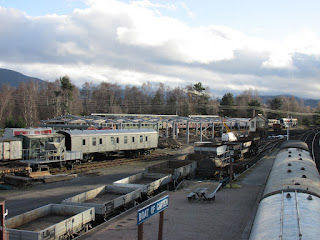 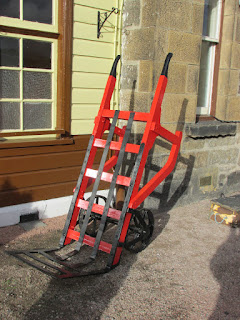 and adding a bit of colour to Boat of Garten Station this recently refurbished sack barrow has been returned from the much appreciated attention of the Ellon Men's Shed.
Thanks to Robert and Mike Tough for photos and info.
﻿
﻿
Posted by Neil at 08:27 No comments:

A decent sized squad was called for, as we were hiring in a wood chipper and two operators and the response was amazing. In total I think there were a dozen volunteers, too many to name them all, but a special welcome back to Jim Clark, who has got over his eye problems of recent and the Ellon Squad members that made it all the way from Ellon! 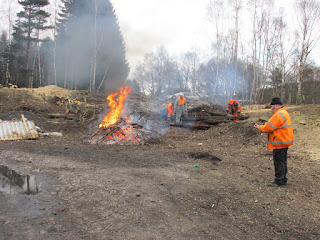 Once the Fire Service had been advised a good going fire was used (maybe this is Iain phoning them!) to get rid of the stuff that was unable to be chipped.
Trees were also felled by the Headshunt and logs given to a neighbour over the fence, in exchange for 7 cups of tea! 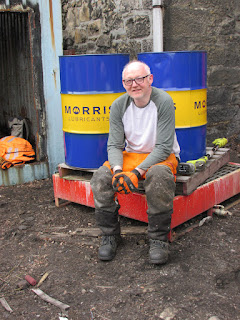 Amazingly the site was cleared by 2.30pm thanks to the tireless efforts of John Wood and the tremendous team work of the extended PWay Squad. Well done to all.
If you fancy doing similar site clearance work on the Grantown Extension then contact Andrew McCracken - as he is trying to organise dates in March.
Once again thanks to Mike Tough for info/photos.
﻿
Posted by Neil at 21:17 No comments:

Mike Tough as project Manager was again up at Boat of Garten today. 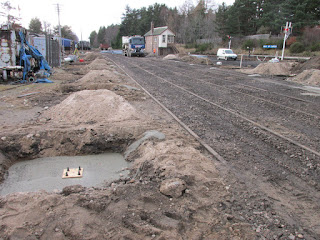 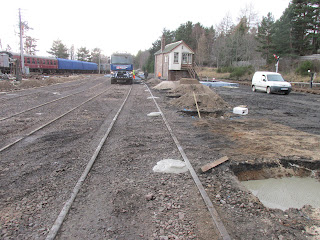 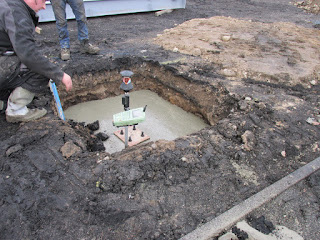 Setting holding down bolts into the wet concrete (the high tech way - not a bit of string in sight!) All twenty four bases were cast, using in total 30 cubic metres of concrete supplied by David Ritchies & Sons Ltd of Aviemore.
Thanks to Mike for photos/info.

Beside the original Engine Shed at Aviemore a two track "Running Shed" is proposed and site clearance started yesterday. 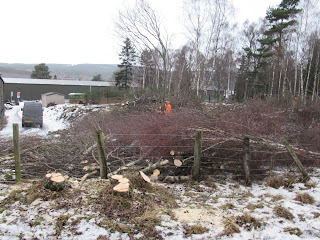 Mike Tough did a spell helping Willie Dodds in the Carriage & Wagon Shed until our contractor friends Scottish Woodlands Ltd arrived, they did a quick recce, wrote a risk assessment, put up some warning signage and in no time by the two expert chainsaw men had created a huge pile of felled wood at the site of the proposed running shed. 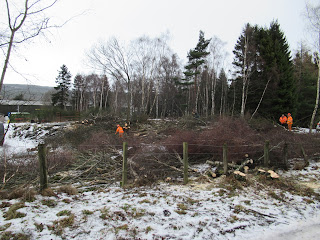 Andrew McCracken helped guard the footpath for pedestrians during the felling near the fence and his reward was a boot full of timber for his fire. 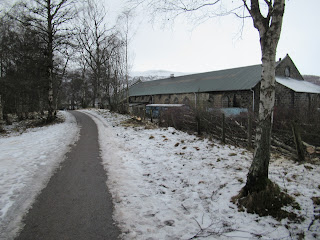 A large semi dead birch was left for another day to be pulled into the site by the Railways forklift as it gets cut down and it is planned to hire in a chipper and operator to clear all the brash (Georgie tried her best to have a wee bonfire first though! - to no avail)

chipper date when known will be advised & help needed ..payment in logs.
Thanks to Mike for photos and Info and Scottish Woodlands for their invaluable help.
﻿
Posted by Neil at 09:40 No comments:

The turnout on Saturday was Georgie, Andrew McCracken, Ian Stanworth, Mike Tough, Andy McClintock and Les Turner. The five of us spent the day breaking up the so called "panels" from the Aviemore big railway remodelling in sunny weather, quite warm considering the amount of snow lying on the ground from overnight and the generally low temperatures we've been having. Mostly this involved the five of us barring out Mills clips and hammering out Pandrol clips to free off the rails. 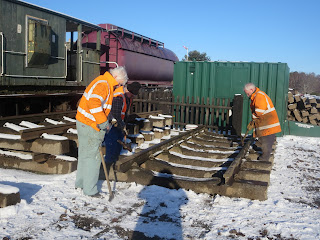 Above Les, Andy and Mike in the process of getting the Pandrols out with hammers
﻿
Inevitably, Mike's well practiced golf swing made him best at getting Pandrols out, 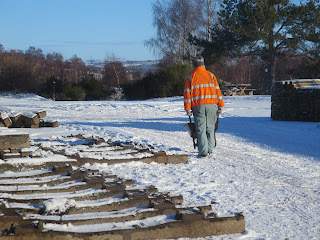 then barrowing the clips and any recoverable pads and biscuits to a number of stillages which Georgie had acquired. above shows Les barrowing clips away. Star at removing the Mills clips (levered out with a hexagonal pinch bar's spade end) was Ian Stanworth. 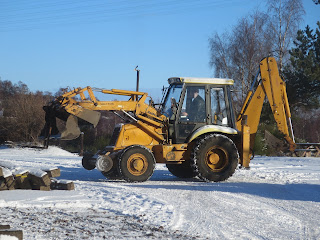 As we worked away at this, Georgie was running up and down the car park with the Railmaster, collecting sleepers and depositing them in one concentrated heap (above), interspersed with the removal of the freed-off rails to a scrap pile behind the water tank.
A bit of light relief was provided by Andy McClintock who having warned us all to avoid the areas of snow that the Railmaster had compacted into ice because it was like a skating rink proceeded to sit down on it himself several times. Unfortunately no-one had a camcorder or smartphone to hand at the relevant moments so You've Been Framed will not be contributing £250 to the p-way's funds!
Many thanks to Andrew McCracken for the above photos and text (maybe he would like to become Co-Editor of the PWay Blog as well as the Members' magazine "The Strathspey Express"!)
---------------------------
Sunday saw Georgie, Angus, Ian and myself tasked to remove trees/bushes obscuring the sight lines between the gabian baskets just South of Broomhill stone arch bridge and mile post 92 1/4.

We used a trolley to move equipment onsite which was a hard push due to the snow covered rails. 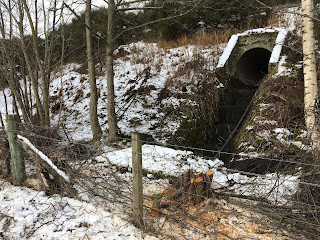 This had us cutting a large quantity of spindly small diameter trees along the fence line and drainage ditch and culvert.
Ian had his new battery powered top handle chain saw put to good use cutting and delimbing trees with the larger ones dispatched with my petrol chainsaw, angus was head brash man, and any high limbs were removed with the pole saw. 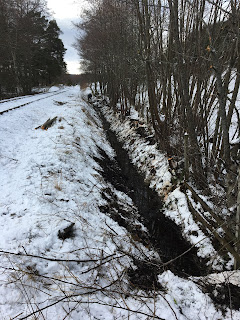 As we cleared a section of brash Georgie followed on with her magic shovel clearing the ditch of any debris and to make sure it was flowing freely, looks fantastic now, wish I’d taken a before pic. Weather was cold, brisk wind and 4” of snow underfoot. Job done by 3pm 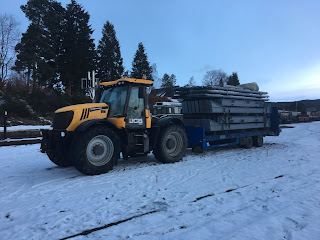 Back at Boat of Garten a giant Meccano set had arrived - for "Operation Undercover"
Thanks to John Wood for all the photos and text.