Eight Volunteers and two Staff made a very good sized squad, the first task was to Slew the track under the expert guidance of Georgie, deciding where and which way - 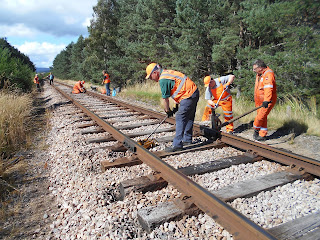 Sleeper ends dug out, Track lifting Jack the (above) right rail, carefully dug out hole for the Slewing Jack by Ben (Mike gave him marks out of ten each time) and then Mike heaves the heavy piece of equipment into position and pumps the handle to hydraulically push the track over by the desired amount, then pack ballast in the voids left at the sleeper ends, drop the Lifting Jack and finally release Slewing Jack - repeat at next prescribed location. 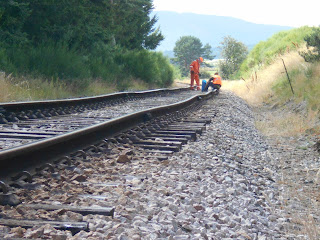 This is the temporary roller coaster view after Measured Shovel Packing (MSP) but before the train runs over it and irons out the lumps and bumps. In the distance can be seen John and Stuart, who all day repositioned any loose elastic spikes and replaced damaged ones (and removed the jammed piece of ballast under the baseplate photographed in the last Blog.) 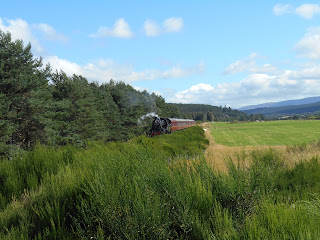 One of these days I will learn how to electronically crop a photo! Anyway the above was taken from the start of the old The Great North of Scotland Railway divergence, which headed over the River Spey and our train from Broomhill approaches on The Highland Railway Line, shocking how quickly the broom has grown at this location. A very tiring warm day meant we finished early and the Inverness contingent stopped off at Carrbridge for a well deserved ice cream.
﻿
Posted by Neil at 22:15 No comments:

On Saturday- Large squad assembled at Boat of Garten and proceeded by car to the worksite at Drumullie, which is about a mile further North. 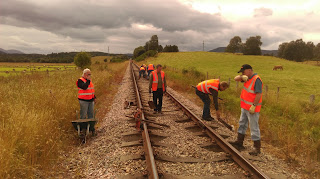 We welcomed Gavin who is armed with shovel in the "four foot" (between the Rails), being his first time I hope we did not over work him! as believe, after doing the Measured Shovel Packing at the dipped joints some slewing of the rails was carried out and finished off by shovelling a lot of ballast at the Level Crossing for safety reasons. Thanks to John Wood for photo & Info.
On the Sunday Myself, Andy and another New face Iain, lubricated the slide chairs of all the points at Boat of Garten and Aviemore, this was made easier as all the Signal Boxes were Staffed and the Points were quickly reversed when the Signallers were asked to do so, thank you Guys. 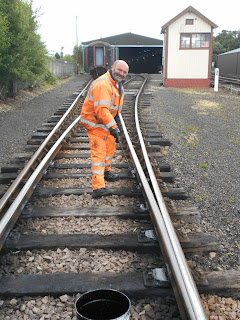 Above Iain doing slide chairs on a set of Hand Points at Aviemore.
In the afternoon, once we had obtained the requisite surplus bearing oil from the Engine shed and a suitable dispenser, we then oiled the mechanisms of all the hand points. 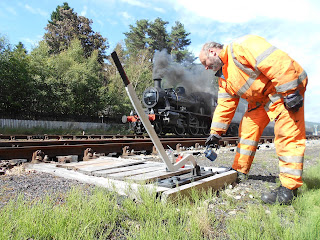 Sure Iain was desperate to glance up at 46512 departing Boat of Garten! 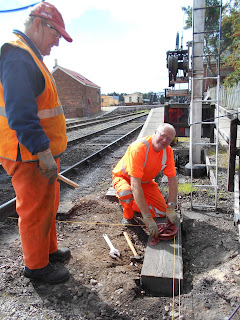 A rare sighting of the S&T Department (Signals and Telegraph) at work! They had the audacity to complain that the New Water Tower is not positioned correctly, as it complicated their new signal wire lines, for the new signal attached to the water tower.﻿
Posted by Neil at 22:00 No comments: