Saturday saw a great turnout again at Aviemore (13 in total), in bright sunny weather equaled two squads - Mike's was a never ending continuation of re-sleepering on the Mainline from old Speyside platform almost to platform at Aviemore. 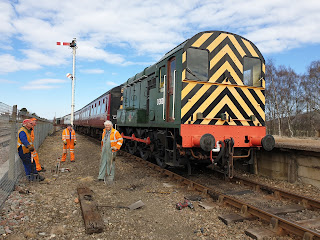 After lunch Fergus (our muscleman!) had to depart, enthusiasm and energy were waning and we all came to the realisation, none of us are getting any younger but fortunately the Carriage & Wagon department had a bit of a shunt to do - meaning we had many breaks thereafter!

Think only seven left to change - drilling not possible as Georgie's squad had the drill! 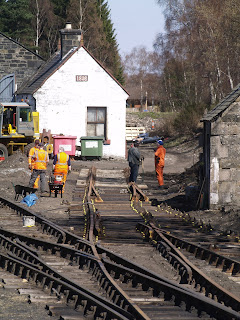 Her squad continuing with track building, (although it seems plenty chatting too!)

towards the proposed new Running Shed at Aviemore, the fine lining was done by bars and, no doubt also huffing and puffing. 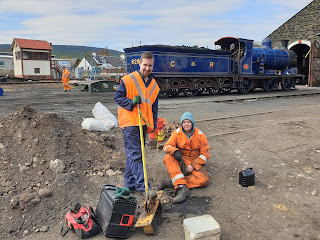 Bart (left) and Justin our newest recruits (conscripts!) still smiling at the end of the day after getting the old switch lever fit for use again, with a less young 828 being readied for a filming charter later in week.

Thanks to all that attended (too numerous to mention) and Roddy for the smaller photos.

Monday morning saw Roddy and me oil the switches at Aviemore and Plumber Jim fix radiators in Spey Lodge and in the afternoon, the three of us

after getting the appropriate Token to take Possession of Boat of Garten - Broomhill Section, we put the motorised trolley on track to plant more sighting posts at the appropriate distances from User Worked Level Crossings - as successfully measured by Jim above (much easier/quicker/more accurate than walking with measuring wheel!) to be continued another day......
Posted by Neil at 21:38 No comments:

Small mid-week squad, fire in the messvan was priority number one, as it was bitterly cold, Georgie complained that I didn't have stoker MacPhail's abilities, eventually we unloaded the tools and proceeded to worksite. 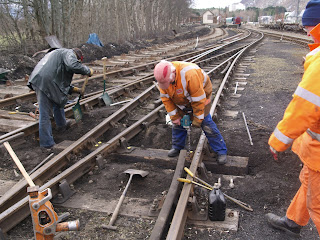 Timber changed for a shorter one as was interfering with new layout. Georgie packing, Mike drilling & Roddy ready for screwing down. 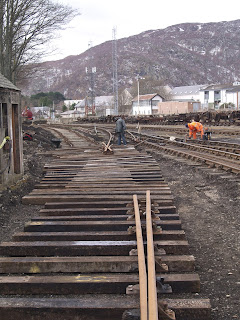 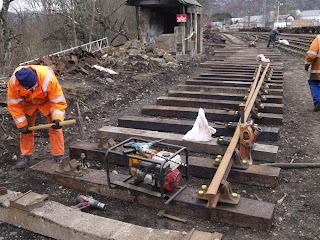 Old ferrules replaced with new, easier said than done, removing old is time frustrating part and couple of AS2 chairs were screwed down, after reaming old holes. 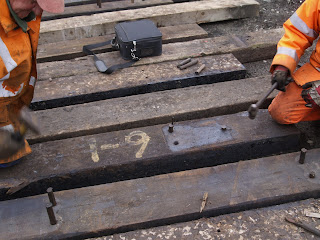 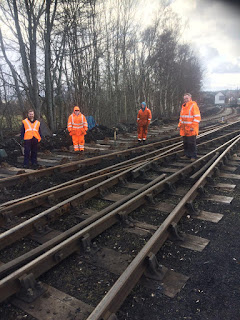 Above looks prior to work commencing (nearly all smiling) and a tad cold!
We welcomed - Bart (left) for the first time, hopefully not his last! Lauren, Justin and almost an old hand now Kevin (far right)
Angus reports "Large squad assembled at Aviemore, promptly split in two - Andrew, Roger and me started plugging holes is sleepers. Holes too small in some, so Andrew & Roger used belt sander in carriage shed to sand down hardwood plugs to size. About  50 plugs done. 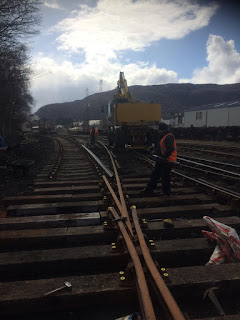 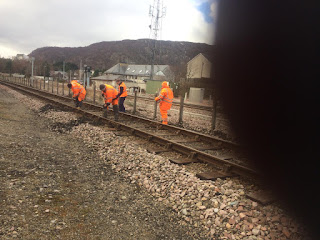 Ian reports from the "heavy lifting squad!" -
"we freed off the stock rails from 2 sets of check rails for the new points as the stocks were scrap, and referuled these and the other switch which was not already in place. We then dug ballast out to permit the fine alignment of the siding towards the former Speyside Bay platform. Following this we dug out the last 2 sleepers requiring changing and changed the first 6 of the last batch for this year from the signal box down towards the switch into the carriage storage shed...although they were not drilled and rescrewed or filled in."
Highland Mainline quieter than usual due to a derailment at Dalwhinnie in the early hours.

Thanks to Ian, Lauren, Kevin, Andrew, Martin, Roger, Justin, Bart & Angus kindly supplied the photos (thumb included) and half report.
Posted by Neil at 21:33 No comments:

The wall which had been built to suit light traffic above long ago for horses & carts, perhaps some timber traffic had failed to cope with the Railway’s mobile plant working near the edge above it, it being the storage area from which ballast is loaded on to wagons by the JCB or Colmar Road Rail Vehicle. 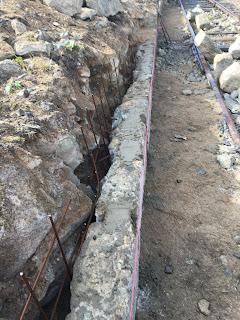 It was established the wall comprised of a thin face of granite maybe 9 to12 inches thick which was not tied to a more roughly built granite rubble wall behind. 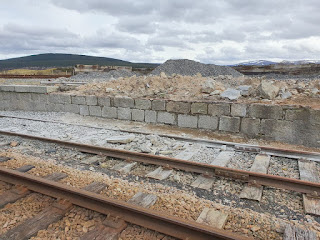 The face was removed, the rubble cleaned back to leave a 9 inch gap & steel rebar was drilled into the rebuilt face & the wall behind the void filled with longitudinal rebar & concreted full height. 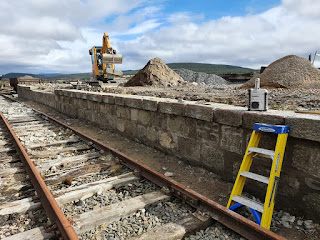 The original granite copes were reused & steel rebar drilled into them & linked in a reinforced concrete beam behind recessed below the wall to ensure the copes will not be disturbed. 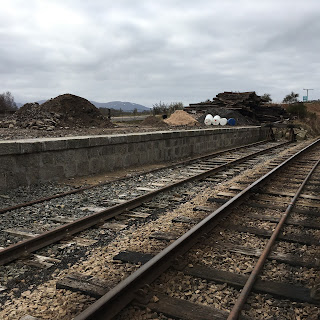 Consideration was given to doing it all in reinforced concrete but the final fine appearance in rebuilt 150 plus year old granite justifies the method used by professional Stone Mason - Alex Walker to whom we are very grateful.

Thanks to Mike for info/photos.

This year we have cut down a lot of trees that were required to be removed for the continued safe running of the Railway, consequently John and Ian decided to redress this Eco imbalance by purchasing & planting a good number of bare root trees around Boat of Garten & Broomhill Stations.

Good Friday & Saturday saw some of the PWay squad assemble at Broomhill Station. 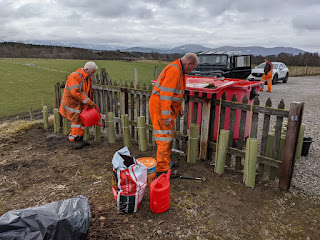 Roger watering and Angus surveying his skills hammering in of the stakes, to support the plastic tubing that Mike acquired. 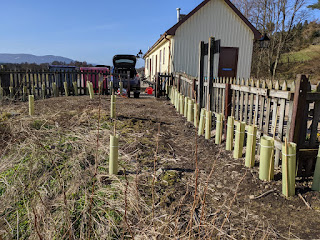 100 bare root beech planted to form hedging along the fence 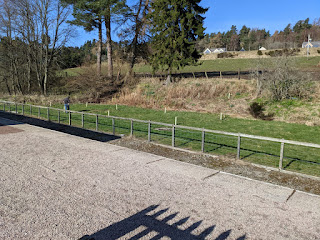 a further 25 assorted trees were planted around Broomhill Station.

Thanks to John (& Partner) and Ian for purchasing and planting, with Roger, Angus and Mike assisting.

on the Black Isle who supplied all the saplings at an affordable price, with some thrown in for free.

At the other end of the line, it is believed that Justin and Angus replaced fishplate bolts at Aviemore Shed and Fergus, Martin and Kevin's (favorite job) - digging out ballast for replacing 17 sleepers close to the Signal Box, with Georgie continuing to lay out sleepers for new work (no photos as yet)

Thanks to John for info/photos