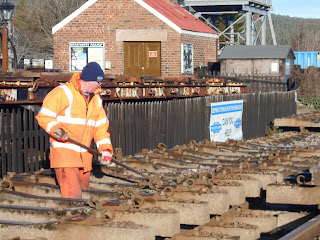 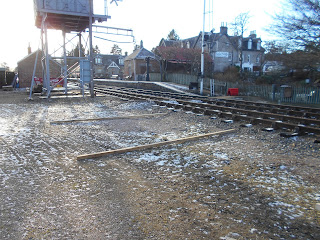 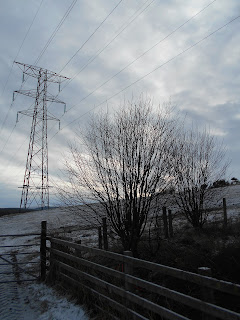 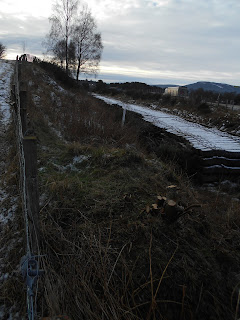 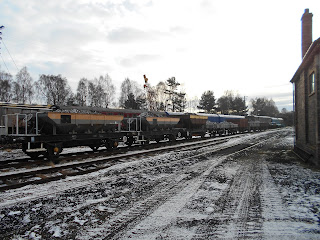 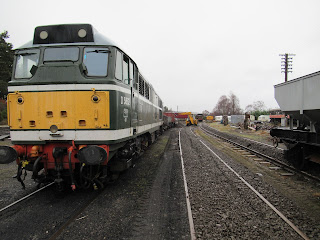 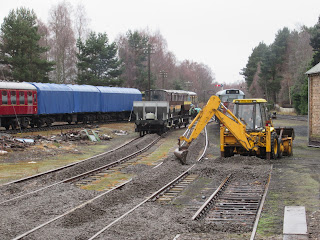 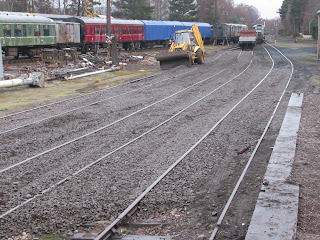 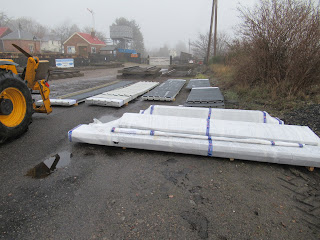 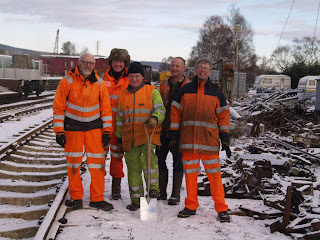 Yesterday a ceremonial cutting of the first sod was attempted, albeit that the ground was frozen solid! (Above Front Left to right - John, Mike, Martin, Back Me (hat on) and Fergus) photo was kindly taken by Roger Snowdon whom is making a good recovery after a recent illness and we hope to see him back for light duties soon. 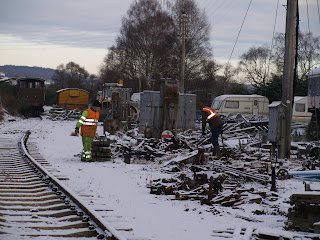 Our first task was to carefully clear all the S&T miscellaneous bits and pieces back to where Fergus is on the right, so that our contractors have 2 metres of trip free access right round the proposed building. 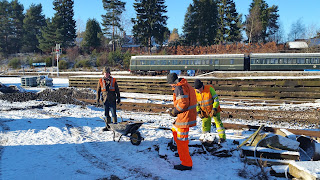 We even found some of our own PWay heavier material - base plates/chairs etc that we barrowed clear. In the background can be seen the wooden/soil loading bank which unfortunately, much to Georgie's sadness, also has to go. (Note also Rylock fencing below Boat sign for later) 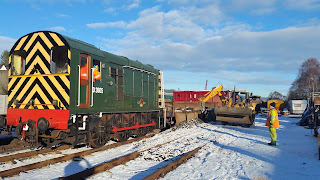 Georgie also continued unloading spoilt ballast - which was donated recently by Network Rail at Aviemore, to level the entire site. 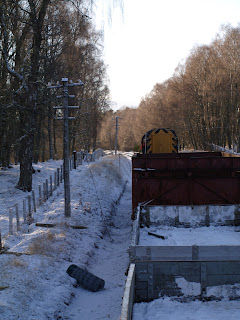 An almost empty train was loaded, marshalled and despatched, by the time it arrived in Aviemore, it was devoid of the fencing material (thanks to John & Fergus) required on just over of a mile of fencing to repair and be made stock proof using the aforementioned Rylock as above now strategically placed at 100 metre intervals in the Up cess. 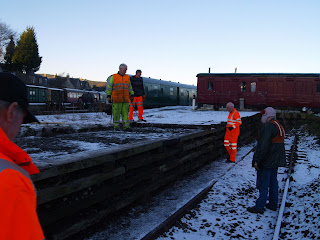 To keep us warm as the sun sank, a start was made removing the sleepers from the top of the bank and 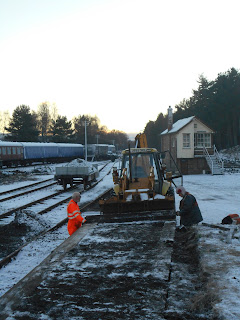 duly taken away by Georgie.
Thanks to all whom attended much was achieved but still an awful lot to do in such a short space of time..... Mike advised that "steel & cladding material are due to arrive 25/1/19 then hopefully foundations will be cast early February and finished by March" - weather permitting.
﻿

First PWay Weekend of 2019 saw as expected, a small dedicated squad, tackle possibly the least liked task of all - (as illustrated by PWay equivalent of "The Scream" by John Wood below) 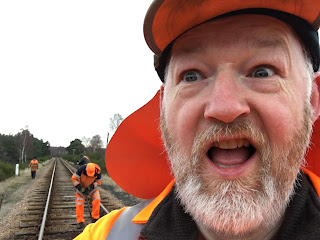 digging out sleeper beds in preparation of the never ending maintenance of the Railway Line - in the form of a continuation of re-sleepering towards the Summit between Aviemore and Boat of Garten, which we spent from March to July doing last year. 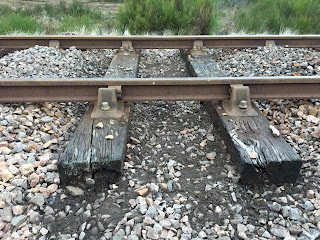 Above two adjacent life expired sleepers meant the whole bed must be dug out.
John reports Saturday -  "We managed 66 of 128, 42 being done by an earlier squad leaving 20 to be done, and no pesky trains to interrupt us either. Georgie noted that some of the sleepers to be changed were originally from the 1930s, so due a well earned rest me thinks (lets hope the replacements last that long!) Weather was cold but ideal for the task in hand."
Thanks to Georgie, Mike, Martin and John - especially for info/photos (well one of them anyway) 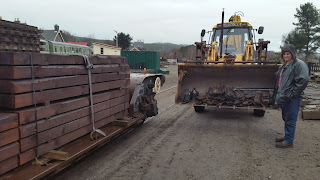 Today saw an even smaller squad of Myself and Georgie dig out the remaining 20 beds before lunch and after we sourced 36 skirted cast fishplates and 36 skirted rolled fishplates, these are to be changed in connection with the re-sleepering of the 18 lengths of track. We loaded them into the "flatrol" wagon with all the new sleepers (as above) to be delivered to site by rail. 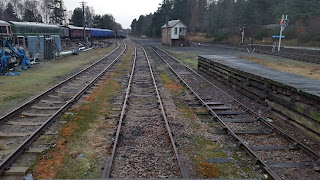 Above and below is the site of the proposed three road storage shed at Boat of Garten, devoid of the usual rail vehicles. 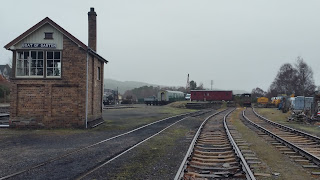 Mike Tough who has worked tirelessly for Months already on this project, hopes that a start can be made by the local construction contractor Nethy Steel Ltd sometime soon.
Posted by Neil at 20:20 No comments: