(No Members of Scottish Parliament were spotted - just plenty lorries on A95!) 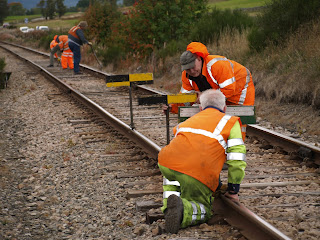 Sighting boards used to measure how much the rail has dipped, by taking the readings from the adjustable scale centre board at each sleeper 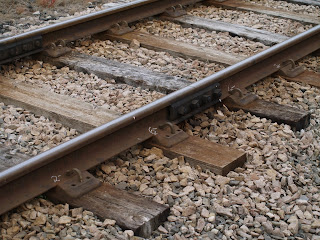 and then written down on the web of the rail 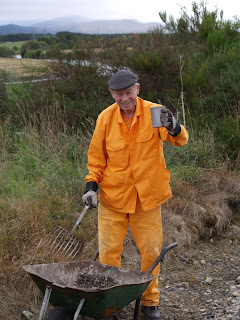 reflecting the number of cans of "chippies" that need to be evenly spread below the sleeper,
(one can = 1/16 of an Inch lift ) 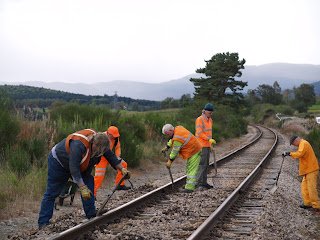 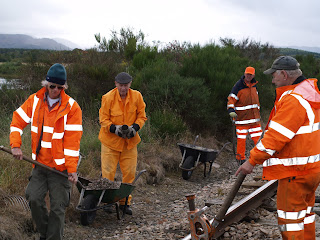 so that the swan neck shovel with requisite amount of chippies can fit under the jacked up sleeper and spread evenly. Above left to right in foreground Bruce, Dave and Reg - all up on separate "Holidays"! 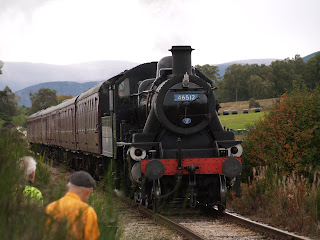 Well done to all that attended this unexpected mid-week "SAGA" day, in total one 60 foot length got a considerable lift and a number of dipped joints were also rectified.
Just a pity there weren't more trains to give us more breaks! as we all found it hard going.
﻿
Posted by Neil at 20:52 No comments:

On a Monday in September, when the weather was good, a group of volunteers assembled and set up to weed kill along the line. 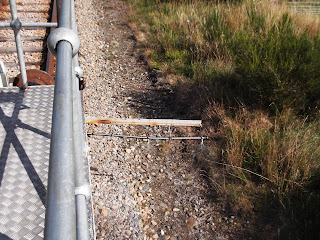 New nozzles had been fitted to the wagon with a broader spray pattern to the 'arms' of the wagon that spray the cesses (above) and these were seen to be successful - so much so that the rest of the nozzles will be changed for next time. 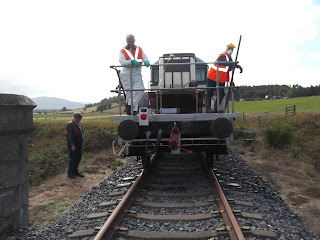 The whole of the line, from the Network Rail boundary to the Dulnain Bridge (above) was sprayed well within the day, including loops, but not including the yards, which were hand sprayed by a contractor earlier in the year. 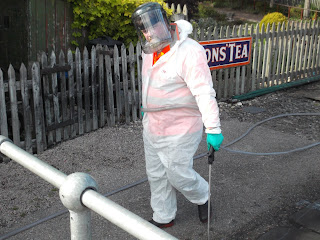 With some pesticide left over, and some time available, the platforms at Boat of Garten were also treated, using the long hose from the wagon on Platform 1 (above) and a backpack sprayer on Platform 2 (no image). Thanks to Georgie for getting things ready, Stevie for driving the Class 31 and Mike and Roger for working hard through the day. Some tweaks to our process will be incorporated for next years weedkilling, but the line is really showing the benefits of additional pesticide treatments. 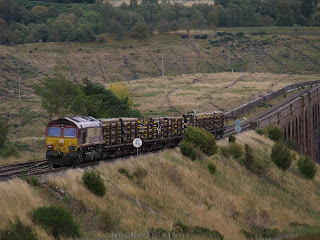 And when the lineside is not kept in check! (above) on the Big Railway yesterday - the 6X88 - Hartlepool to Georgemas Jn "Pipes", having struck fallen branches just south of Culloden Viaduct, proceeded under authority at very slow speed until unfortunately the first two Locomotive wheelsets derailed at the first set of switches, closing the Highland Main Line for most of the day.
Thanks to Ian for Weedkilling text and photos and Mike for the Big Railway photo.

Every few years the PWay Squad get to informally "Inspect the line" from the comfort of the Watkinson Trust's - LMS Inspection Saloon being kindly added to the service train for the day. 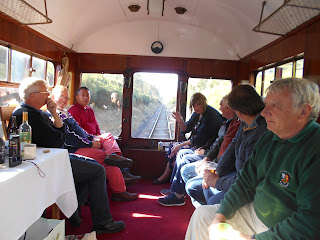 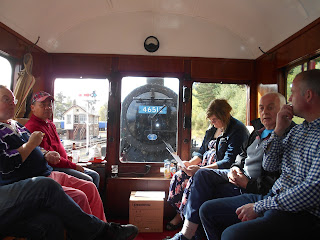 and the sights sounds and smells when directly behind the locomotive. This year we had in addition to our own usual liquid refreshments, for the PWay anyway - Gourmet Fine Dining! (soup, pies and sausage rolls) provided by our own Strathspey Railway Catering department, many thanks to John -Head Chef, Howard -Sous Chef and Lucinda-Front of House and below Photographer! 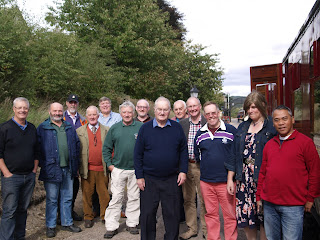 Above is a group photo hastely arranged on Boat of Garten platform, of the first sitting of the hearty soup etc, the Strathspey Railway Co. AGM attendees had the late, on the 2.45pm departure 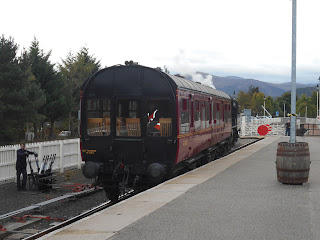 The Saloon being shunted off, with Tommy at the ground frame -whose tireless efforts sourcing, fitting, replacing and testing 46512's steam brake, since her failure on Wednesday certainly paid off.
Many many thanks it would not have been the same behind a Diesel Locomotive.
I thank all those that attended and hope that they had an enjoyable day and look forward to suggestions for next years trip/event......
﻿
Posted by Neil at 09:35 No comments:

For the first weekend of the repainting, between 24 – 26th August the Ellon Team of Ray Kenyon, Nick Courtier, Jim Pittendrigh and Colin Frost were ably assisted by Malcolm and Marion Timperley, Neil McQueen and Mike Tough.  Marion and Malcolm completed the painting of the tops of the 13 windows on the platform side, and the remaining team commenced preparing the hotel side – or main entrance. 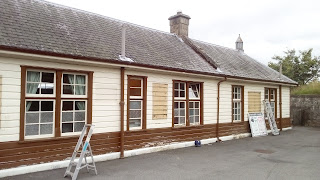 First jobs were to remove the display boards from the walls, rub down the existing paintwork 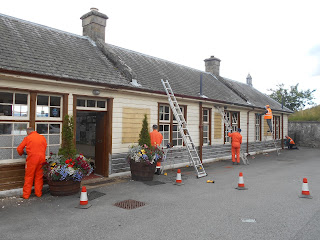 Above left to right -  Nick Courtier is replacing defective putty in the windows and Jim Pittendrigh is continuing the sanding, Colin adjusting ladder, Ray sugar soaping, with Mike applying undercoat to the rapid drying aluminium oxide primer that was applied to the bare wood. (rest assured Ian no flowers were harmed during this production line) 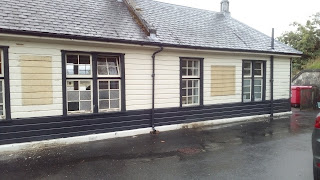 On the Sunday the weather was not kind to us, but by the end of the day  we had applied the undercoat to all  the brown painted areas and primed and undercoated the metalwork on the pipes and gutters.

For the second weekend 31 Aug to 2 Sept the team consisted of Ray Kenyon, Jim Hardy and Colin Frost from Ellon and Mike Tough and Robert Walters. 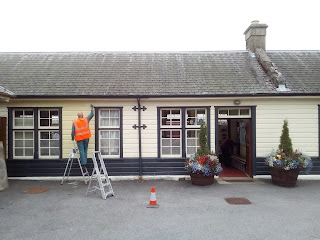 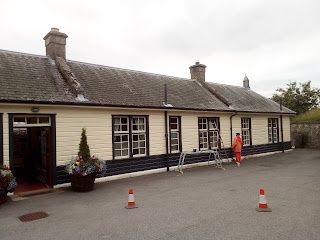 ﻿
The over Friday and Saturday the remaining windows requiring new putty were completed and the cream areas of the walls and windows were sanded and undercoated, and Jim Hardy was able to commence applying some cream top coat. 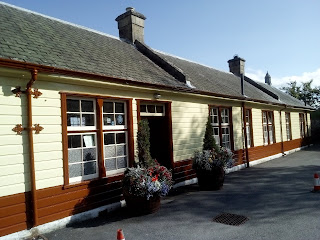 By the close of play on Sunday all the walls of the building had received a top coat of Cream or  Brown paint.
This just leaves the top coat to be applied to the windows - and that will be another job successfully completed.
Thanks for text from Colin Frost and photos courtesy of Ray Kenyon.
====================================================
Meanwhile Permanent Way work continued - on Saturday 1st September, with Georgie (after another timeous departure of the Royal Scotsman), Mike, Fergus, Roger and Ben attending to many dipped joints in the area of "Fishermans' Crossing", by the dark art of Measured Shovel Packing. 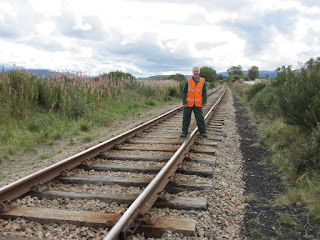 Above Ben Tyrell, whom we haven't seen for a while but has been kindly refurbishing one of our chainsaws at home - So we shall let him off !
Photo and Info from Mike.
Thanks to all concerned. ﻿