Georgie had asked for as many Volunteers as possible this Weekend, I received more apologies than attendees, for a multitude of reasons - unfortunately some in the Get Well Soon category, for which we do hope for a speedy recovery indeed. 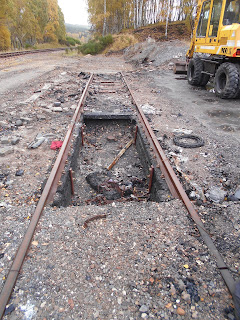 The first part was removing the short rails, above remnants of the old charred inspection pit. 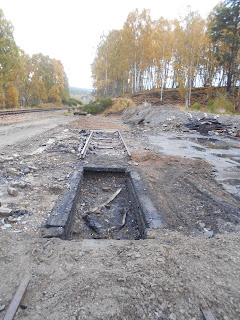 This involved digging out the fishplates and removing, likewise all the track screws and finally the rails - took longer than you would think but it certainly warmed us up! It is hoped the pit is to be deepened and lined with concrete. 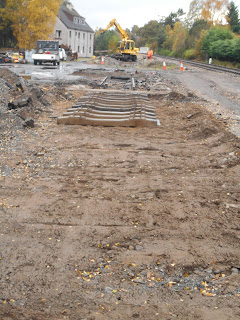 The rails this time are to go right through the new shed, so Georgie using the Road Rail Vehicle (RRV) gave the formation a final scrape using Mike's Engineer laser eyes as a level guide! Then RRV took sleepers to site two at a time and Roger and me did our best to line up with existing rail ends at 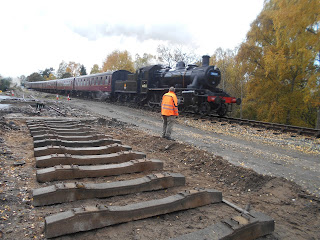 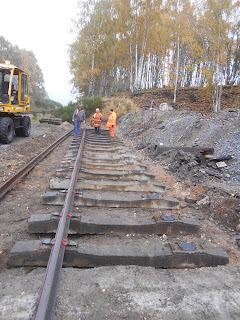 After lunch Georgie had got the rail grab, so the 60 foot rails could be manoeuvred into position, just a case of laying rubber pads, inserting red plastic biscuits and clipping up (easier said than done) I had a birthday meal to attend so could only stay until 2pm but left it in the good hands of Jim, Mike, Peter, Roger, Georgie and I am sure they got on better without me! (Mike subsequently updated - We packed then slewed using RRV with Jim and me eyeing in and apparently Georgie was impressed! A tidy up then finished of the day)
﻿
﻿
Posted by Neil at 13:59 No comments: 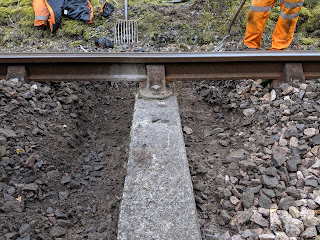 Above shows a dug out "Wet Bed", with the tell tale markings on the rail where pooling water is splashed upwards when a train encounters this watery dip in the track, over time leaving what I think are called fines. To rectify the problem the poor contaminated/clogged up ballast is dug out below the level of the sleeper to drain any trapped water, then the dark art of Measured Shovel Packing (MSP - covered many time in previous posts) is applied and finally fresh clean ballast is filled in to aid future drainage.

Two more Beds were attended to, further towards Dalfaber and Reg Stanley who must have felt as if he had walked from his home in Wales to get to the worksite! Joined the bigger than anticipated squad. Ian and Iain also checked/tightened about a mile of fishplate nuts. 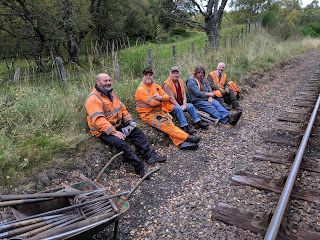 Iain, Ian, Reg, Georgie and Roger enjoy the mild dry weather (Fergus may have been looking for his next fencing job!) 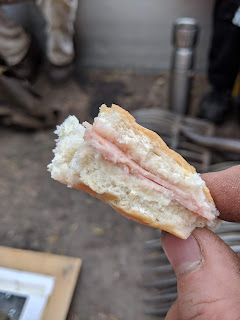 and John Wood enjoyed his lunch, to whom I thank for all the info/photos, to make this Post possible.