Bill McCarthy reports -The Electrical Department improvements at Boat of Garten Station continue
- above "New Lamp we have fitted to the Gas House. We also had help from Benny in the Engine Shed to modify the bracket to take the lamp. Nick Winter fitted the light and external waterproof switch and Neil Ellision shot blasted and painted the whole thing"
Thanks to Bill for the info and Nick for the photo.
Continuing on from last years very successful mammoth Station re-paint at Boat of Garten, Colin Frost and the Ellon Gang were asked to paint Boat of Garten South Signalbox - possibly portrayed to them as mostly a brick building with a few windows! 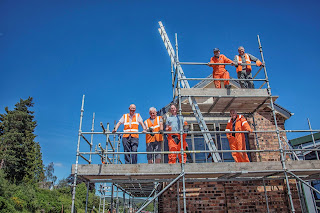 Top with cap on is Colin and right is Ray, others are mentioned later - Simon Smith whose hobby is photography took this image and others, that may appear hopefully in the Strathspey Railway Website in due course. 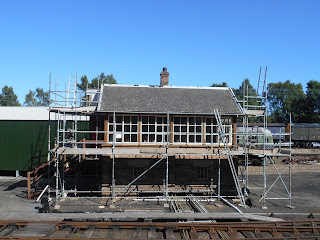 They rose to the challenge and so did the suitably contractor tagged scaffolding. 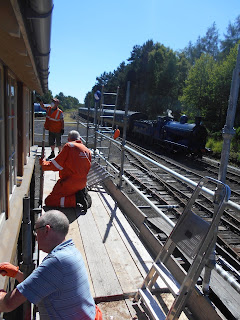 The weather for the Monday and Tuesday was terrible rain/drizzle for Colin and Ray but the day we the PWay squad agreed to help was glorious (might have been too hot to work on the Track anyway) Myself, Roddy (closest above) and Jim (next) were detailed to sand down windows and paint with undercoat. Mike did some joinery work and replaced window putty that was life expired. 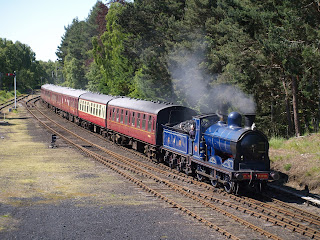 All in all we had a good day and hopefully we assisted the Ellon Squad. The mid-afternoon ice cream provided by the Station Mistress - Eileen Scott was much appreciated by all. 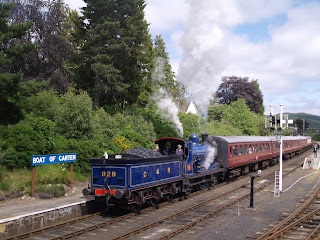 As were the new temporary vantage points 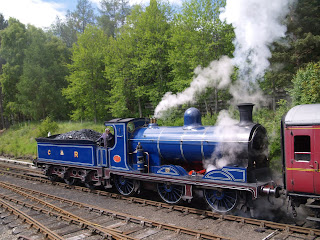 provided by the scaffolding.

On a bright Saturday past, Ian Stanworth and John Wood under the Supervision of Georgie, put their Strathspey Railway Association sponsored chainsaw certificates to good use, clearing sight lines from both Signal Boxes at Boat of Garten and Morley's North Yard. 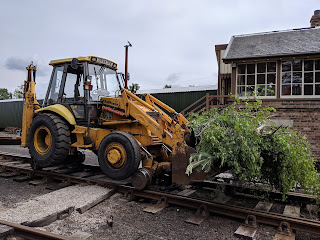 Various branches and small trees cut down and taken away by JOKK the JCB to Boat of Garten Yard.
Then onto Broomhill to repeat the process.
Spot the difference! 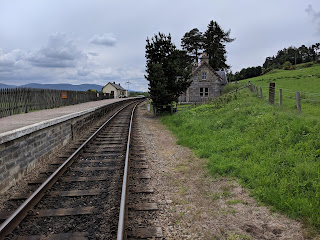 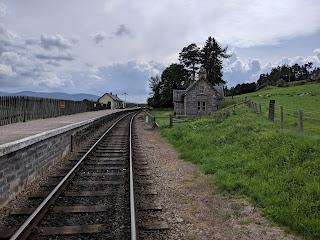 Hopefully improve the sighting for Broomhill Level Crossing, by 4pm job done, as were the chainsaw operators!
Thanks to John for info/photos.
-----------------------
Network Rail and Bam Nuttall as agreed, provided a 360 degree Road Rail Vehicle, bogey and operator to Strathspey Railway for one week starting Monday 10th June. 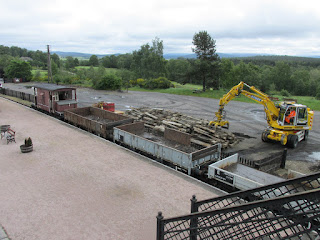 The first task was shifting the concrete sleepers (which are the remnants of some of the short track panels, painstakingly broken up from Aviemore Mainline works - see Blog 12 December 2018) from Boat of Garten Car Park to the Great North of Scotland Railway (GNSR) trackbed North of Morley's, using above machine to load, unload our P'way train hauled by the recently repaired ex BSW shunter locomotive, driven by Steve Robinson, with Georgie Supervising proceedings.
Strathspey Railway is very appreciative of the assistance given here by Network Rail and Bam Nuttall.
Thanks to Mike Tough for info/photo.
﻿
﻿