The second week of painting was from 2nd to 6th July, and this picture shows how it was left after the first weekend, when nearly all the undercoat had been applied.

So on Monday Ray and Colin completed the undercoating and we were joined by Dick for Tuesday and Wednesday when the brown top coat was commenced.

Great progress was made on Wednesday with the very welcome help of four fiends from the P/Way Mike, Neil, Martin and Iain.  The gutters were painted and a start made on applying the cream. 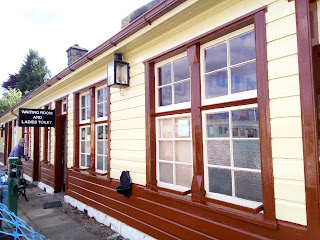 Ray and Colin continued on Thursday and Friday, but some time was lost with a mix up in the brown paint supplied, still all the brown was complete by Friday evening and Mike returned the following Tuesday to complete the top coat on most of the windows, thus allowing Ian’s great floral arrangements to be put in place ready for the 40th anniversary celebrations. 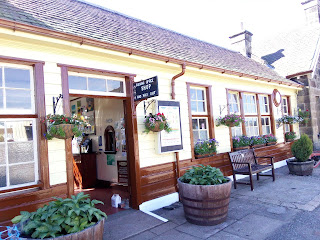 Next task for the Ellon Team, paint the other side!
Thanks to Colin Frost photos/text.
﻿
Posted by Neil at 08:43 No comments:

The PWay Squad met up at a rather busy Boat of Garten Yard, there was a Steam Gala on  and were delighted to see the following timetable 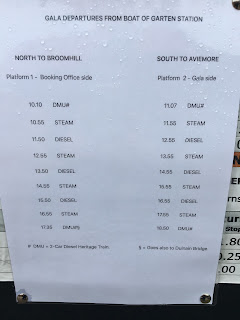 as this meant more BREAKS!
(as contrary to popular belief we cannot work on the track when a train is passing) 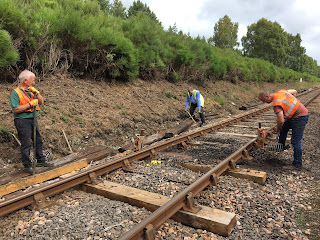 All proceeded to worksite near the summit between Boat and Aviemore and soon got down to hard graft. Above photo left to right "Mike -The Bar- likes leaning on them, both kinds! Pete -The Tongs- sleeper mover extraordinaire and Fergus -The Grape-loves shovelling ballast." Iain -The Bike- turned up again on his bike later and the Photographer John was more than dismayed to discover that the petrol driven Bance was out of action and he only had 42 chair screws to screw down by hand with the T bar. 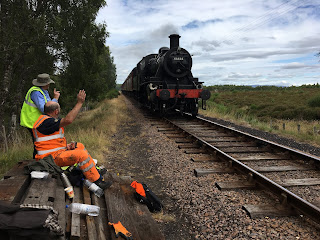 Talking about tea, Pete and Iain take a well earned break from the scorching temperatures as 46512 passes (with an identity crisis?) 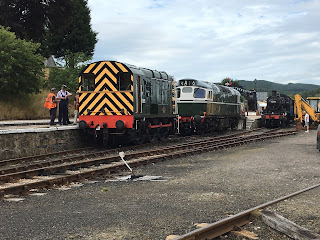 All the sleepers were eventually changed and John used his Pole Saw back at Boat of Garten to remove sizeable tree branches that were obscuring Signals - both Signal & Telegraph and Satellite! from a neighbouring property. 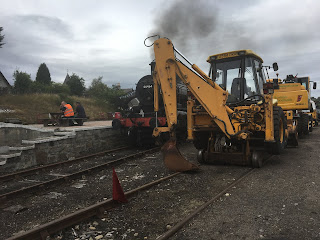 Even our friends Scottish Woodlands had their Rail Plant on display with our trusty JCB acting as a barrier vehicle.
Thanks to John Wood for the Info and photos and he thanks Georgie and Pete for the lifts received.
﻿
﻿
Posted by Neil at 08:47 No comments:

Over 22 to 24 June the Ellon Team commenced the re-painting the station, greatly helped by Robert Walters who had previously spent four days sugar soaping the building (apart from the doors).

The preparation prior to painting took 10 man days, and this was completed over Friday and Saturday.

This was the sight that greeted the Curry train special on Saturday evening. 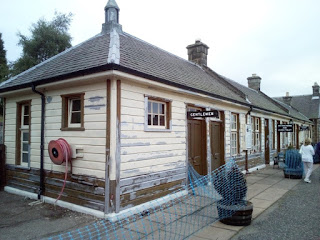 On Sunday we continued with the undercoating and with a further 7 man days spent, all the cream undercoat had been applied along with about three quarters of the brown undercoat. 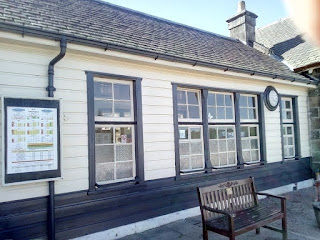 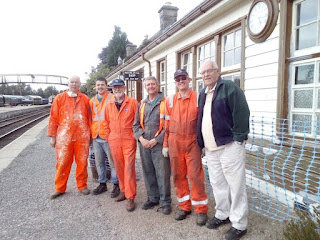 Round 2 will commence on Monday 2 July.

All the above kindly supplied by Colin.
﻿