The centre spread of the last Strathspey Express showed a few of our motely crew posing after yet again having to dig out the silt deposits, contaminating the ballast caused by the run-off from the A95 Trunk Road at Lynchurn No2 Level Crossing (LC) 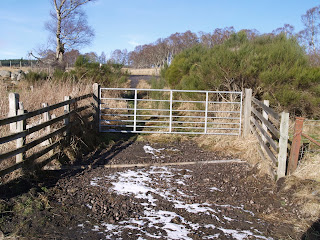 Recently Georgie has hopefully now solved the problem by digging a graded channel and lining it with old concrete, diverting the excess water and silt into a very close by burn. 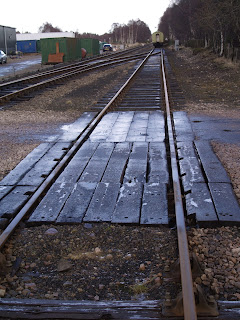 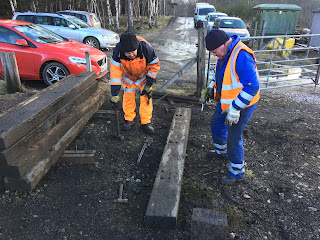 The old crossing sleepers were lifted out, with Martin and Angus retrieving the screws using the new impact wrench and de-nailed, which was no mean feat as the nails were 10 inches long and 3/8s wide! Meanwhile the old wooden packers, ballast/soil cleared out and levelled off. 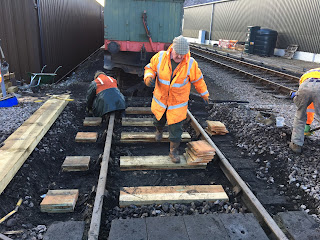 The 1 Inch thick treated packers were cut into 45 individual ones of correct size, which were also levelled off (maybe Roger above is doing that, or heading for Tea!) and screwed onto the sleepers. The timber came from Raddery Sawmill on the Black Isle, being the most local that could be sourced for the large size that we required. 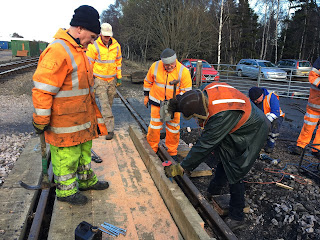 65 holes drilled with the coach screws countersunk, with a bit kindly sourced by Nathen and Tommy from The Shed, as we had misplaced ours (which was potentially disastrous). Ian and Mike arrived having been at an Association meeting as the above outermost new crossing timbers were notched by Georgie to accommodate the rail chairs. 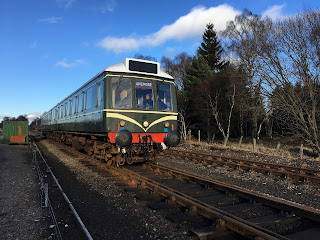 The passing Rail Traffic was in the form of Class 117 Diesel Multiple Unit (DMU) which appeared to be very busy.

﻿
Thanks go to Martin, Angus, Roger, Bruce, Ian, Mike, Georgie and John who supplied most of the info and last 5 photos.
Posted by Neil at 14:43 No comments: