There was a good turn out but only Georgie, Ben, Roger & Mike ventured out onto the track where between mp 91 & 91 1/2 (Croftnahaven) various routine maintenance tasks were dealt with. Other essential things had to be done however by the others. Those outside enjoyed a pleasant Autumn day in a peaceful spot 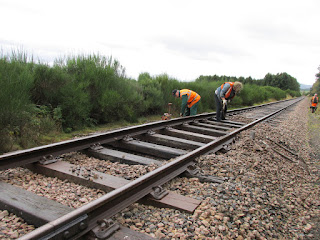 Above -Digging out below the high rail sleepers ..this was dug out maybe 30 mm & left to settle

Also present were Ian who assisted Ian Stokes a Volunteer who was digitally surveying the yard at Boat for a site for a storage shed Strathspey Railway Association are planning to progress. Ian also had to assess tree clearance needed at Aviemore Head shunt & was then with Neil Howie who appeared with a former work friend also Mike & they got into the faulty jacker packer & it seems the problem has been found & the machine will be in action soon. Valuable spares were retrieved from the other machines & taken inside where 2 almost new rail saws obtained by Davie Dow from a railway yard in Glasgow were spotted & admired .. well done Davie.
The track work included clearing ballast from below around 10 sleepers at mp 91 1/2 on the up rail to get rid of a horrible hog in the up rail top. By the end of the day the trains had got the rail back to level & this was lightly repacked & left to bed in further.
Afterwards & without Andy the expert measured shovel packing (MSP) tin man we did MSP at maybe 10 joints & dips around the curve & got a well done from the boss.
﻿ 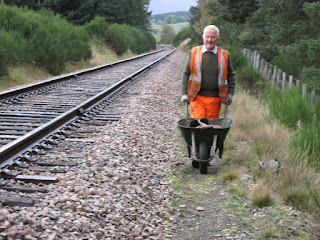 An out of focus Roger focussed on getting chippings to the MSP points.
Thanks to Mike for the above information and photos. 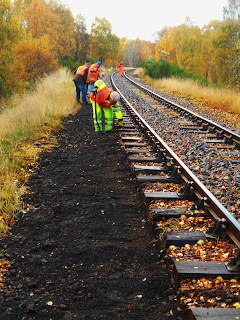 Yesterday's P'Way saw another calm dry Autumn day, the location very close to Kinchurdy Bridge and the task was to dig out the sleeper ends to start the improvement of the drainage, above Mike in foreground, then Fergus, Andy and in the distance Martin Macleod fortuitously filling in a gap in the Track Inspection Roster (Lennon his high viz dog off camera but thanks go to both of them for this vital task) 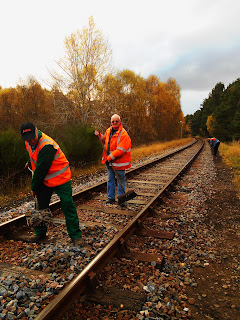 and renew the ballast shoulder which was previously dropped in the "four foot" (between the rails)  Ben with a grape full of fresh ballast, Andy brushing the dirt off the sleepers and Georgie trying to tidy up our efforts on ballast shoulder and level cess. 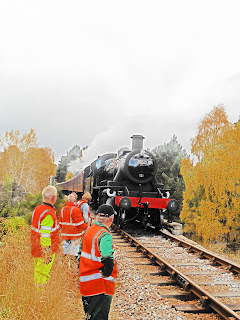 Last Down train of the day passes over Kinchurdy Bridge and thanks to Fergus for clearing out the steps down the steep embankment, making it an easier walk down to our cars after an exhausting day. 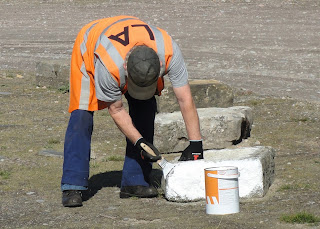 As promised Reg Stanley above and Bruce Buswell below, painted the recycled platform copings and sleeper stop at the well end of the turntable at Aviemore, they also painted the granite blocks that guide road vehicles safely round the exit to car park. Reg continued with painting the base stones to the new sign by the turntable (I am sure the fruits of Reg's working holiday will take sometime to spot around the railway) 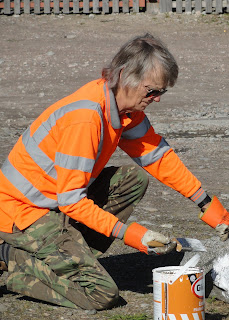 Bruce thought it was "an act of geological vandalism" obliterating them in white masonry paint! 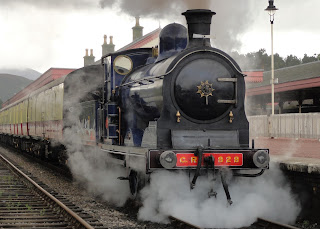 828 departing Aviemore with the Sunday Dining Train 24th Sept.
Above photos and info all courtesy of Bruce. 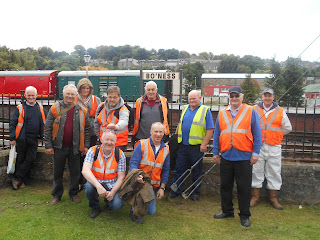 Saturday 23rd saw a number of us from the PWay squad (above) get a guided tour of the extensive site at The Bo'ness & Kinneil Railway. Many thanks to our guide Steven Ramage (above back right) who gave us our behind the scenes view and threw in a visit to the on-site Museum of Scottish Railways (well worth a further future visit), we then returned to where we had had breakfast, the Station Café for a cheap wholesome lunch before using our Strathspey Working Members Passes for a trip up to Manuel and back, washed down by a beer or two. All in all a worthwhile day out.