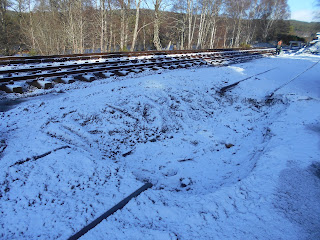 Hopefully in the not too distant future the above "bomb site" will once again be an inspection pit inside a shed! 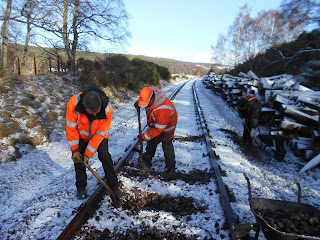 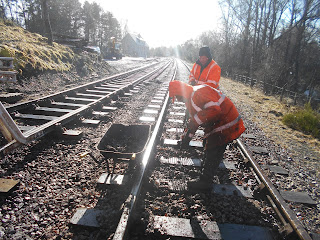 ﻿
it into the "6 foot" between the mainline and the recently created siding, above Roger and Graeme at the start and end of the tiring day. 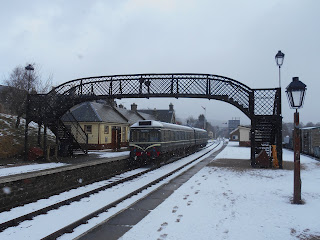 Fortunately Roger had got the Brakevan stove toasty in the Dock at Boat of Garten, so we had extended breaks throughout the day in comfort, above the Diesel multiple Unit pauses at station enroute to Broomhill.
﻿
Posted by Neil at 08:59 No comments: 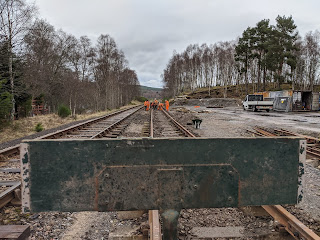 First tasks, slew the assembled siding 6 foot 6 inches from the mainline to ensure the were no gauging issues, then move timbers and sleepers to the  Boat end of the worksite ( Ian and Georgie ) with the Road Rail Vehicle (RRV)
John, Fergus, Angus & Roger replaced all the temporary fishplate bolts with the correct length items (as they could not be sourced first time round!) 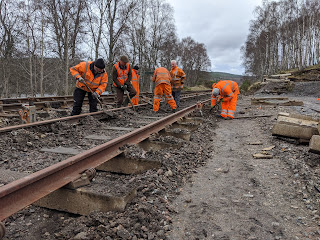 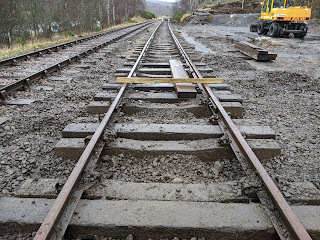 Lastly we dug out six beds to accommodate the cross timbers which will be used to locate the new RRV rail traversing platform to enable the RRV to get onto both the siding and the mainline in a timely manor. 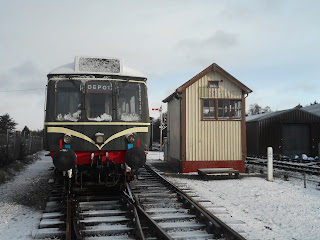 Good to see the DMU out with fare paying passengers aboard" (seen above at Aviemore, poised for Service on the Sunday)
﻿
Posted by Neil at 09:55 No comments: 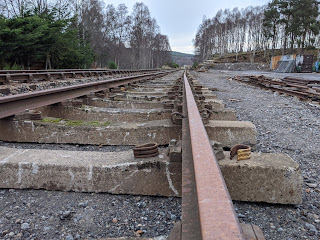 "Georgie, Andrew and myself, unloaded short rails and some other rail parts at Morley's from the PWay train, one long, one short bolster wagon, brake van and the wee shunter using the Road Rail Vehicle (RRV)
Wooden sleepers were slung and moved with the RRV to bridge the gap in the proposed siding up to the buffer stop, then 60ft lengths of rails were put into the previously laid concrete sleepers, Mike, Ian and Jim pitched up to assist after lunch. The 60ft rails were then clipped up (Mills clips ready to be hammered in above)  and fishplated, with the closure rails cut to length at the buffer stop end. Job was just about completed with just 120ft to be clipped before we called it a day. 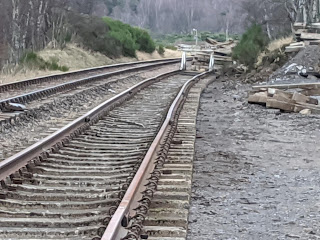 Didn't manage much in the way off photos as it was bitterly cold wind, I wasn't taking my gloves off lol. Photos show finished siding to be slewed leveled and packed in the future."

For some Months now, the PWay squad have, as in previous years been seconded mid week on a temporary basis to the Carriage & Wagon Department to help clean and polish the carriages of the Strathspey Railway. The warm environment of the modern shed are indeed quite inviting at this time of year. 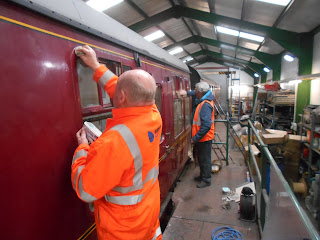 As is usual, its teamwork that gets things done, Angus and Andrew apply the polish 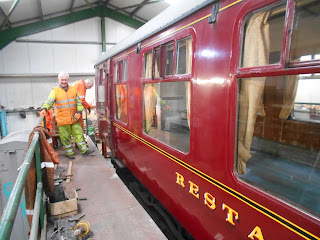 Mike and Jim remove it. 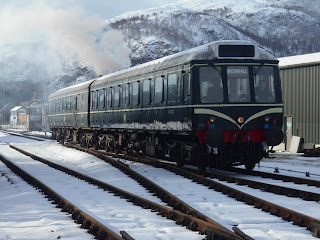 Meanwhile outside in the cold, the first of the mid-week Diesel Multiple Unit (DMU) Services convey a handful of passengers admiring the Winter scenery, just visible through the diesel induced "clag" are the Signal Boxes at Aviemore our one working and Network Rail's one now redundant. 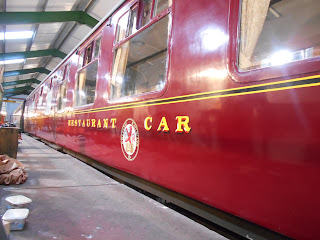 The above "RU" - Restaurant - Unclassified - meaning it caters for 1st & 2nd class passengers, was last repainted in 2013 and now looks as good as new!
Apparently going to get an internal makeover - perhaps it might feature in   https://restoringcoachesataviemore.blogspot.com/ in the future?
Many thanks over the past Months to - Angus, Andrew, Mike, Jim, Bruce, John H, Martin, Roger, Les, Roddy Roderick and many more I am sure!
Rumour has it there may be a "quick paint job" of a carriage to keep us busy!
Posted by Neil at 07:51 No comments: 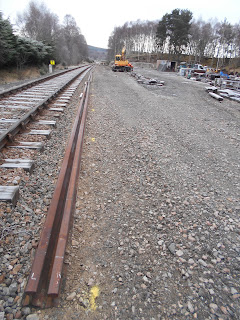 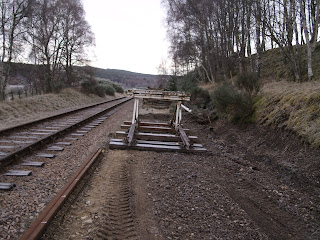 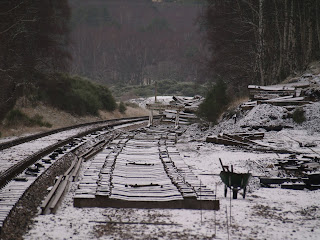 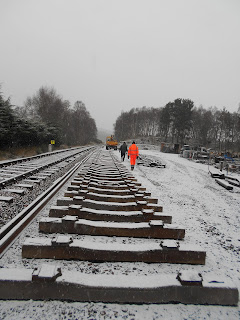 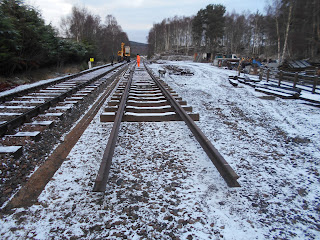 Another excellent turnout from far and wide, to start construction of the track into Boat of Garten North Yard ("Morley's") 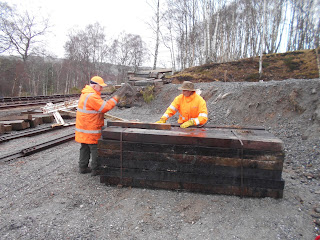 Roger gets High Speed instructions from Kevin, on how to break the metal securing band on the second hand sleepers. 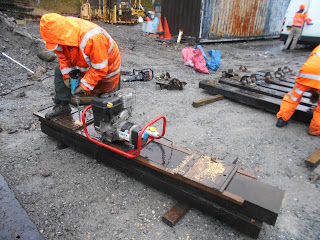 Using the well built sleeper template, constructed many years ago by Hamish MacKay, the holes are pre-drilled to gauge again by Roger ( Octogenarian learning more new skills!), in the pouring rain. 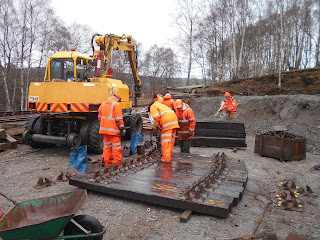 Quite a production line was in operation - getting the chairs, new ferrules tapped in, screws dipped in creosote then tapped in and finally screwed down. The 24 Network Rail sleepers bought from Doncaster, soon turned into very useful components for building an eventual bullhead track panel (I guess!). 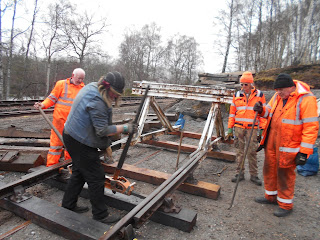 Meanwhile another team got to re-build the buffer end, which was surplus to requirements from the Network Rail re-modelling scheme at Aviemore last year. Georgie using the rail jacks to get the correct gauge. 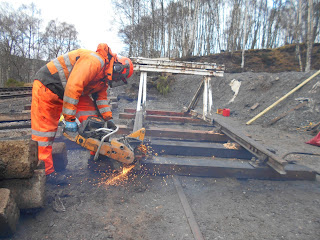 Above John carefully cuts, the previously crude gas-axed rail ends, so that they can be fishplated up eventually, once the rail drill has done its job. A fair bit of huffing and puffing was required to try and get buffer end true and square.
The Gang worked through the weather elements and a lot was achieved. Thanks to Jim, John, Ian, Bruce, Kevin, Angus, Roger and of course Georgie.
﻿
﻿
﻿
Posted by Neil at 20:15 No comments: