The P'Way for 19th/20th March was cancelled as Georgie was required to drive at the first Diesel Gala Weekend and other members of the squad assisted with Brake Van rides and Track Inspections, 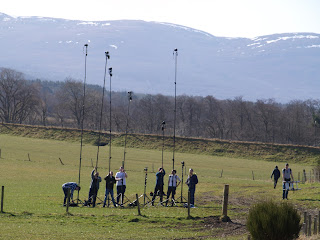 hopefully the lofty cameras pointing at what's on the track and not the track itself, as the run round loop here at Broomhill is due packing at some point in future. 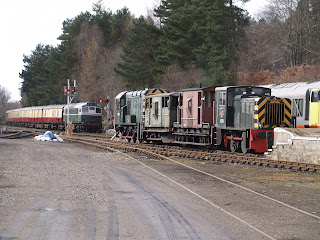 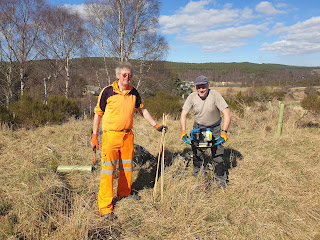 An extra day was squeezed in on an unseasonal beautiful warm sunny day - Saturday 26th March - location the bare scrubland that the Railway owns behind the P'Way Depot at Boat of Garten.
Lead by John Wood - who this year again purchased from his employer - Munros Nurseries on the Black Isle, roughly fifty bare root trees and again his generous employer also donated 50. John also bought bamboo stakes and cable ties and Mike managed to source plastic protective tubes. Above Martin and Kevin with John's petrol auger, which made planting so many possible. The only collateral damage was Kevin's t-shirt as he never noticed the exhaust had melted two holes, until it was too late!
The first public spring steam service train passes Broomhill bound. 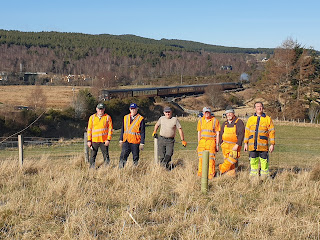 By the time the last train had passed all the trees were planted and we all were pretty knackered (although take note Georgie! John bought us all ice lollies and juice to keep us going) Maybe we should call the area Woody's Wood in years to come (addendum 01/04 or maybe Jubilee in honour of her Maj)

Many thanks to (left to right) John, David, Kevin, Martin, Ian & Michael. A fuller more informative report likely in a future "Express".... 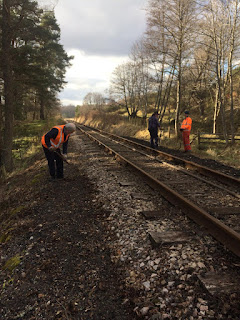 "Small squad today only David Bruce and myself. In morning loaded two trolley loads with shiny new screws also Pandrol clips and dropped off ready at base plates to be screwed and fitted into new sleepers. On returns loaded scrapped baseplates on to trolleys and returned to flatrol and back for more as trolley too heavy to push. After lunch did some packing under new sleepers then tidying ballast and cess as only photo shows" - David working, Georgie and Bruce chatting 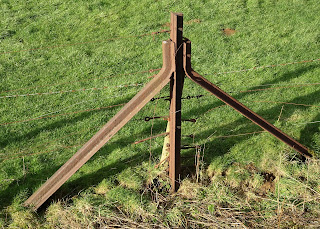 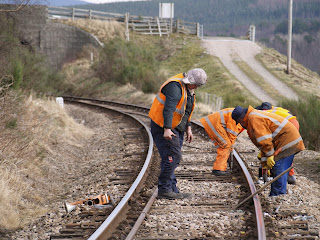 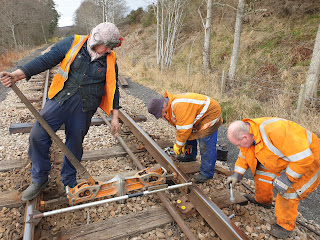 here the gauge was found to be unusually tight, so gentle precise persuasion by Georgie using back to back track jacks, Mike drilling and Angus readying the screws (Georgie did allow Angus to drill a few almost vertical holes) 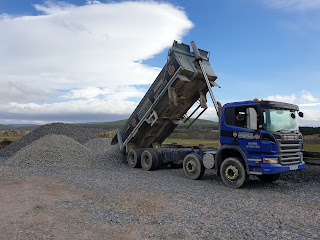 Meanwhile our virtual quarry is being re-stocked for future use along the line. 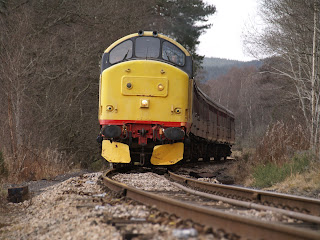 With a strong wind towards us we heard the horn of our new class 37 and test train coming from miles away, rather dull view from trackside approaching worksite 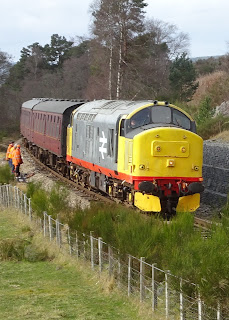 but Bruce had time to clamber up the farm track and catch it with a glimpse of sunshine (and some blokes standing around doing nothing as usual!) But overall we did achieve a good amount of work.
Thanks to Mike, Angus, Roddy, Bruce and Georgie.