As it was my better half's Birthday I could not make the PWay, however I still managed a trip to the Strathspey Railway and took her and a couple of friends to try out the new Dining Experience, in the form of Sunday Lunch on board the exclusive 1pm departure from Aviemore. 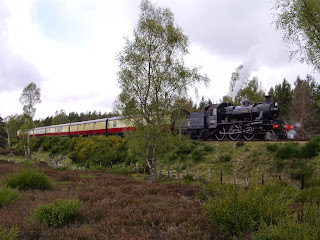 Pauses near "summit" of the line to admire the view 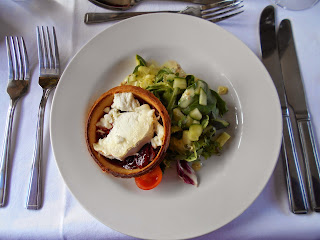 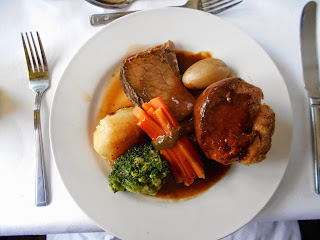 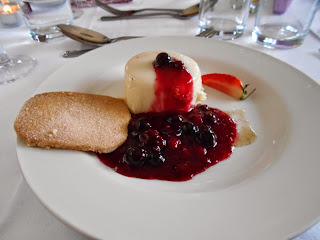 and of course Dessert, followed by Tea or Coffee, which I didn't imbibe in but had a Malt instead, on top of the reasonably priced bottle of wine meant the rest of my photos a bit blurry! 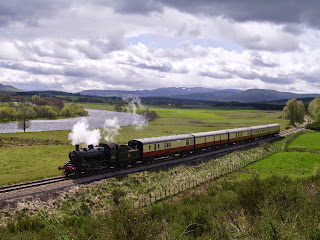 So I returned today, to take some external shots of the experience, above approaching Broomhill with the River Spey in the background. 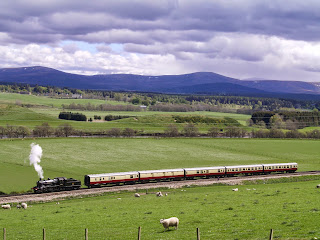 "Running Round" at Broomhill, just as well lamb is not on the menu! 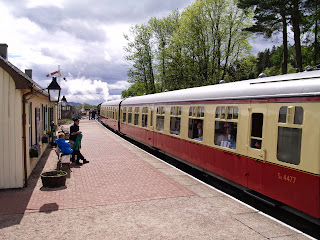 And, for those that wish, a look on the footplate or just stretch the legs a short break at Broomhill. 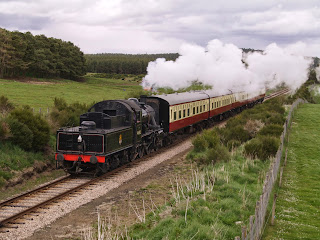 Before the return journey to Aviemore, a leisurely satisfying way to spend a Sunday afternoon, with good food. (Railway Volunteers get discount too!)
more details can found here - http://www.strathspeyrailway.co.uk/dining/ booking is essential.
﻿
﻿

With a large squad  much progress was anticipated, however it wasn't to be. 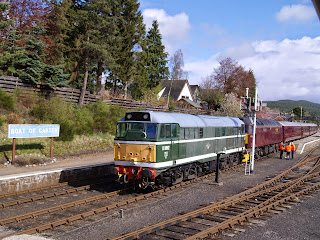 The Royal Scotsman awaiting the arrival of first Steam service from Aviemore, now crewed and hauled by Strathspey Railway resources to Aviemore. 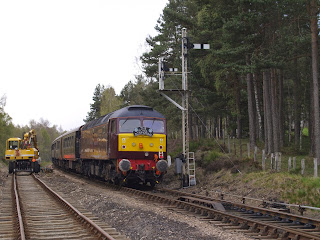 With another surprise Class 47 at the rear, apparently acting as a stabling brake as the previous day a fault occurred with a hydraulic handbrake necessitating the removal of the offending vehicle, between Perth and Dundee, I think. 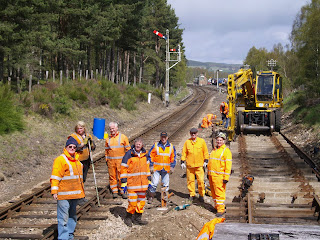 Anyway back to the P'Way, we replaced a number of wooden sleepers towards the just in shot Buffer End, with the intension of lifting the final pair of rails in, drilling holes at the cut railends so they could be fishplated up, job done. Wishful thinking! After many years of trouble free service the Rail Drill broke (still being investigated) and the not so reliable 360 Road-Rail Machine played up again and unable to lift rails! 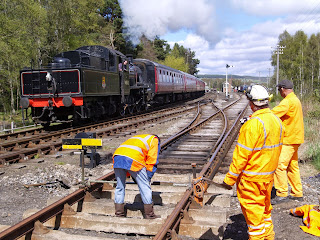 So a start was made on packing and levelling the Headshunt towards the buffers.
﻿
﻿ 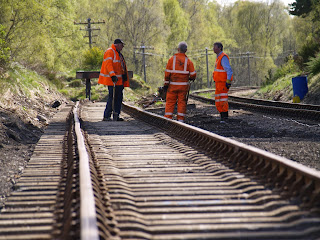 Good progress was made with this by the end of the day and all that remains is tidying up the Cess and "10 foot" area between Mainline and Headshunt and of course filling that elusive gap!.........
Posted by Neil at 19:04 No comments:

Visitors to Speyside Signal Cabin will notice the addition of three S&T cabinets at the foot of the steps. They may be ‘new’ to Aviemore Speyside but they actually date from the 1950’s and were recovered from Perth Yard a number of years ago. They are therefore just as much part of the 1950’s railway scene as our Class 2 Ivatt 46512 and the BR Mk1 Coaches 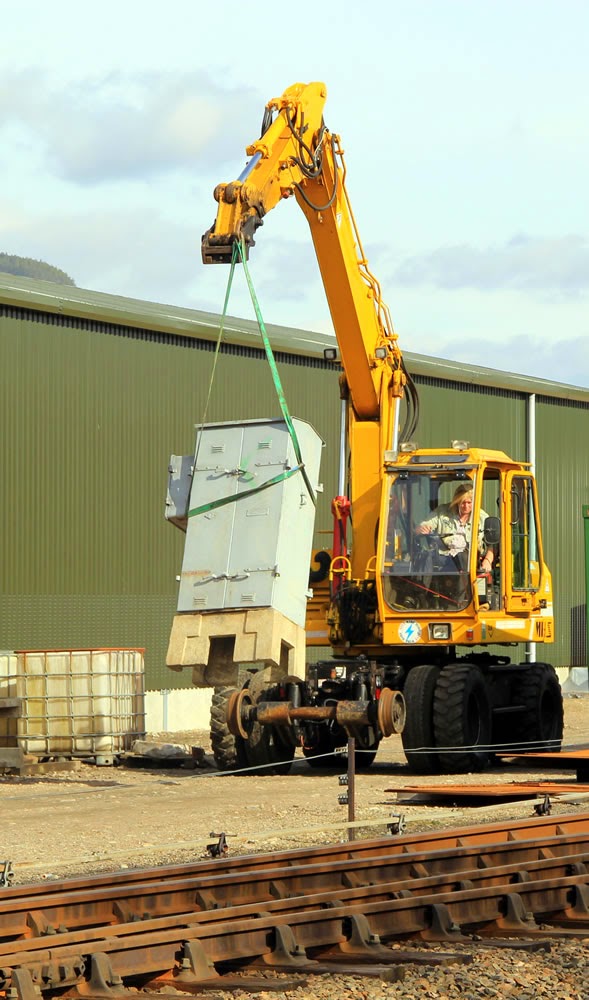 The work started in earnest in early March with the usual precursor to most S&T work – digging holes!  Cable ducts had also to be diverted to pass through the bases of the new cabinets. The original plan had been to install two cabinets, one for signal lighting / signal box circuits associated with the Key Token instruments and one for the associated batteries. However on checking the length of the previously installed power feeder cable from the Roy Hamilton Carriage Shed it was realised that the power case would need to be further away from the signal box than was originally intended in the S&T Plan. This problem was solved by installing the third cabinet, which although not needed now, can be regarded as advance works for the eventual re-instatement on the Speyside Passing Loop. The power cabinet is the one with the “oven” on the side to house the 230/110V transformer. 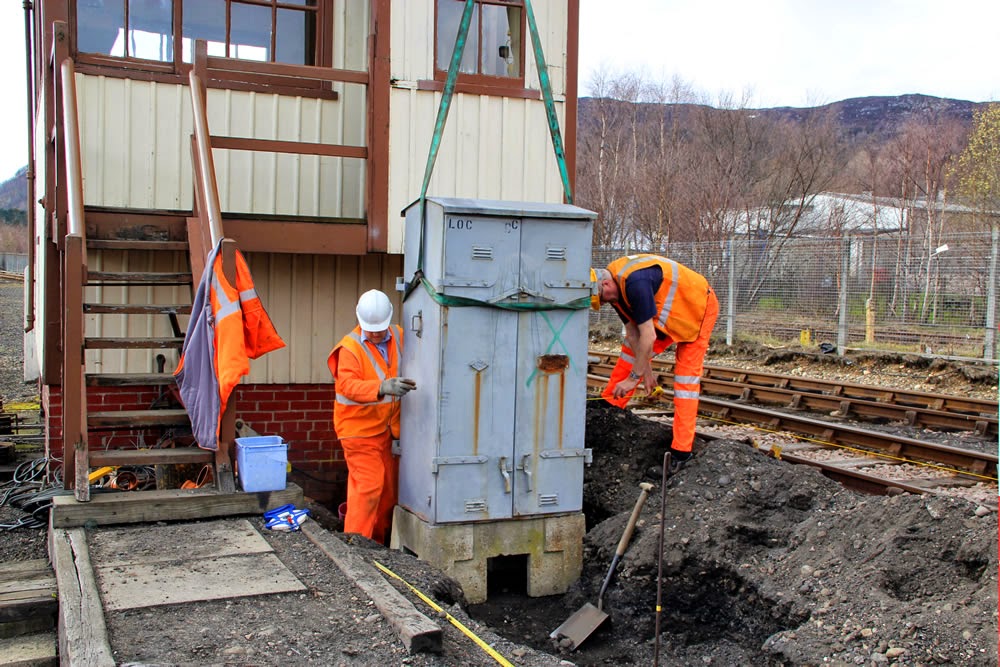 While the ground preparation was underway a trip to Boat with the Association Ivor Williams Trailer rescued another cabinet using the JCB for the lifting operation. Back in Aviemore, once the ground preparation had been done the cases were lifted into place using the O&K 360 machine. As usual with any civil engineering work there was a degree of “adjustments on site” to get the cases to “line and level”……P-way jacks have many uses! 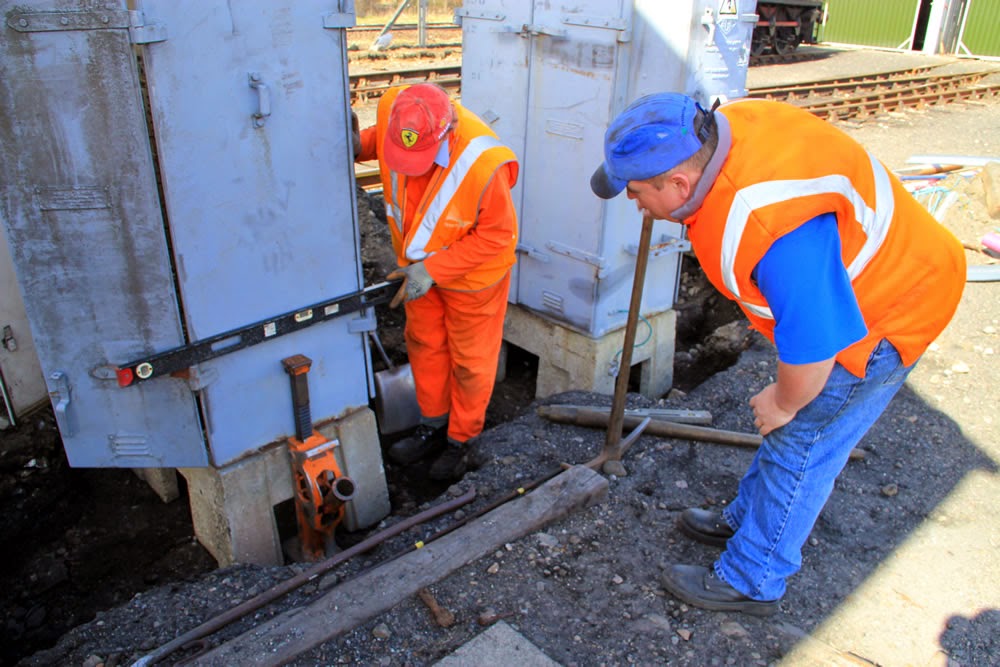 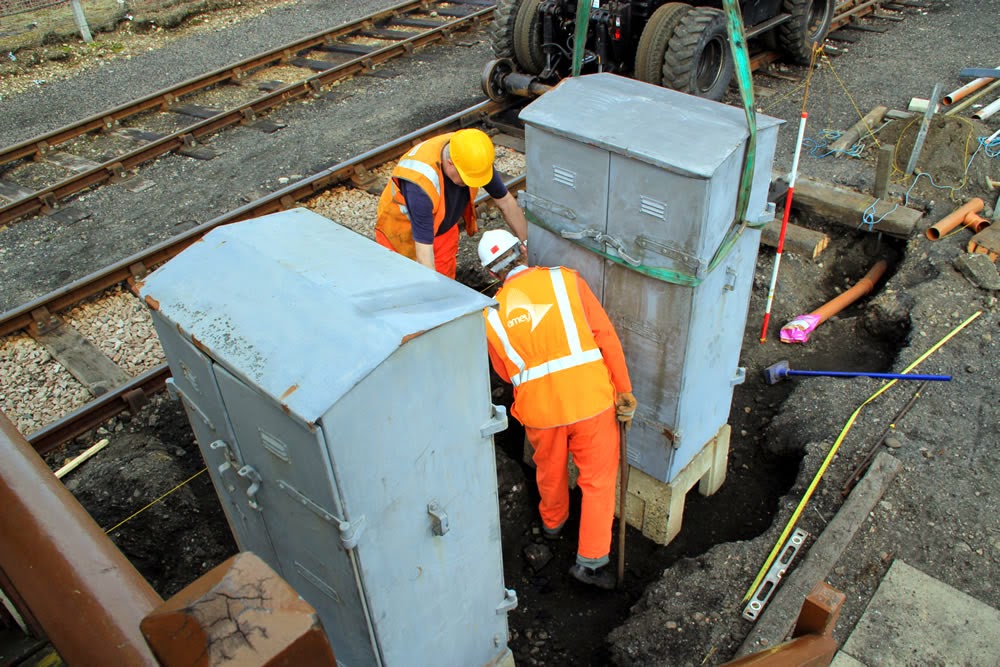 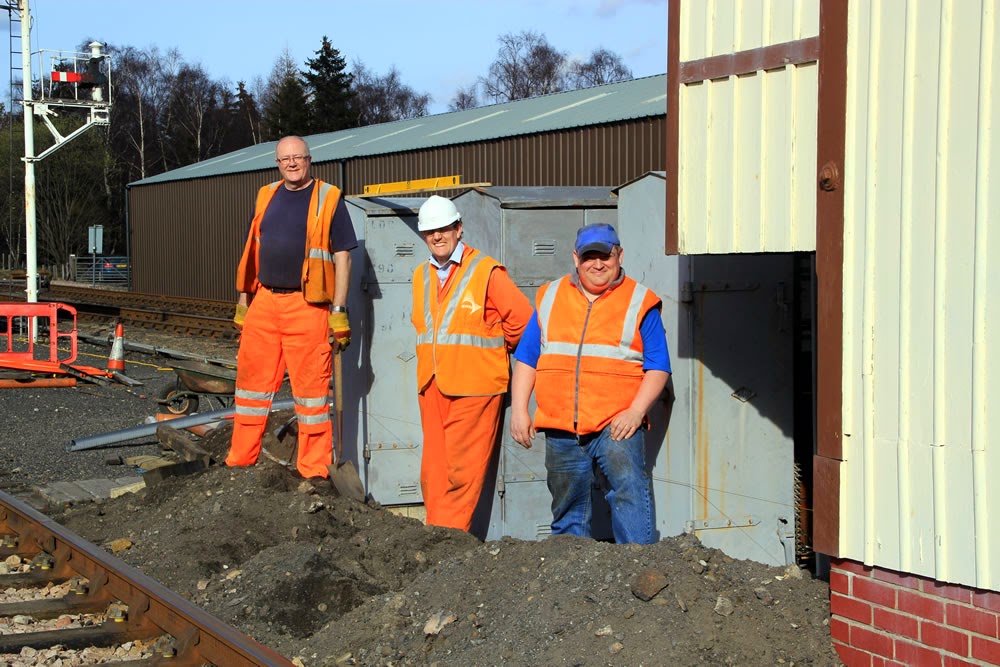 Volunteers and staff who contributed to this endeavor were : - D. Dow, S. Muirhead, G Ritchie (above) G. Sutherland with G. McNair and S. Vaughan as machine operators.

Thanks to Graham Sutherland for photos and Stephen Muirhead for the words. 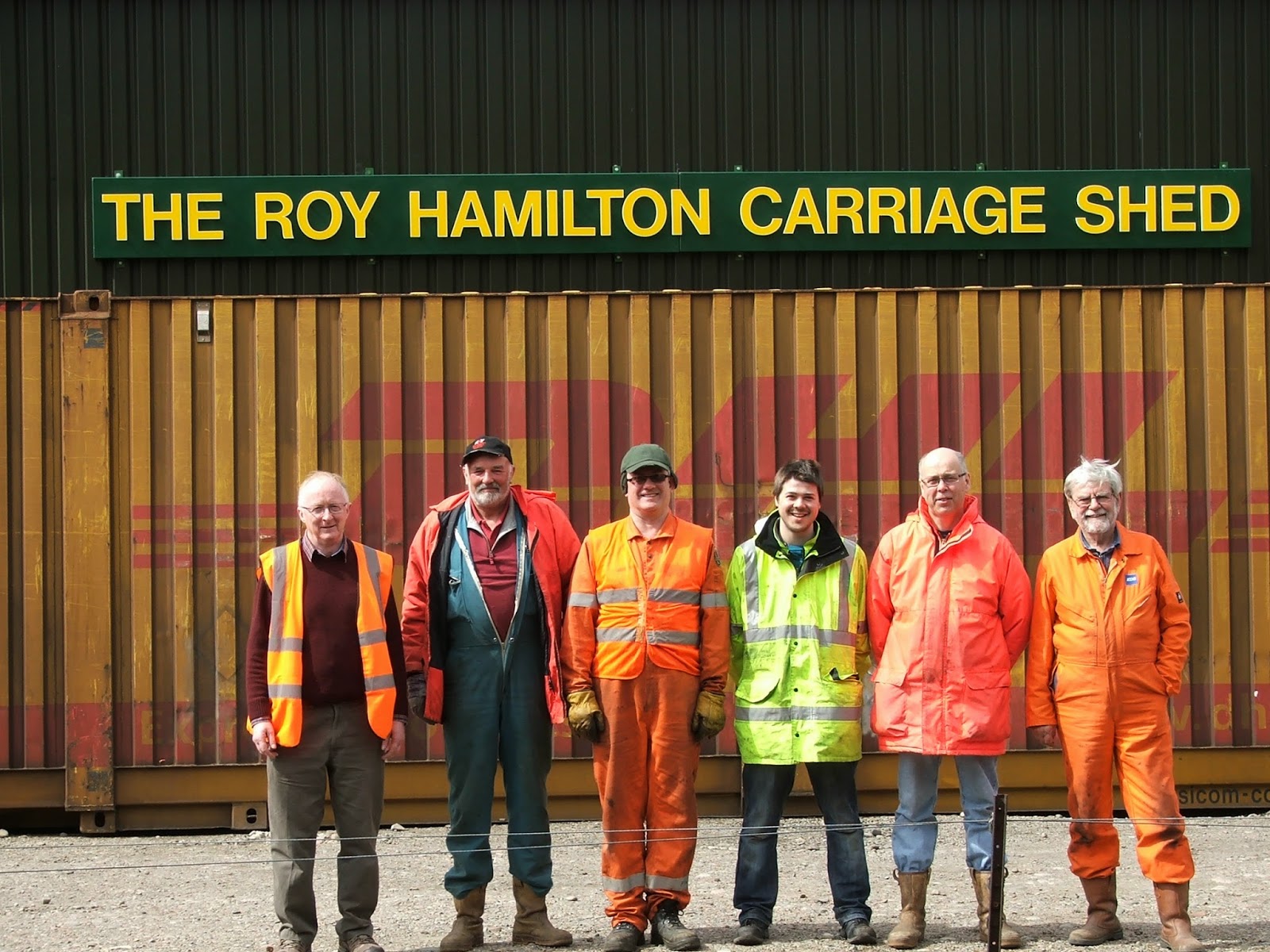 Peter Mander, Jim Hardy, Jim Pittendrigh, Dan Courtier, Nick Courtier and Colin Frost, erected the sign on the carriage shed funded by a legacy from the estate of the late Roy Hamilton http://www.scotsman.com/news/obituaries/roy-hamilton-1-497399 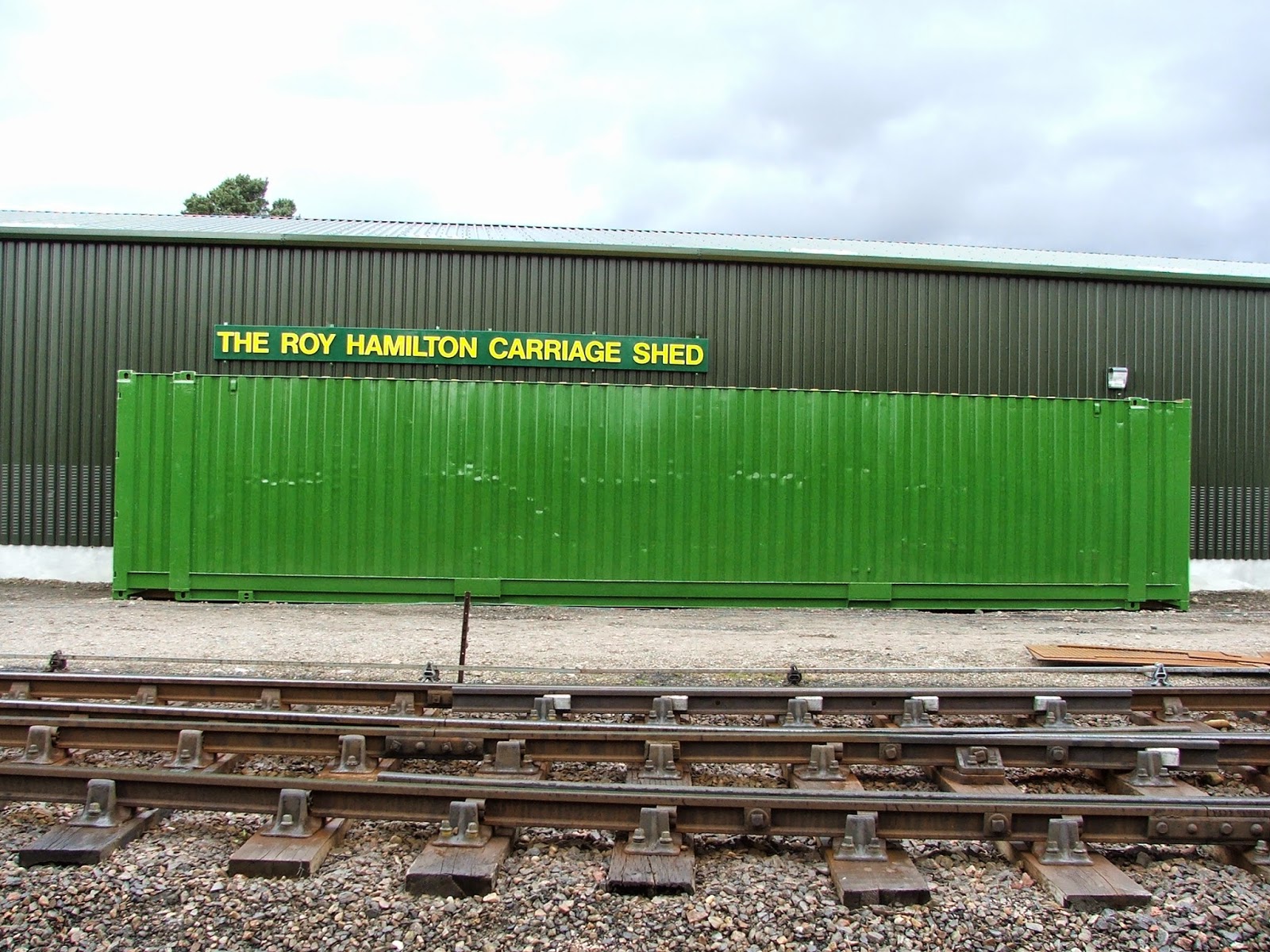 The group also painted the sea container which is to be a store for the Carriage & Wagon Department and will be placed a bit further north, alongside the carriage shed wall and away from the sign. The two green containers, currently alongside the track are also to be moved to against the wall of the carriage shed. Thanks to Colin Frost for info and photos.
﻿
Posted by Neil at 14:58 No comments:

A good sized squad was required to lay the rails and the Volunteers didn't disappoint. 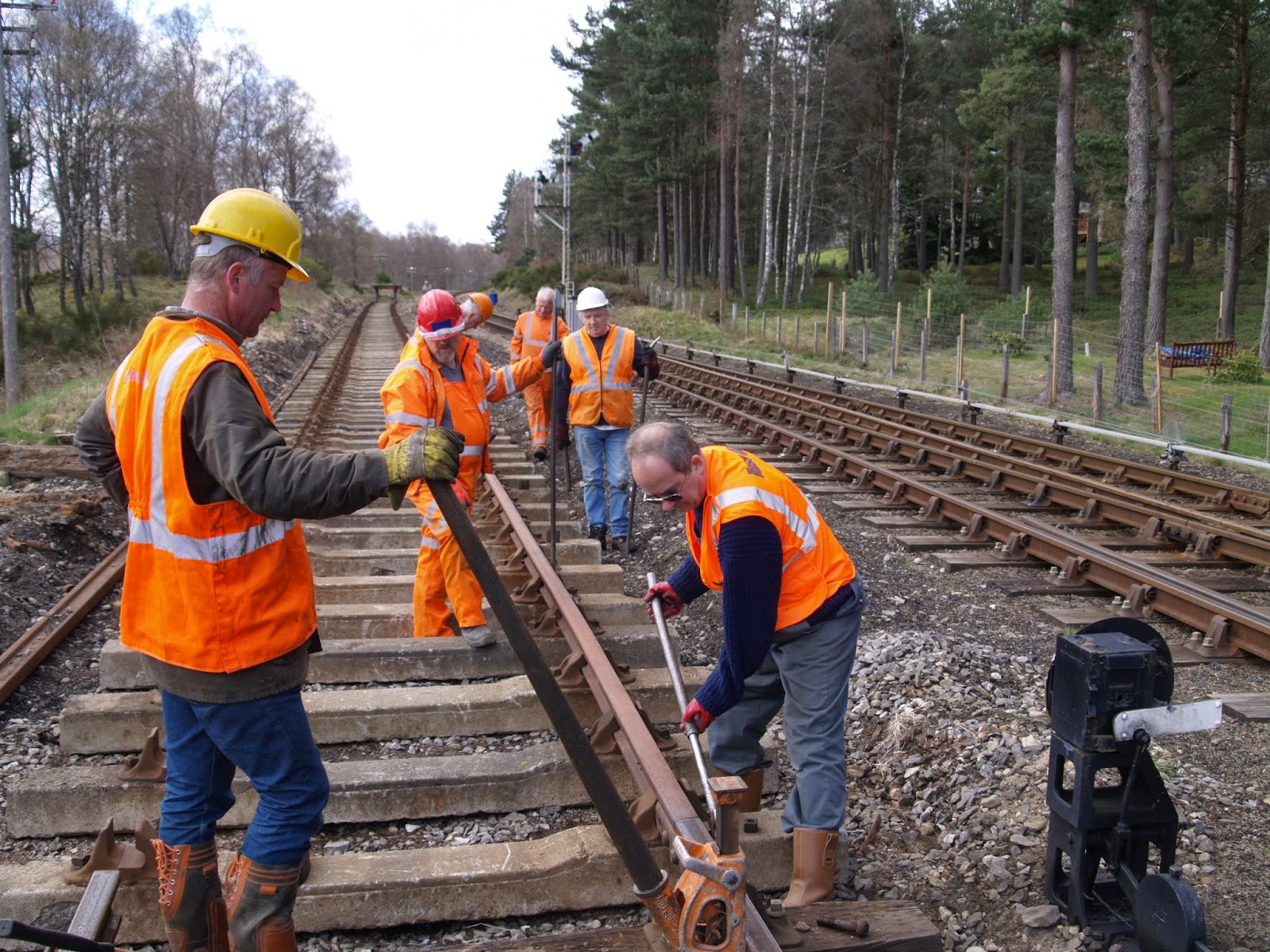 ﻿
After turning the first rail 180 degrees, we got into the swing of things, fishplating one end once the gap was correct, then keying up :- required one to lift the sleeper with a bar, one to position rail in chair also with a bar and one to hit key into the chair with a keying hammer. 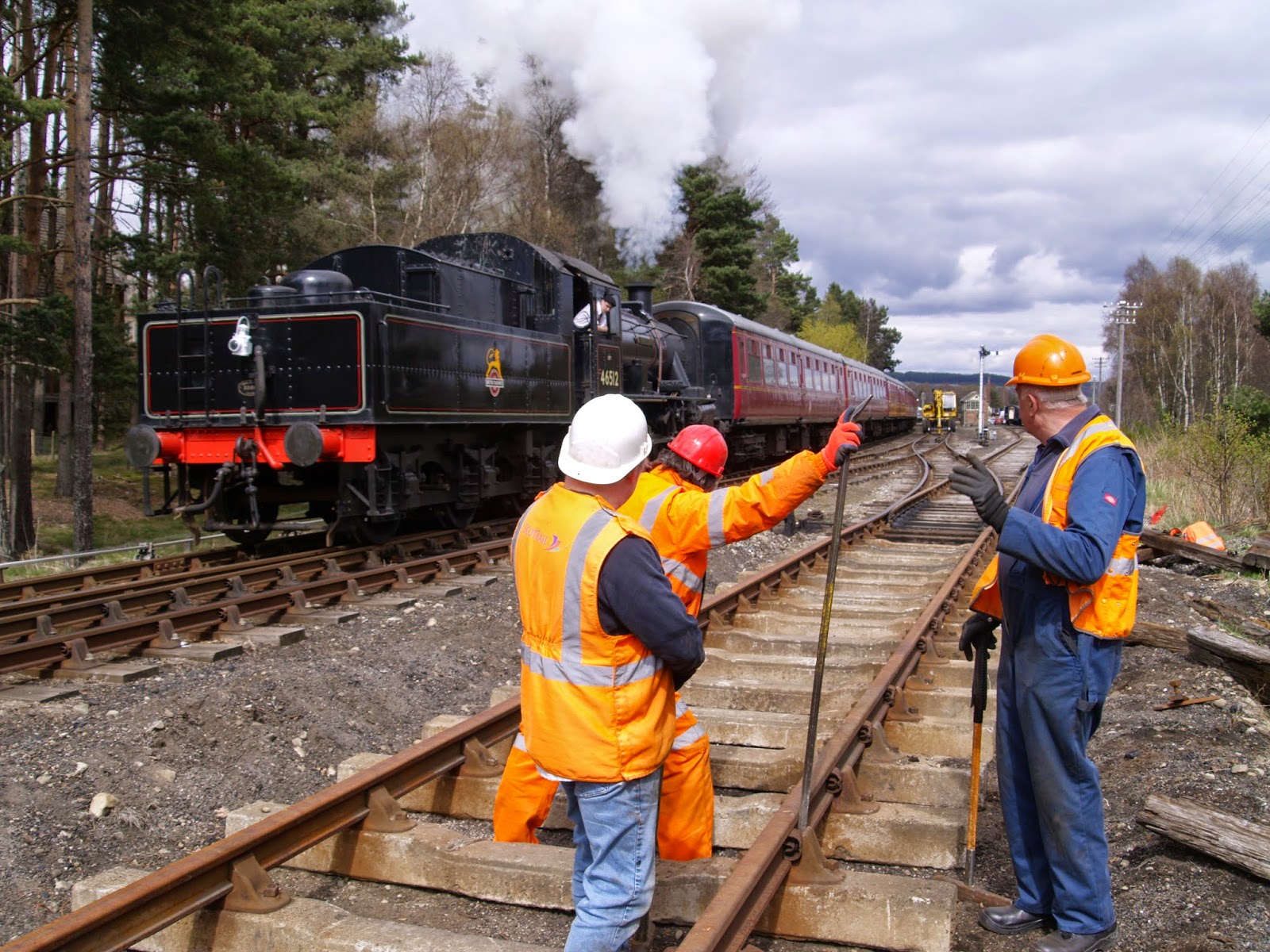 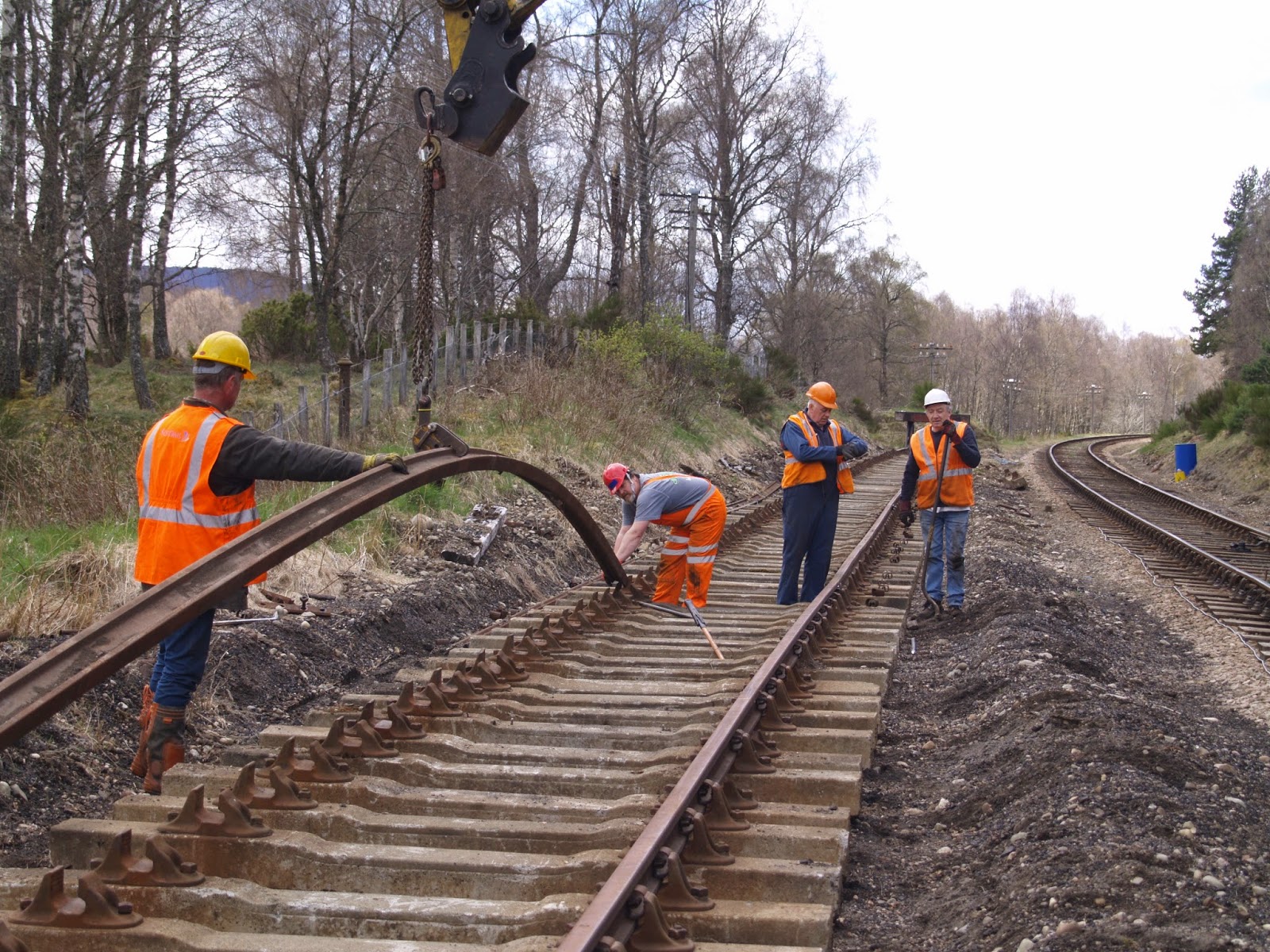 But Jim as always has his eye on his Tea-Time watch!
The 360 Machine gingerly lowering rail into position here. 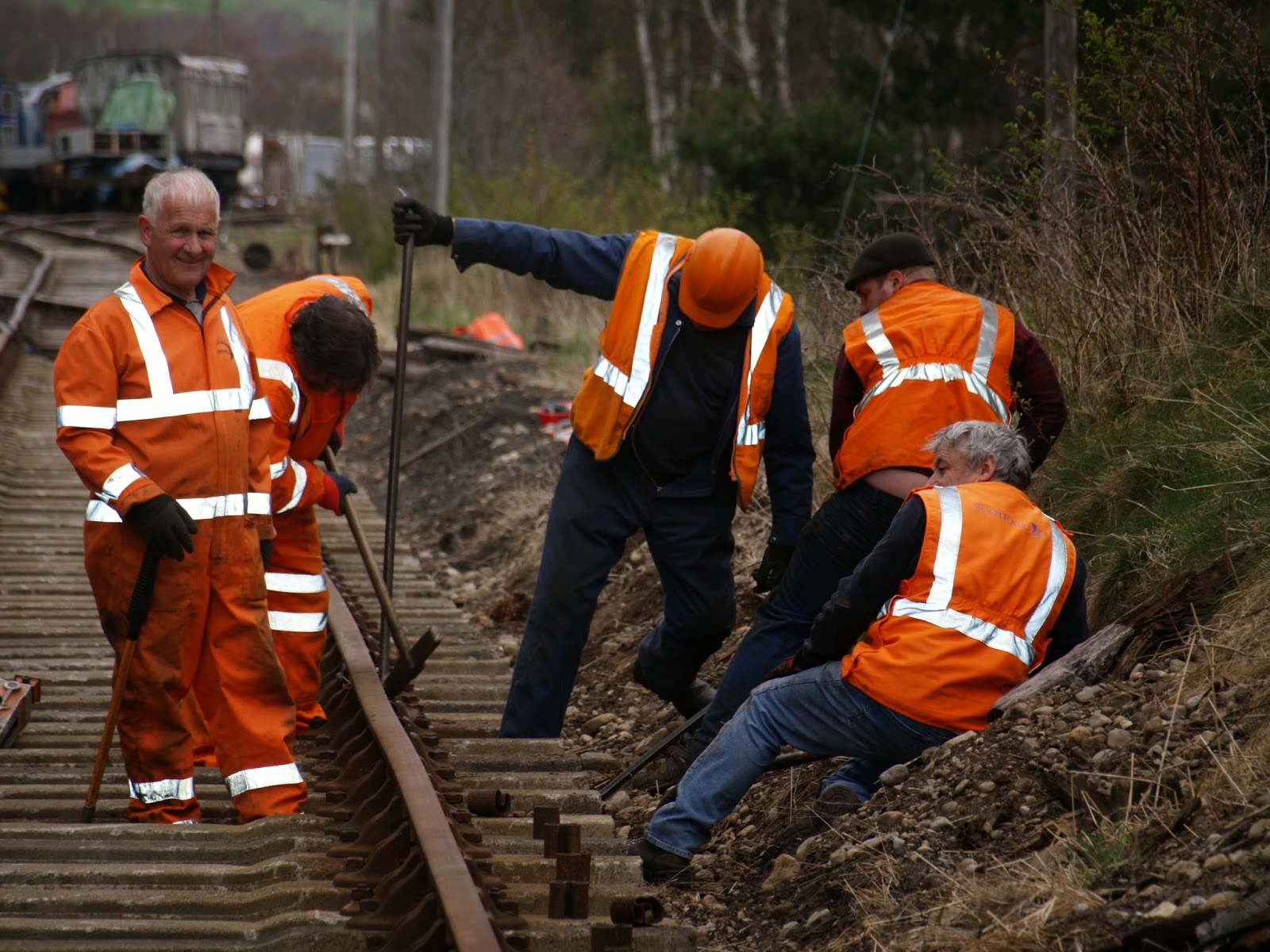 A rare action shot! but keying up really did take a lot of time and energy. 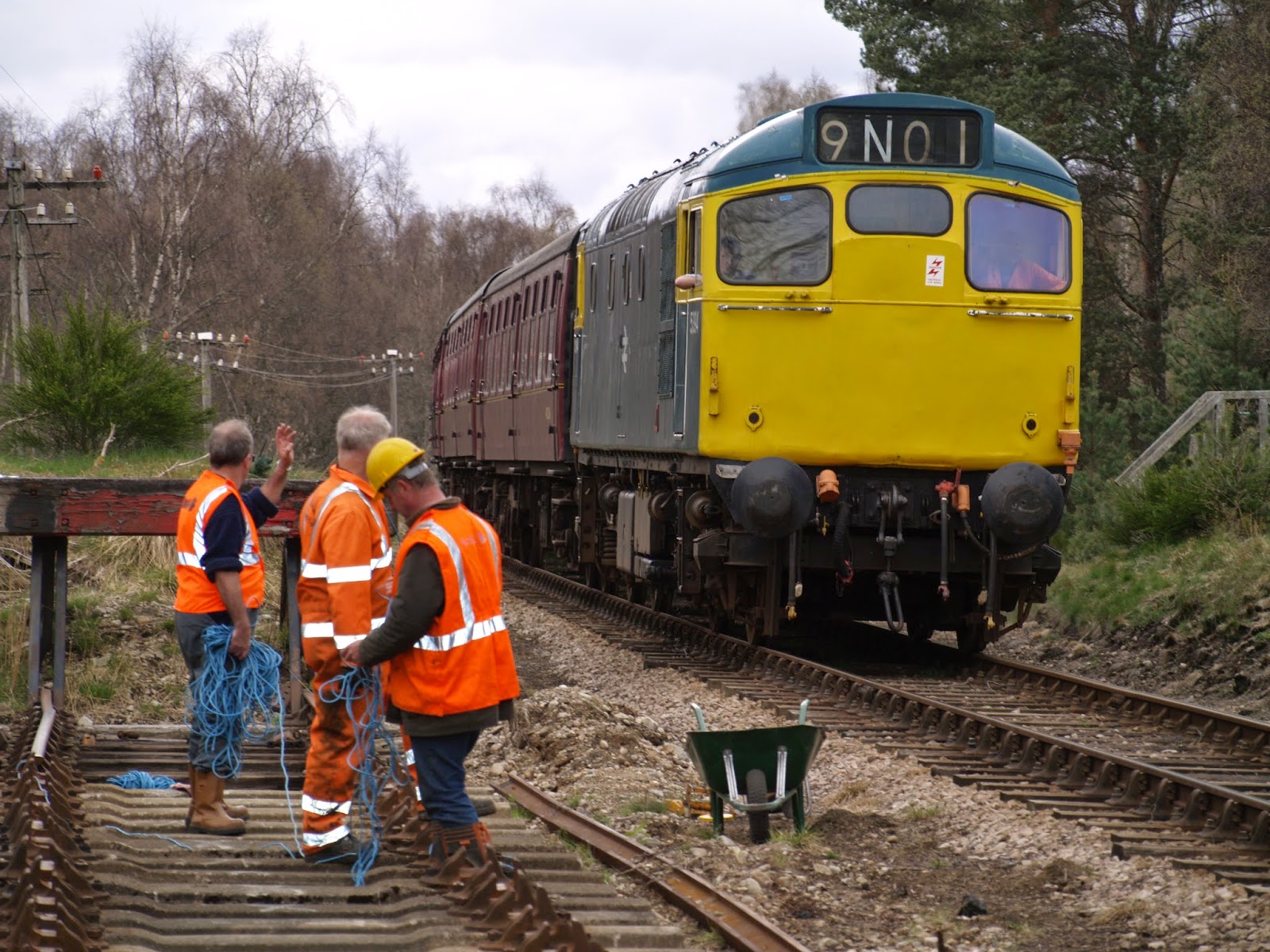 Meanwhile Fergus and Roger did a grand job "un-fangling" the rope.
We were waiting and waiting for the 2.45 from Aviemore to let us in, to cut and lay the final of the 6 pairs of rails, when it finally arrived. PS. Not sure why it was Diesel hauled as I had to go to work.
﻿
Posted by Neil at 12:14 No comments: