The unseasonably mild January weather meant that trackwork could continue. 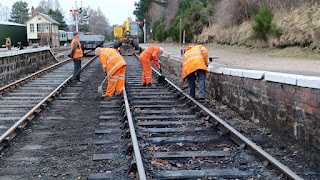 First job of the day was to re-slew a length of track at the South end of platform 1 in Boat of Garten. Both sleeper ends were dug out, the platform end loosely filled with new ballast and the track slewed using jacks. The ballast was then tamped to avoid the track springing back. The jacks were removed, ballast tamped again and the length tidied.

After lunch the worksite moved to the North end of the platform for some Measured Shovel Packing (MSP), measurements taken using the sighting boards (alas no photos) 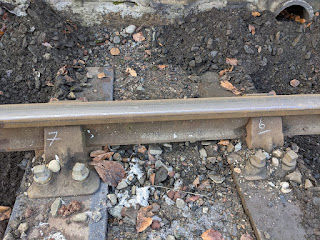 and marked on the chairs in chalk, cross levelled to other rail, then each alternate "bed" between the sleepers dug out to the bottom of the sleeper approximately 18 inches either side of rail. 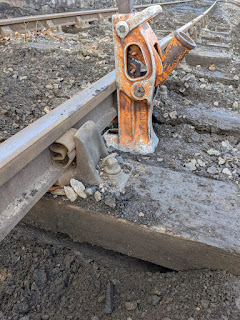 Track then jacked up, leaving a sufficient gap under the sleeper 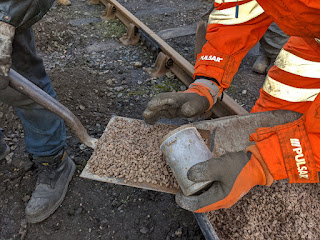 then the prescribed number of canisters, full of small "chippies" are measured out onto a special shovel, 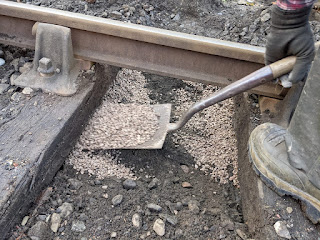 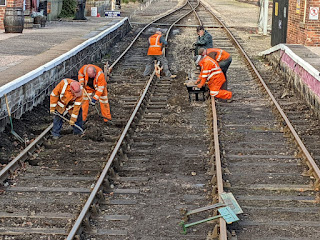 Then drop jack and onto next bed to repeat, once complete just a case of filling in the beds with ballast and tidy up, hopefully concluding the Station trackwork at Boat of Garten for the time being.
Thanks to Mike, Angus, Kevin and especially Ian & John who supplied info/photos and Fergus as he loves MSP so much!

On Thursday 13th our friends from Scottish Woodlands felled three trees that were causing concern to our neighbours at Boat of Garten. 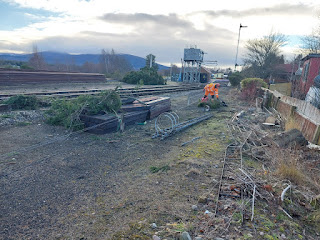 Sleepers were used to protect the signal wires and signal ladders lying around. The whole felled trees were swiftly removed from the line by our Road Rail Vehicle (RRV) to level ground near the water tower and I suspect Georgie spent some time tidying the track shoulders to the North Signalbox by hand. 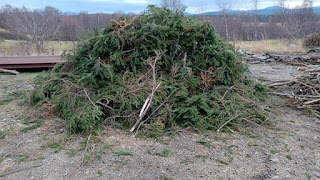 On Saturday Ian and Kevin using chainsaws reduced it all to brash, kindles 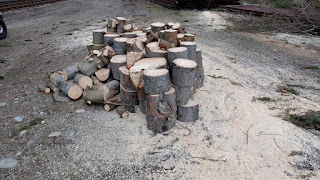 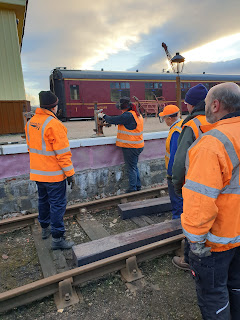 Meanwhile Georgie showed some of the newer members of the Gang, the intricacies of using the rail jacks. 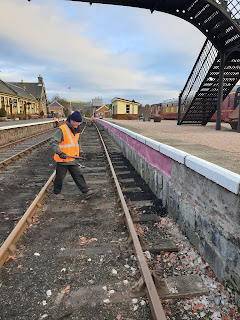 Thereafter the squad was large enough to split in two - Peter, above re-distributing "ballast", tidying and filling in the ten remaining sleepers 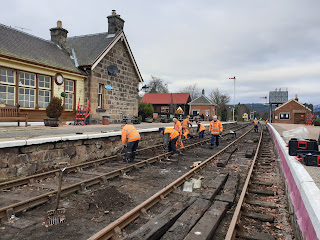 that the other squad changed swiftly by mid afternoon. 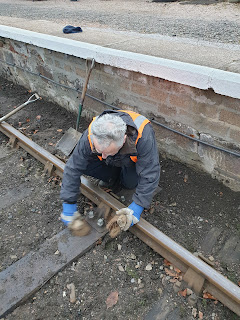 Andrew wasn't content with just the handle coming off his brush, in his efforts to fix it, he inadvertently split the head in two! Undeterred he continued removing dirt from the chairs for a short while, until his knees gave in.
Thanks to Georgie, Mike, Angus, Martin, Bob, Peter, Iain, David, Andrew, Ian, Kevin and Scottish Woodlands
--------------------------------------
Andrew redeemed himself by attending again today - Tuesday 18th January, joined by myself, Roddy and Sam all the way from Inverurie. 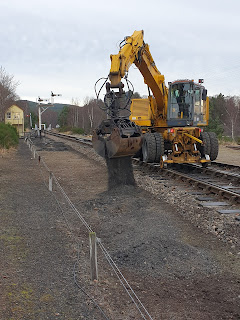 We were grateful of not having to hand shovel the locomotive ash out of the two wagons that Georgie had tripped from the Aviemore Engine Shed, on account of the clamshell bucket on our RRV. 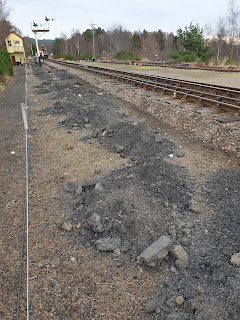 However the huge lumps of strong dense concrete mixed in amongst it were not at all welcome! 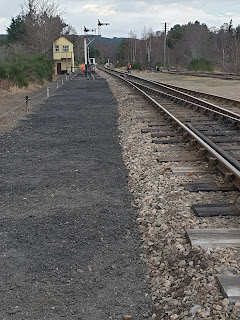 Slowing us considerably, we did manage to create a reasonable Down Cess by the time we were knackered and it was getting dark, maybe the Engine Shed staff should sieve their " locomotive ash" with a kitchen sieve next time!
As ever thanks to all that attended.

To start New Year off - 2nd of January - Ian and John assisted Georgie in a surprise P'Way day. John reports and photos - 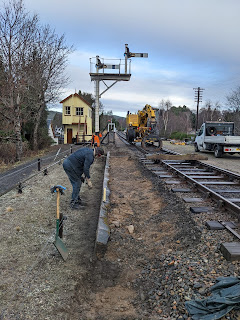 "Trench dug, 16 condemned concrete sleepers laid out on their side to provide a small retaining wall to provide a ballast shoulder and a better grip, line/ballast keeps tramping towards signalling equipment. 180 feet of excess ballast re-purposed and laid to provide 50% of the new shoulder. 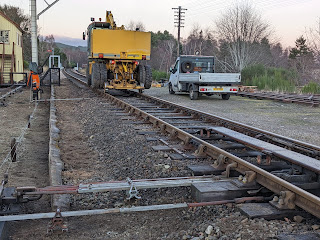 A lot of digging was done by hand, Ian and John both knackered by mid afternoon." 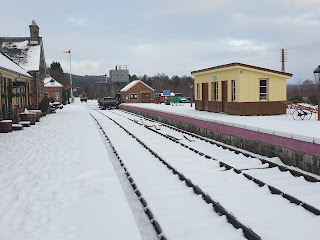 Three days later our mid-week P'Way was cancelled due to the white stuff above, our Stone Mason has not be able to progress for the same reason, the pink sheeting is a weather proof membrane.

Myself (above) Mike and Roddy had forewarned the Carriage & Wagon Department that their warm shed was now our destination. The set task was to heavy clean the interior of the above coach, we finished quickly enough to also externally clean the newly installed double glazed large windows (now spotless). Mike also managed to re-screw down the anti slip strips on Aviemore Station Level Crossing. We may well be back if the weather doesn't behave.
Saturday the 8th saw a good sized squad rendezvous at Boat of Garten and due to the likely seasonal weather Georgie had already organised a short P'Way train - 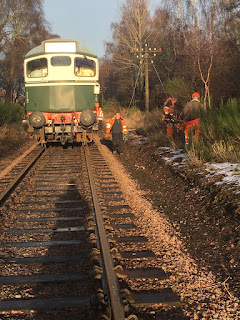 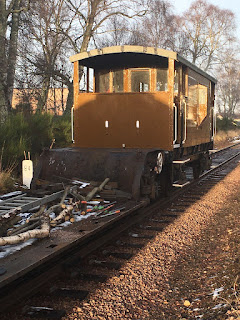 a "Flatrol" wagon with a vast array of power tools courtesy of John & Ian and the recently refurbished LMS Brake Van, which by all accounts now has a super almost self lighting coal stove that blasts heat! 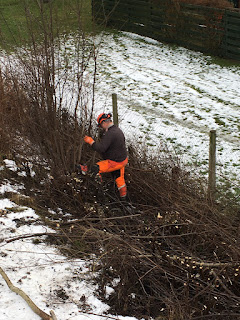 Mike  reports and photos - "we did a bit of trimming at Boat of Garten near the water crane then off to Dalfaber, across the crossing up to Spey Lodge and cleared below the telegraph wires except for some overhanging branches from neighbours trees at Dalnaby which were left to maybe get their consent. 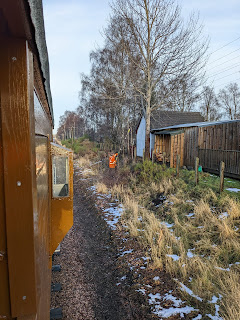 Then after a late lunch we set off to mp 85 & did more as far as the estate crossing ..the chainsaws of all types were great   ..branches were left to be taken up by the Road Rail Vehicle grab & chipped ..weather fine, still light until 1615 so a longer day than of late."
Thanks to Mike, Martin, Ian, John, David, Kevin and Georgie who all worked very hard.
Posted by Neil at 09:19 No comments: