Good sized squad assembled at Aviemore in perfect working weather, the task will continue to be Switches and Crossings (S&C) timber renewals, for some time I guess, as Georgie mentioned that to get the best deal, quantity mattered, so an artic lorry load was dispatched from Boston (Lincolnshire presumably but the white pine came from Germany!) 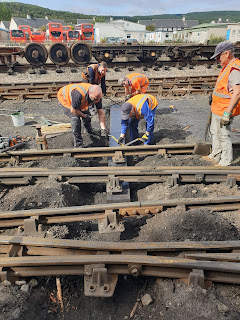 Kevin supervises after doing a good bit of the digging, as a four man lift required to get new timber maneuvered into place, incidentally four rail jacks were also required to lift the considerable weight of the track at this location. 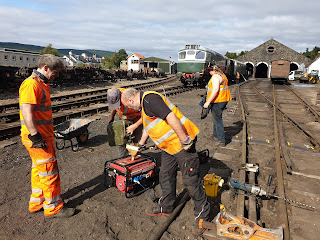 Just visible behind Georgie is the tiny battery drill that had successfully drilled all the holes until mid-afternoon, when both our batteries gave up and the more conventional equipment was draughted in from the Sheds.
Thanks to all that attended, especially Sam who had a reoccurrence of an old injury necessitating him to go all the way home again mid morning. Alasdair and possibly Bob were up for more PWay work on the Sunday
Posted by Neil at 10:38 No comments: