Just North of Milton No 1 Crossing - below, 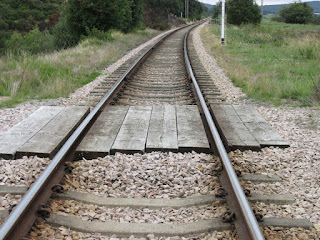 numerous strange construction vehicles are visible from the train. This is the start of duct drilling below the track for undergrounded high voltage cables from Tom Nan Clach Windfarm some distance further North on Cawdor Estate land. 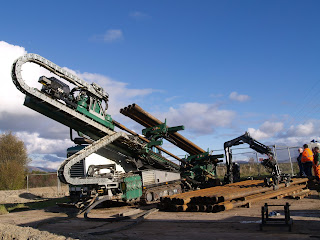 The Developer agreed a wayleave with Strathspey Railway Co. starting in early 2017 and since then there have been many documents to review and approve including pre-start rail head surveys.Track walkers will have noted survey marks on the sleepers in the vicinity used by an independent surveyor in monitoring the rail head level to record if any settlement occurs. 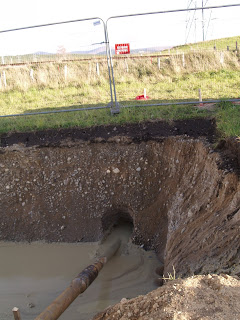 First of four ducts to be drilled (above) from just outside our fence which head steeply down so as to be approximately 6 metres below the track. The ducts then carry on deeper and run below the the River Spey to emerge north of their destination at the Sub Station on the Nethybridge Road. The Cairngorm National Park Authority (CNPA) dictated these cables had to go underground.We are advised that existing overhead HV wires in the vicinity (just visible top right) are likely to be undergrounded to satisfy CNPA requirements. We look forward to more income but not to the paper trail that will be part of it! 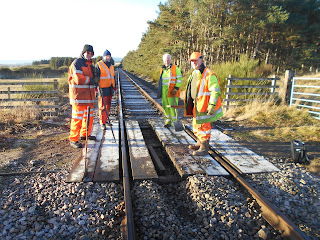 Of a similar nature to this work, a considerable length of pipe is being laid in the "four foot" (between the running rails) for testing purposes, necessitating the removal of one of the wooden planks of a number of level crossings, above today's squad (left to right - Martin, Roddy, Mike & Roger) admire their handy work at Croftnahaven No 1. 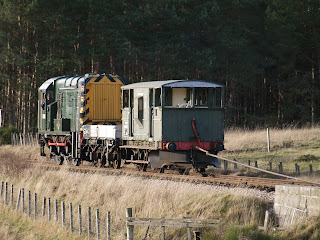 ﻿
And the way the pipe is got there! - notice no tail lamp on "Shark" Brake Van as train not quite complete! 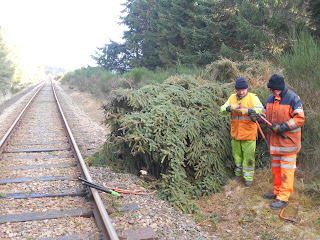 A bit further up the line a large "Christmas tree" had been blown over in recent gales and we were detailed to cut it back further, to clear the cess (it had previously completely blocked the line) 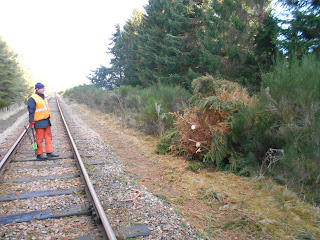 After considerable huffing and puffing - job done.
Thanks to all that assisted today and Mike for most of the info and I would like to wish everyone a Merry Christmas and look forward to keeping you updated in 2019.

And from our Signalling & Telecoms (S&T) colleagues -


To accommodate the correct signal arm bracketry and also through routes for cables entering the post and running underground in ductwork, the signal as repurposed at Aviemore (South), required accurate marking and drilling of the original signal post (measure 3 times and do it once – although drill bits were easily blunted by the hard steel post).  The signal features volt-free electrical contacts as tellback to NR systems.
Stephen burns the midnight oil (below) early last week. 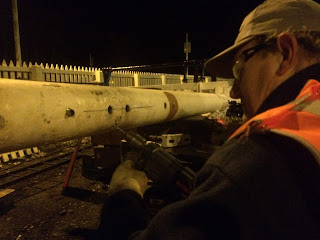 Friday the 14th December saw the installation of a new signal in Aviemore Station which will manage the interface between the new Network Rail Signalling controlled from Inverness and Strathspey Railway managed Infrastructure in Platform 3. 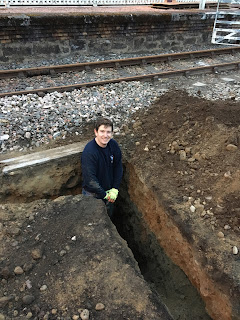 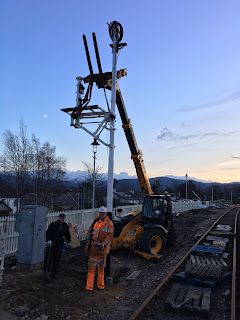 The S&T installation team were ably assisted by Nathan Lightowler and the Telehandler machine from Aviemore Shed. 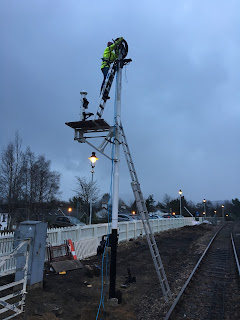 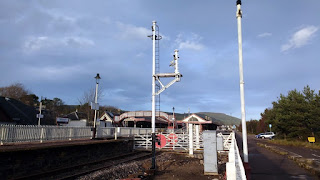 Thanks to Stephen Muirhead and Colin Stirling for this rare S&T update.
.

On Wednesday a midweek squad of Andrew, Martin, Roger & Mike headed to Boat of Garten, expecting to be out on the track towards Broomhill, to be helping with the Raptor oil pipe laying (more info in a future Blog) or preparing the farm crossings for them.
The pipes were delayed until Friday so it was a retasking job which was coped with easily. 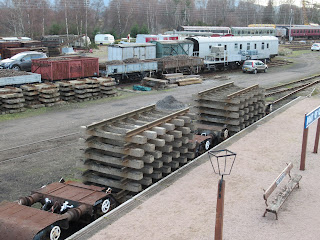 Some of the track panels had been off loaded earlier by the Raptor oil Hiab lorry so we started un clipping until the lorry driver returned ..& succeeded on those accessible 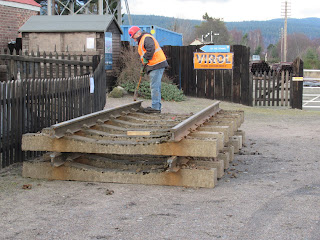 Andrew knocking out Pandrol clips above 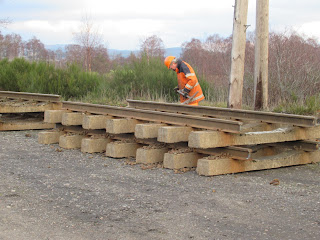 and likewise Martin but with a backstroke 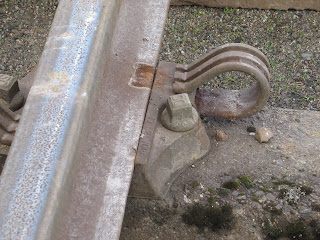 ﻿..the Mills clips proved troublesome but with a few grunts came out. 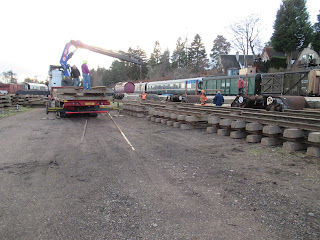 Then the bulk of the other panels were offloaded & this would have been finished had a hydraulic hose not failed. A wagon cleared of panels was taken to Broomhill in readiness for the pipes arrival. 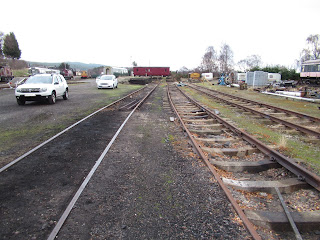 Also above the site of the Boat storage shed ( Project Undercover ) is cleared of rolling stock & once the loading bank is taken away it's foundations will be progressed.
Thanks again to Mike Tough for all info/photos 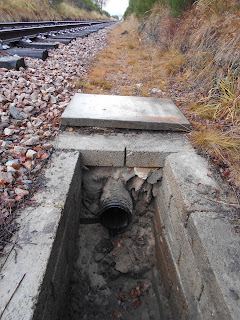 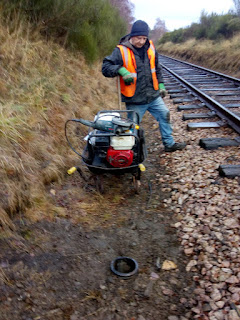 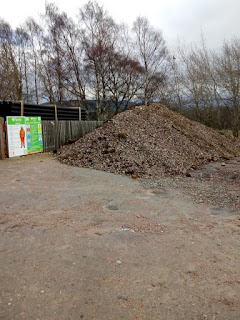 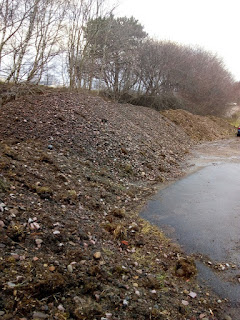