Week past Saturday saw Angus, Bart, Sam, David, Fergus, Justin, Michael (who mysteriously vanished), Mike Tough at least had the excuse of a Board meeting to attend 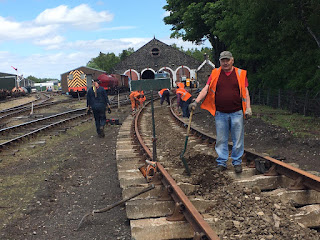 and above Reg Stanley who was a regular with us until moving to North Wales (on "holiday" I guess, he did more days volunteering installing rodding & hand point lever with Georgie and left an unexpected but very welcome donation to the PWay fund) Much lifting and packing with inferior "ballast" that was discarded from Network Rail Aviemore upgrade a few years ago now, but perfect for our needs. 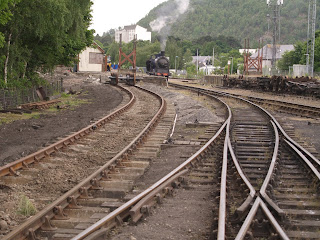 This was the intended worksite yesterday - finish off new siding for time being, more slewing and levelling ballast but alas Georgie had more pressing matters to attend. Note the wilting weeds as our weedkiller train ran the entire length of line midweek recently (no photo yet of complete switch and hand points, as rail vehicles parked atop already!)

Plan B was continuation of fishplate oiling. 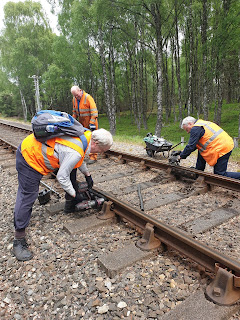 David here our most recent recruit with impact wrench competes with Andrew on speed! Angus having just caught up with our supply wheelbarrow, but the commendable winners always were Bart and Sam, whom have youth on their side and worked very well together. 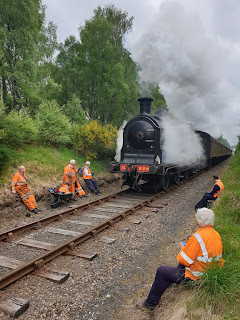 Our extended breaks were obtained about train times and we did from Dalfaber Level Crossing to Estate Foot Crossing about a mile and a quarter (only 3 more to go!) but it was a long tired walk back to Aviemore for all of us. 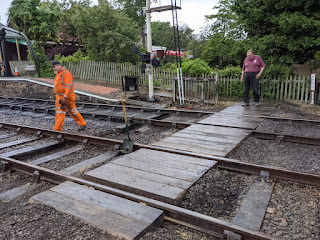 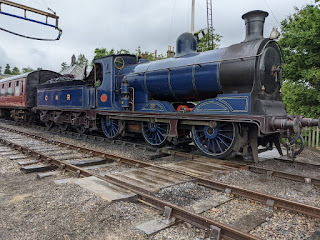 Fishplate oiling has started at Aviemore and the aim is to get to Boat of Garten over the Summer, now that we are on the Mainline it's every second joint, which in practice means we do the joints with the OUTSIDE NUTS (which we are!) 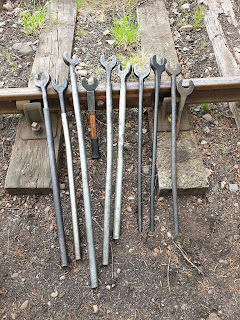 All we need are the willing participants, no doubt I will risk my camera getting the horrible fishplate lube on it whilst actually carrying out this task which has been neglected for sometime.

Now that Georgie is back she wants to crack on with the new works at Aviemore Shed, so that the resultant siding space can be used, to that end Saturday saw 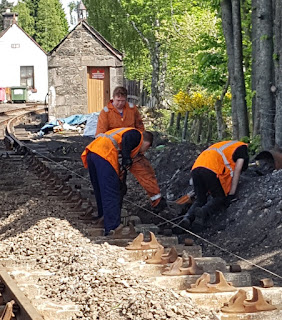 Bart, Justin and Sam start trying to line up the concrete sleepers with the ubiquitous bit of string, so that the rails can be more easily dropped into the jaws of the chairs, 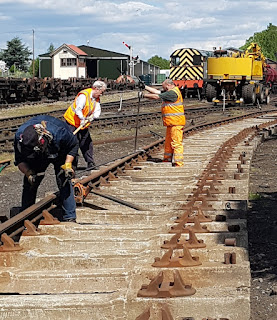 then its a matter of keying up, Iain prizing slightly open the jaw of chair with a bar whilst David, gets into the swing of things on his first day with the PWay (hopefully not his last!) with the keying hammer. Fishplated up, then the hard graft started - slewing and more slewing to satisfy Georgie's eye and then packing ballast under it all, just as this was completed -
"Ian and John showed up, swearing blind they had been replacing barriers on bridges - but I have to say they were spotless and I suspect they had been picknicking in the shade for most of the day!"
Thanks to Bart, Iain, Sam, Justin, David and the anonymous contributor of photos/text (and grafter!)
-----------------------------------------

Over quite a number of Saturdays John Wood and Ian Stanworth have actually been quietly erecting and fixing hand railings to our underbridges as per the 2019 Inspection diktat of the Office of Rail and Road. 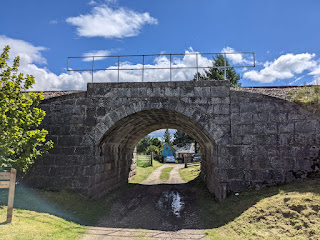 Above is the example at Milton, which was started last year but the fixing were not up to the job, so it has been redone and there are unconfirmed reports that a spirit level was used this time! As well as a vast array of John's personal tools, many thanks to those that are getting on with this necessary but unappreciated task (I suspect a more comprehensive/accurate article will appear in next "Express" - Strathspey Railway Association Journal.)