Another Covid-19 Lockdown from Boxing day, pretty much meant that Strathspey Railway went into hibernation again, except for Georgie! - seeking out and loading the required P'Way materials for the new rail connection for the proposed Aviemore Running Shed. 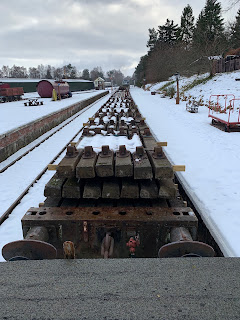 P'Way train awaiting signal from a wintery Boat of Garten - destined for Aviemore. Photo from the more than socially distanced brake van, by Resident Station Master acting as the lowly freight guard again!
-----------------------
By the end of January, a limited local PWay squad assembled at a still snowy Boat of Garten, chainsaws loaded and fires lit in both brakevans, off we set towards Aviemore. 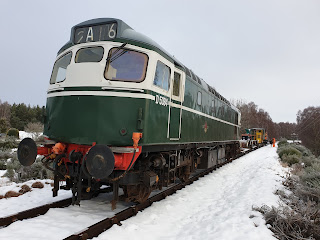 The rearmost brakevan detached near Kinchurdy Cottage and chainsaw operators Ian & Fergus, assisted by Andrew & Kevin set too cutting many overhanging trees on the Down side of the line. 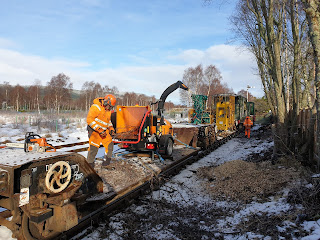 On arrival at Aviemore our train propelled into the headshunt, where previously felled trees and branches awaited their fate! Georgie had hired a woodchipper for the weekend and carefully loaded and secured onto the flatrol wagon above, John feeding it, myself, Martin and Georgie dragged the offending foliage to site. 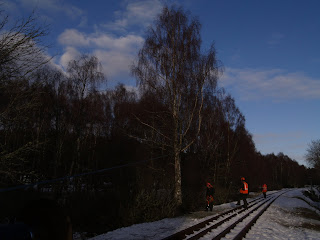 Once finished at Aviemore we returned to Kinchurdy, where a considerable amount had been cut and dragged up the embankment to get chipped. On completion, just when thought we were getting home, Georgie suggests a big birch tree, rope attached to the train taking the strain, to persuade the tree to fall - not on the fence or the telegraph wires - it didn't and we made short work of de-limbing and chipping it. As the chipper was hired for the Weekend, we felt it would be a shame to waste a Sunday's hire with it sitting idle.
-------------------------------
Sunday - On my arrival at Boat of Garten at 0800 the temperature was a cool minus 12 deg C and it took Georgie and me sometime to get the class 27 from the carriage storage shed onto the mainline as the point rodding was frozen solid, slidechairs were perfect, so must be have been an S&T problem! (not that we could use Signals! for fear of them sticking off or detection problems)
Squad and PWay train picked up from PWay Depot and propelled to Lynchurn No 1 level crossing, dropped off Fergus & Ian with their chainsaws. 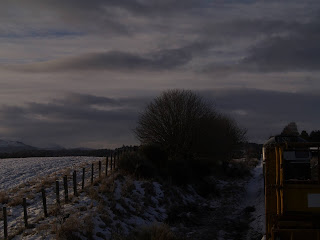 We drew forward short distance to Drumullie LC, to again try improve sighting as above. 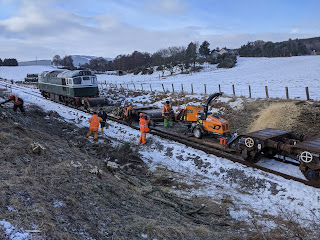 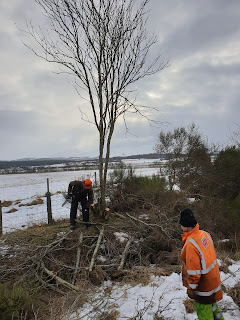 Another weekend felling trees but alas no chipper, as the weather forecast was dire.
Fergus is a dab hand with his tree surgeon chainsaw, Mike poised to haul it all to lineside for ease of disposal another time. 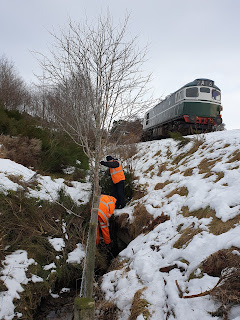 Angus on the handsaw and Andrew encouraging it to fall the right way! 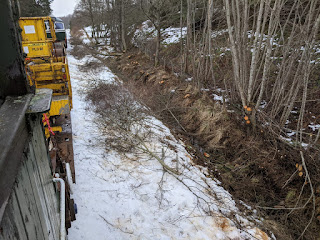 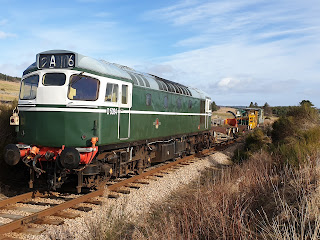 Another weekend more recently again the chipper was hired and good weather was had, here near Fishermans' (foot) Crossing, previous day most of the already felled wood was chipped. 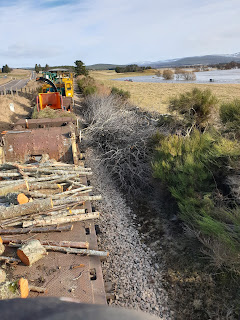 Decent lengths of soon to be firewood on one Flatrol and the rest shredded very efficiently (not on to the road!) 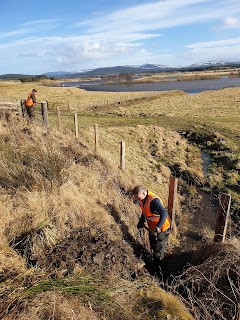 As Kevin was missing shovelling  ballast so much he was detailed to do a bit of culvert clearing, here very close to Lynchurn number 2 level crossing, only adding to the flooding of the river Spey, which Fergus says he was looking at but I suspect he was also appraising his fencing work of last year. 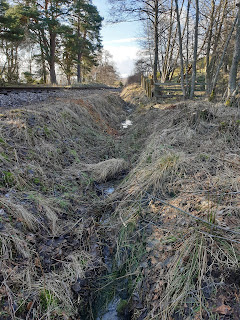 Kevin and I were dropped off near Broomhill at the choked ditch, now that the shrubbery had been cleared, whilst Fergus, Angus and Georgie set about digging out the very muddy level crossing at Broomhill Station. 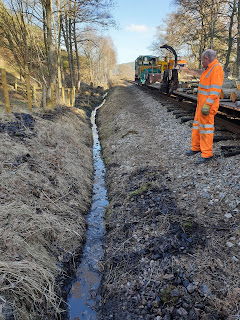 On their return, Angus admires the improvement! (apparently couldn't find his wellies - sensible!)
Thanks to all that attended over the weekend.
Posted by Neil at 17:12 No comments: