About a Month ago we started work on an approx. 100 yard section of track, just beyond Kinchurdy bridge see PWay Blog of 21st October. Since then Georgie has dropped ballast on the Track "shoulders" and on Saturday a large squad created the "up cess", tidied both shoulders and dug the holes so that stone blowing could commence. 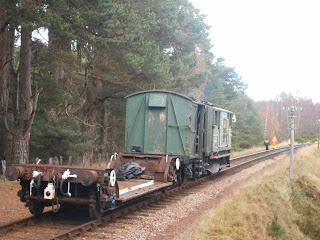 As we had an increasingly rare "Possession" of the line (no service trains running) the Tool Van and temporary Mess Van were able to be stabled at the worksite for the weekend. 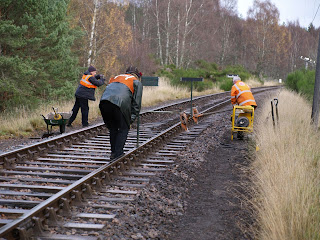 Here Georgie is sighting and instructing Mike to jack up the track to the right level and Andrew is doing the same, using the crosslevel as a guide, so that both rails are on the jacks to exactly the required height.
A number of years ago the PWay Squad Volunteers clubbed together to purchase the brand new Stone Blower which is simply a petrol driven air compressor with an air hose 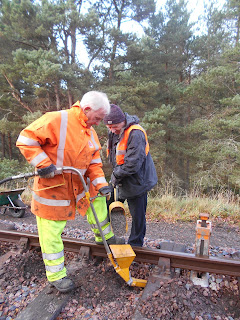 to the above attachment, which Andrew is steadily feeding the small crushed stone ("chippies") into the hopper and the compressed air blows it into the space between the sleeper and the old trackbed. The aim is to completely fill the void so that when the jack is removed the track sits solidly on its new foundations. 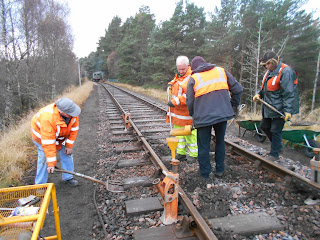 These simplistic few words make it all seem easy! But we all found those small muscles that we didn't know even existed were exercised.
As punishment for not getting the Mess Van fire to light first time, we put Andy above left, on to the wheel barrowing of the chippies, thus only being subjected to his Glasgow patter intermittently!
Thanks go to Andrew, Andy, Angus, Ben, Ian, John, Les, Mike and Roger over the weekend Georgie seemed satisfied with the end result.
﻿

A row of 60 leylandii trees had been planted long ago along the edge of the car park at Aviemore station, the section now in use by main line Scotrail passengers.

After consulting with our neighbours in Dalfaber Road, who had been complaining about these trees, we organized a team to remove them. 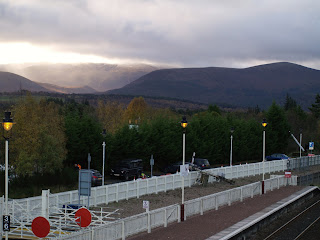 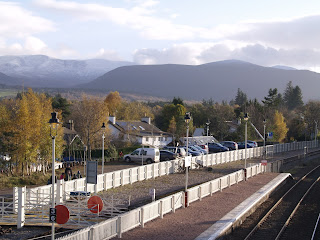 and after photo to set the scene.
A number of hurdles had to be overcome, not least closing the car park for the duration of the work, a task skillfully completed by Graham Sutherland, who blocked off bays during the week as they became vacant, leaving only four cars parked by Friday, which we were able to work around. The recent courses attended by our chainsaw operators is now also paying dividends for the railway, as these tasks can now be done safely and expediently. 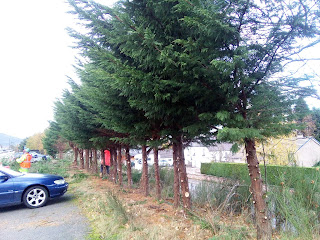 Brashing done, to ease access for felling.
So on Friday a team of ten commenced work, with Ian and John operating the chainsaws and Graham and Big Davie driving trailers to provide a continuous shuttle carting the brash to the burning site. The work continued on Saturday morning with Ben now also operating a chainsaw, while Ian was preparing for the Strathspey Railway Association AGM. 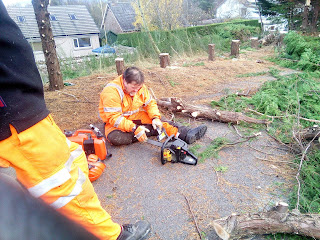 Ian giving chainsaw TLC or having a well earned rest 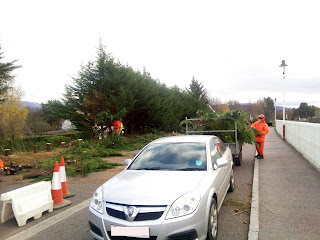 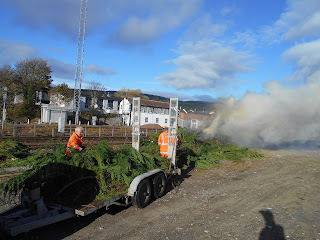 And unloading the other onto the fire 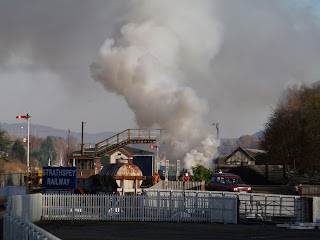 Not much more smoke than a steam engine! 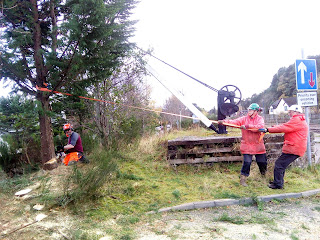 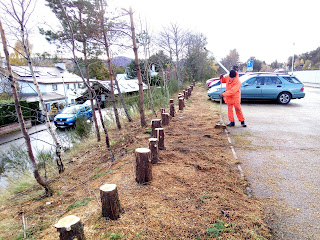 Colin sweeping up
All 60 trees were cut down to a height of about 2 foot; this to provide a marker for the parking cars, and all the brash was removed and burnt in the yard near the coal bench. 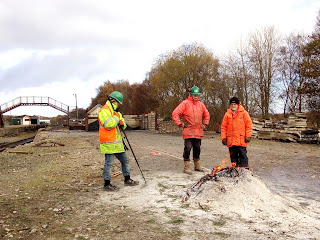 Job well done-all that remains of 60 trees.
As a welcome break we attended the AGM in the afternoon, before continuing with the work later.


There are another 12 leylandii further along by the coach park, but time constraints meant that by the  Sunday only the Ellon Team of five were still working, so we cleared broom from the area, and cut the lower branches off the leydandii to provide improved light and views for the adjacent houses.


Another job for the New Year.


(Words from Colin and some photos from Ray and Neil)