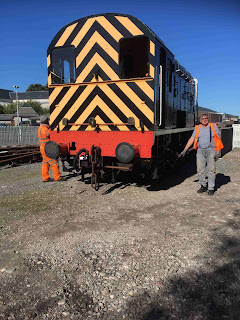 Peter here noting the end of railhead, just beyond the turntable at Aviemore. 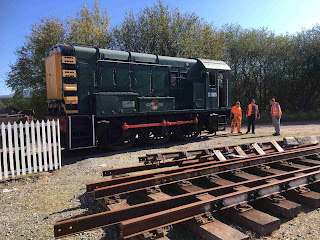 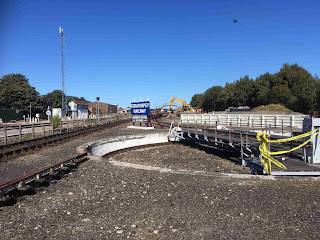 After a bit of shunting, most of the donated Network Rail rails, Switches and Crossings, timbers and baseplates were loaded onto the P'Way train by Georgie using RRV. 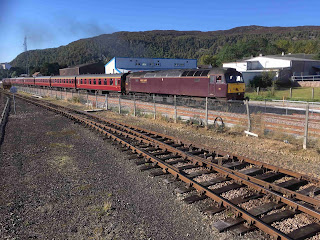 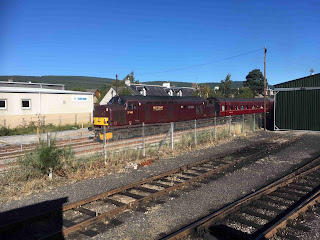 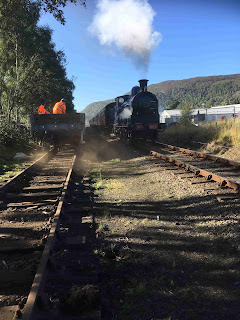 Our own slightly older locomotive is more atmospheric, whilst Ian and Peter clear out surplus ballast from a Grampus wagon. Another non service day is required to get the last of the donated material. The Road Rail Vehicle (RRV) suffered an oil warning, so a general tidy up finished off the day.
Thanks to Georgie, Steve, Ian, Peter and Mike- who supplied all photos/info.
﻿
﻿
Posted by Neil at 21:29 No comments:

The plan was to load more Network Rail redundant material, from the far end of the Car Park at Aviemore but the PWay train was found to be at Boat of Garten.... So Georgie consulted her Job Bank and re-tasked the Squad. 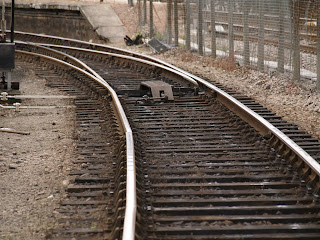 Above looking South into the Loop a Aviemore Station, the short section of flat bottom rail keeps on trying to resemble a fifty pence piece! instead of a smooth curve. 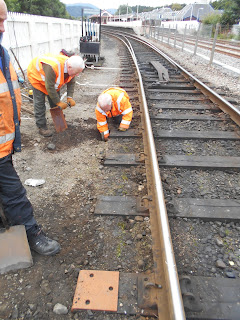 We slewed the track into the correct alignment and dug deep thin holes to accommodate the four "Lateral Resistance End Plates" (easier said that done as we came across old metal pipes and worst of all, old bits of buried sleeper - novel use of the sleeper drill made it easier for Bruce to use his sharp pruning saw) above Roger leaning on the end plate (he is on light duties!), waiting for Mike to get to the correct depth, with Iain having just filled and compacted the "ballast". 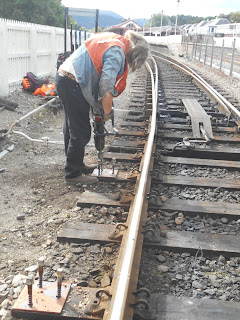 Sleepers drilled and Georgie screwed down the chair screws - hopefully it will not creep back to the old alignment! 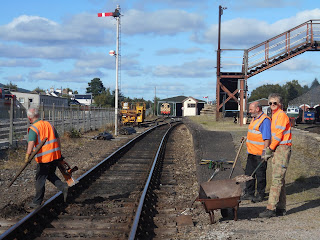 After lunch In Georgie's usual fashion "a few dipped joints to do Boys" - This consisted of doing Measured Shovel Packing on nearly every joint right up to the platform ramp of our old Speyside Station, certainly Iain and Bruce (right) were thourghly reacquainted with the dark art of MSP! and all of us were knackered by the end of the glorious afternoon.
Thanks to Bruce, Mike, Iain and Roger (half day) and Georgie who still had to unload all the tools after we had gone.
﻿
﻿
Posted by Neil at 09:37 No comments: