Another great turnout, considering the snow earlier in the week.

Mike was delegated to take a squad to finish off the re-sleepering, packing and filling in ballast on the mainline, this was completed by lunch and he assured us that it is now a prize length!- Alas no photos. 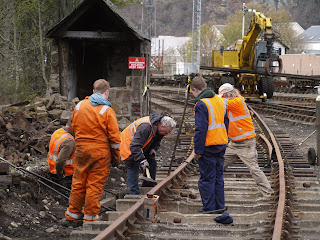 Our first task was to key up the Up rail on the concrete sleepers, fine and easy when the formation is level, not so otherwise - as elevating concrete sleepers is not easy, as they are somewhat heavy! Above Fergus rarely seen sitting down on a job - actually using his weight to lever the sleeper up, to allow Bruce to open jaws of chair to allow Andrew to hammer the key in, often Justin and Bart used bars too, to get extra height. 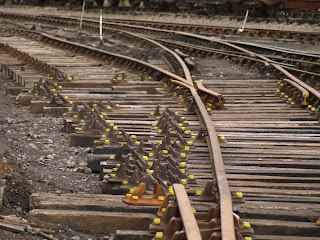 Our next task was to insert all the chairs on the closure rail, this necessitated the removal of all the interlaced sleepers but at least they are wooden, again keyed up, this time gauged, only one hole drilled and screwed down, to allow for further tweaking later. 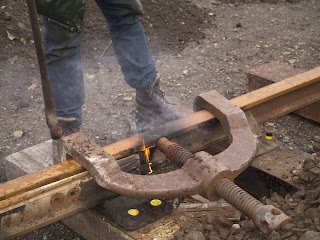 The Shed Foreman Nathen kindly heated up the rail using the Shed gas burner so Georgie could use a "Jim Crow" (anyone know why named so?) to slightly bend the rail into requisite shape at the toe of the switch. 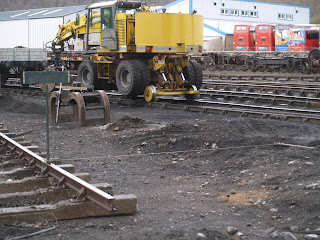 Later in the afternoon a crucial bit of PWay kit - the string appeared! - to determine where the target board was to be positioned, so that the rail in number one road is at the same elevation as the new track. 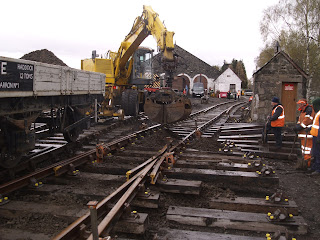 After considerable jacking up of the crossing, Georgie used the clamshell bucket to drop ballast, so we could furiously pack it under the timbers, remove jacks, move forward sight & jack up and repeat. 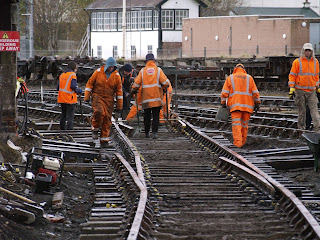 Fair to say we were all pretty tired by the later than normal finish.
Thanks to Mike, Martin, Angus, Bart, Justin, Fergus, Iain, Andrew, Ben & Bruce who regularly joins us from a warmer Wiltshire.
____________________________
Addendum provided by Kevin - Sunday saw Georgie, Alasdair, Bruce and Kevin continue works from his recall below -
"We slewed over the rails using angled jacks to improve the running line (again),

We drilled and screwed the chairs to sleepers (without a chuck key as it had gone missing YET AGAIN) in so doing we flattened all the batteries and got through all remaining fuel !

We dug out the interwoven sleepers at the points, leveled the base and repositioned them.

And, we had a staff meeting and concluded that all future on-site talk would be conducted in scottish-gaidhlig" (Gaelic? - Kevin might hail originally from South of Watford?) 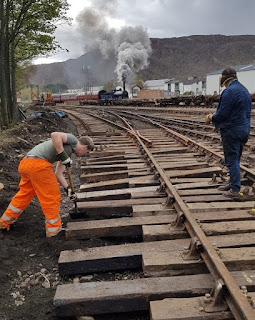 Alasdair backfills under the newly repositioned siding sleepers whilst Georgie multitasks by delicately providing a balancing lift, assesses the newly aligned and screwed rail and checks for any vicarious activity on board the passing crew-training engine This delicate balancing lark is harder than it looks!"

Many thanks to all.

Mike reports - Good turnout yet again, meant three small PWay squads at Aviemore! Two re-sleepering on the Mainline between the Signal Box and Aviemore Station and one on new works in yard. 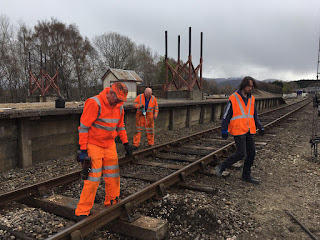 We welcomed Sam (on right) whom at last was allowed to travel from Aberdeenshire to join us, glad to report that he felt the long trip was definitely worth it for the day and looks forward to the next time, who knows our Hostel like accommodation Spey Lodge may have re-opened by then. 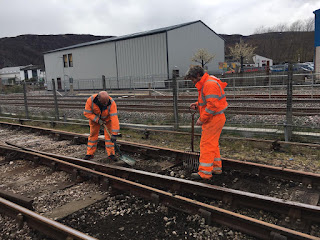 Iain (left) also glad to return to Aviemore, as travel restrictions now lifted, on the right is another new recruit Alasdair (two in one day amazing!) looks like he is getting to grips with filling in ballast after sleeper changing. More sleepers would have been changed had the new works squad not hogged the generator and drill! 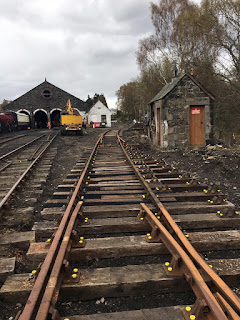 This was the scene at close of play on the line into proposed new running shed.
Thanks to Georgie, Ian, Kevin, Angus, Martin, Roger, Iain, Sam, Alasdair and Mike who took the photos and supplied info.
---------------------------------
Earlier in the week, thanks to Ian Stanworth's dogged searching and perseverance, a replacement for the "Jacker Packer" that was totally destroyed in the catastrophic Shed fire in the Summer of 2019 duly arrived in the yard at Boat of Garten. As its name suggests, it Jacks up the track and Packs ballast under the sleepers - saving many hours of hard manual shovel labour. 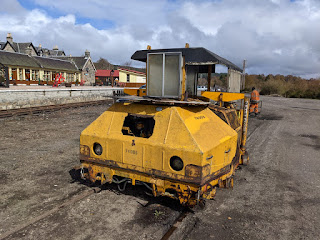 Having been cast aside in the bushes at Titley Junction for sometime it looks a bit worse for wear but the guys there assured Ian it does run, the driver that delivered it was not happy that a considerable amount of hydraulic fluid had leaked over his lorry! (it is a long way from Herefordshire) After John Sinclair our Plant Engineer had tightened things up and inserted a new battery.
. This was the scene on Friday being driven by Ian (after refreshing his memory from the manual) from the yard to our new Plant Maintenance Shed (Morley's II) for more in depth maintenance and some TLC.
Let's hope we will see it in use in the not too distant future?
Thanks to John for sharing photo/video and of course Ian - maybe it might pass its Noise and Vibration test someday!
Posted by Neil at 20:04 No comments: