Today Myself, Ian Stanworth, Mike Tough and Andrew McCracken had a midweek PWay day. We set off walking from Boat of Garten towards Aviemore in pouring rain, the plan was to strim and cut the vegetation round all the quarter mileposts and improve the sighting at Level Crossings enroute. As time went on our tools let us down, one loper was useless and one saw broke 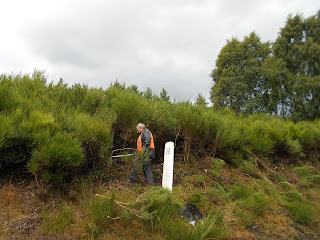 and the vegetation just got thicker and thicker in the form of broom, which seems to have taken over the lineside in places. Above Andrew rediscovers the 86 milepost, whilst Mike and I tried to dispose of the cuttings as best as we could but had difficulty keeping up with the prodigious output of "Machine McCracken"! 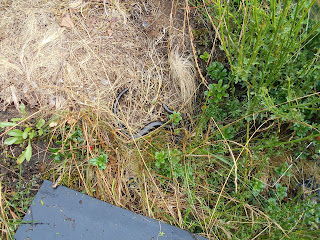 Looks like the grass snake? had the right idea sheltering from the constant rain under one of the fire beaters.
﻿ 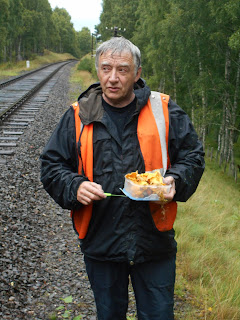 ﻿
At the end of the day Andrew (the "lineside forager") got his reward - chanterelle mushrooms apparently.
﻿
Posted by Neil at 22:07 No comments:

Dislodged & loose small pieces of sandstone cladding below the walkway at the Boat of Garten Nethybridge Road under bridge were made safe on 30/17/7 by Mike Tough. Until such time as 2  other potentially loose sandstone pieces were removed a temporary speed restriction was imposed. This was done on 4/8/17 by Ian Stanworth & Mike & the restriction lifted to the relief of the footplate crews. Other minor repairs to coping stones are planned. 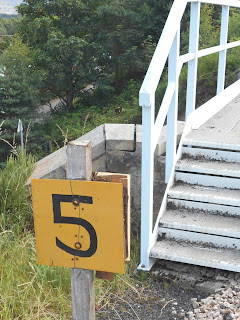 Ray Kenyon and Colin Frost did some painting over 24/25 July of the gates by the Engine Shed at Aviemore. 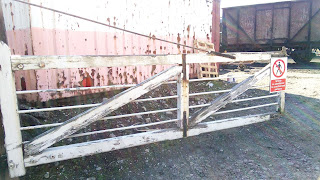 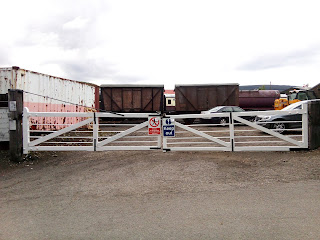 And after
The new board holding the signs on the middle of the gates has been made, and painted by Jack in the carriage shed and will be fitted to the gates when completed. Thank You to Colin for information and photos and as he says "improved kerb appeal". Another painting job was started but I will save it for the completion photos.
As per my last Blog the PWay Squad finished fishplate oiling at the 89 milepost, or so we thought, during a subsequent weekly Track Inspection, I noticed one spanner, one oil can opposite the 89&3/4 milepost and that the fishplate oiling had been completed up to that point. A big thank you to the unknown Warrior. 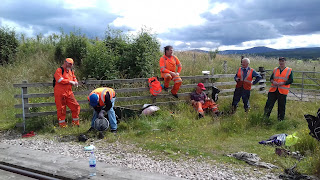 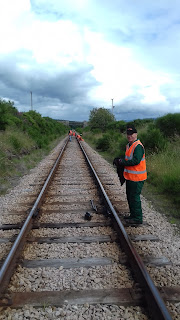 ﻿
Glad to see Ben is still smiling as they approach Tullochgorum Bridge where they finished for the day.