Plumbing in Water Crane at Boat of Garten - 27th February 2016

Jim Clark made a welcome return after his health wobble late last year, everyone was pleased to see him and of course his plumbing skills were soon put to good use. 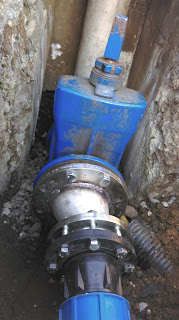 Above shows close up of the 6 inch valve furthest away in blue and connections to the plastic piping. 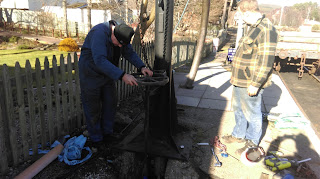 Maybe a way of merging these photos but beyond me!
Anyway Jim does the honours in opening the value with Stuart looking on nervously! 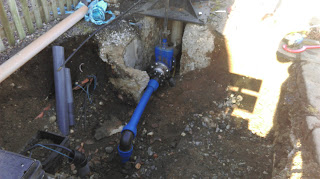 I think there was shuttering mentioned to pour in concrete, encasing the metal parts?
Thanks to John Wood for the photos and information.
﻿
Posted by Neil at 20:10 No comments:

The Jacker Packer has been stored on it's stand by the turntable at Aviemore for some weeks now, poised for action and once the Diesel Multiple Unit had departed Aviemore Station Limits, we set about putting it on rail 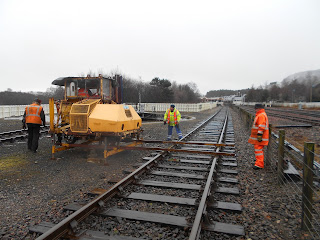 by laying the stand rails on the rails at right angles 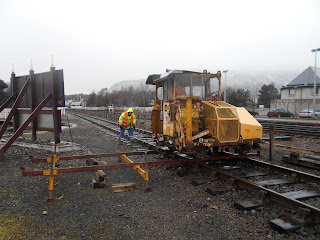 then Stuart carefully drove forward, below the centre of Packer a hydraulic turntable foot lifts the machine upwards to clear the wheels from the stand rails, then by hand it is rotated 90 degrees and by lining up the wheels, carefully lowered onto the rails, then driven to the worksite which was the Loop line in the Station. 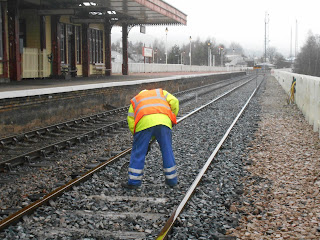 Ballast having previously been dropped and ploughed by Georgie had to still be shovelled onto the far away shoulder, so that there was enough to pack under it. Above Angus (who braved the miserable weather two days running) starts this process. 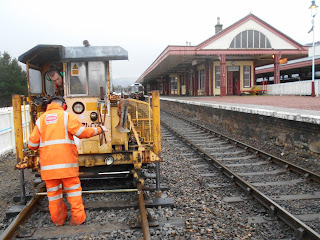 Here Mike guides Stuart on getting the track level. As mentioned the DMU was running, which was a pity as I could have done with more breaks as there was no requirement for it to use the Loop. 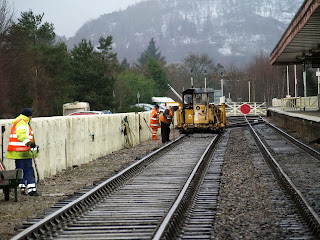 Of course after packing there was the obligatory tidying up of the ballast ,which we did not manage to complete but it sure looks a lot better than it did.

I wonder if this was the last sleeper to spike? 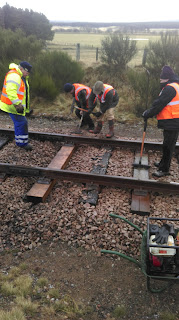 Angus, Andrew, Fergus and John braved the elements to assist Georgie and Stuart in drilling, spiking, packing and boxing in the last of the sleepers, finishing off the major spot re-sleepering exercise since the 4th July 2015 from milepost 89 and 3/4 up to and just beyond the 91 milepost. I don't recall exactly how many were changed but I do know that all concerned are glad that it is finally finished. 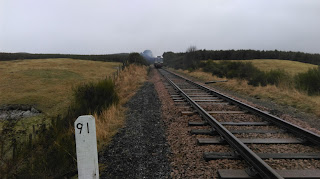 As can be seen from above the opportunity was also taken to tidy up the formation and cess. Thanks to John Wood for information and photos.﻿
﻿
Posted by Neil at 10:46 No comments:

Timber replacement on the switch from the Mainline into the Headshunt at Aviemore required a good turnout and the Volunteers didn't disappoint. 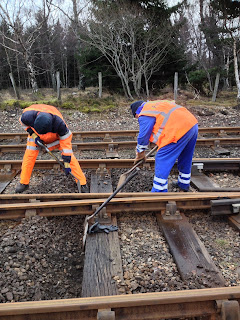 Above Martin, Angus and I guess John H (taking photo) dig out pebble ballast of the Mainline 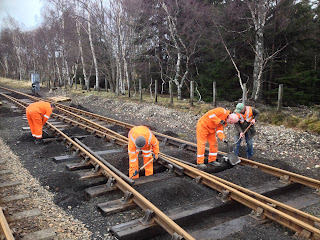 and Neil H, Ian, John W and Fergus dig out the much lighter Ash of line towards Headshunt. 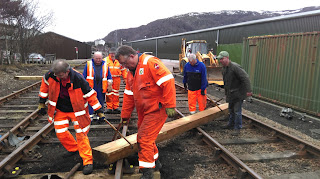 Maybe a 15 foot Timber being manpowered into position. 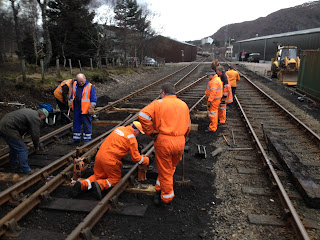 7ton lifting jacks need strategic placing so that the required section of rails are lifted and the old, very heavy, water sodden timbers can be pulled out and the new ones put in. 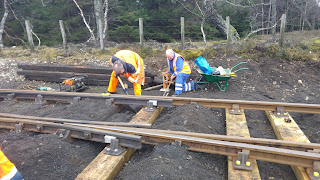 recently retired Angus lifts the Timber whilst Martin packs material under it, prior to drilling. 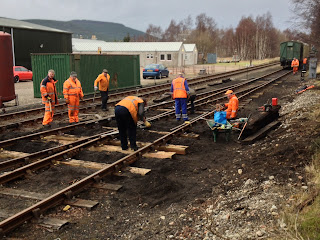 I believe much to everyone's delight the task was completed through teamwork and pleasant working weather.
To keep the peace I have used photos from John Hornby, John Wood and Keith Holyland, Thank you all.

Re-sleepering towards 91 milepost and beyond - 4th February 2016

Small squad of three continued re-sleepering towards 91 milepost, we managed to complete the 14 beds that were dug out, to find two spare sleepers that were put to good use further Down the line. Drilling spiking and boxing-in are the remaining tasks. No further photos of re-sleepering are thought necessary for a while! 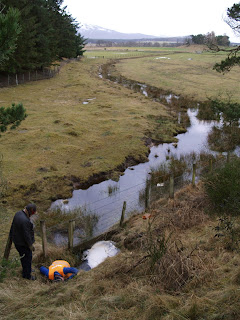 Whilst we were in the area, Georgie got Mike to have a look at a culvert that had previously been spotted, when I think Georgie, John, Angus and Fergus had the unenviable task of clearing ditches and culverts of any debris, from about Fishermans' Crossing. 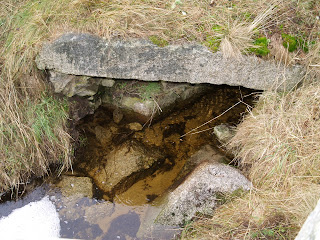 Difficult to see from the above photo but one of the granite blocks in the water are meant to be supporting the left side of the large heavy lintel, which if left would eventually fall, possibly blocking the culvert. A plan is now in place, once the water levels go down to repair it. 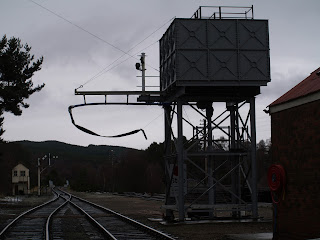 Back at Boat of Garten, Georgie has for some time been working on the water tower, giving it an almost complete, new all weather watering facility, as the out of shot, water crane on the Down platform had a tendency to freeze up and as yet it is not yet repaired after a burst. This replaces the temporary measures put in place as seen in November Blog. No doubt the Signalling & Telegraph Department  (S&T) will complain about our two extra stay wires obscuring their yet to be commissioned signal arm but compared to the just visible Stop Board !
﻿
Posted by Neil at 17:28 No comments: