Deformed or short rails in the area of Tullochgorum have been an issue since the track was crudely laid, almost 20 years ago! As I recall the track came in panel form from sidings at Kincardine Power Station.
A beautiful frosty cold morning saw an excellent turnout at Boat of Garten where the Works Train had previously been loaded up through the week by Georgie. 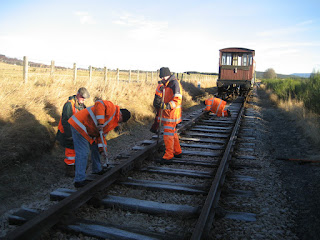 Andy slackens off fishplate nuts at 90 1/2 milepost, in background looks like Jim praying in readiness for the removal of the dreaded elastic spikes! 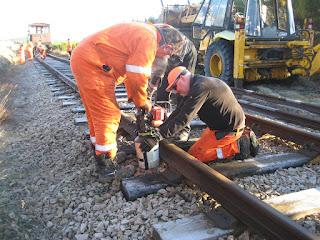 Neil and John, supervised by Georgie try out a "new" Rail Drill, which was donated by our late PWay friend John Morley (certainly looks lighter than our old one) 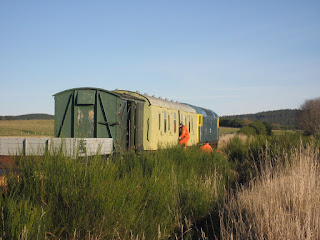 2 crippled rails were changed, did a bit of slewing and ballast tidying and then dropped chippings for another days work, finished off with a hurl to Broomhill to run round the PWay train and back to Boat of Garten.
Thanks go to Steve for expertly driving our class 27 locomotive, Georgie for Leading the Gang - Roger, John, Andy, Andrew, Martin, Jim, Neil and not least Mike for supplying the info and photos.
﻿
﻿
Posted by Neil at 05:23 No comments:

Apologies the PWay Blog was shunted into the sidings whilst my computer was ill, hopefully normal service will be resumed from now on.....
Biggest squad this year! turned out on the 7th of January in excellent working weather. The task was MSP (Measured Shovel Packing) on longish dips in the track at Croftnahaven in the morning and we moved onto Tullochgorum after Lunch, where a considerable amount of ballast was dug out of the four foot and used to strengthen the Down shoulder by Tullochgorum No 1 Level Crossing as well as MSP, again over a couple of 60 foot lengths of track. 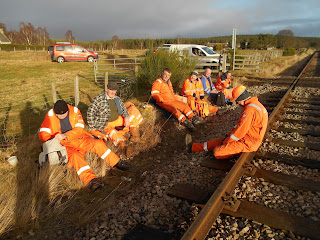 Above the only photo I took? at Crofnahaven No 1 LC - Left to Right Jim, Roger, Neil, Ian, Angus, Martin and John sitting on the rail, with the Boss in the comfort of the van. Mike Tough assured us he would have been with us had he not been at a
Strathspey Railway Board meeting. 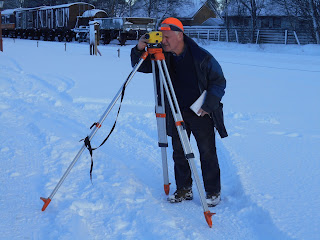 To be fair he did brave the elements exactly a week later - sighting for proposed drainage work in connection with the Catering Vehicles in The Roy Hamilton Carriage Shed at Aviemore.
﻿

The Squad headed out by car to park up near Kinchurdy Bridge, we eventually managed to scramble up the steep embankment heading for the 86 and 3/4 mile post. Georgie took the tools in his van through the forest.
Angus,Jim and Georgie carried out maintenance on the Track - replacing rubber pads, tightening chairs and measure shovel packing on the dipped joints. 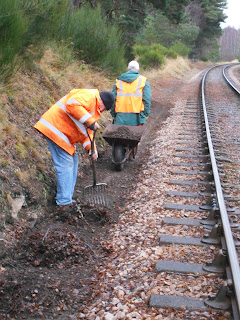 Myself, Andy and Roger removed all the combustible material from the Down Cess - which was relatively easy, as it was mostly leaf mould and pine needles, until we came to a steep cutting and we had to wheelbarrow the stuff out. Under the canopy of the Scots Pines the ground was amazingly dry, even though its the start of December! 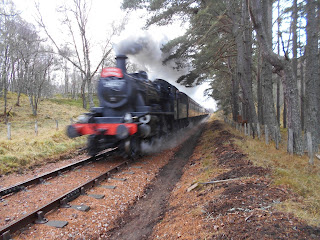 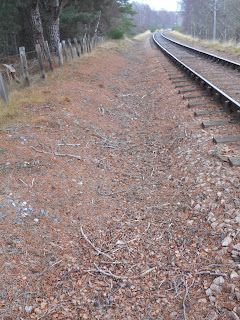 Still more to do though......
On Sunday, In bitterly cold but sunny weather, saw Angus and Andy putting special Winter slide chair lube on the points at Aviemore, to hopefully prevent them from freezing.
﻿

For some considerable time this job has been planned but the RoadRail Machine has not been working.
﻿ 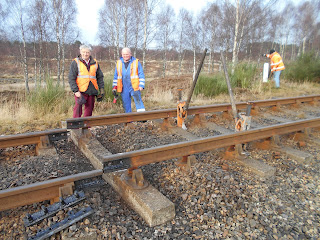 Again only possible when no public trains running for obvious reasons, above Andrew and Angus pose for photo with Andy clearing the ever growing undergrowth round the milepost.
Method was to dig out ballast round sleeper to be changed, knock 10 keys out either side, jack up rails 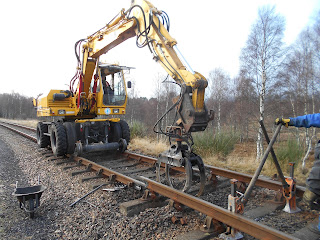 so the Machine could pull the heavy concrete sleeper out, we dig out bed and Machine puts in new one. Key up, pack ballast under new sleeper and tidy up shoulder and four foot. 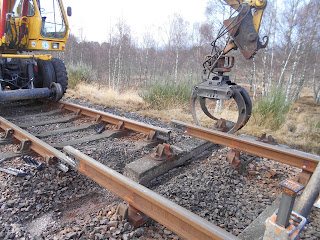 In total about a dozen were changed over the whole weekend with still more to do at a future date.
Posted by Neil at 20:31 No comments:

Advantage was taken of the fact that no public trains running, meant that we could dispose of a considerable amount of ash from the Engine Shed, Georgie had previously loaded it into four wagons, two of which were emptied on the Saturday by Andrew & Andy and two on the Sunday below
﻿ 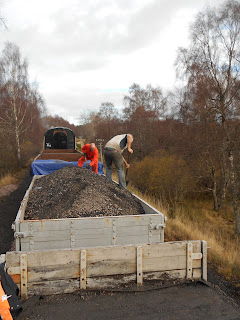 Roddy and Stuart make a start on the final mountain! 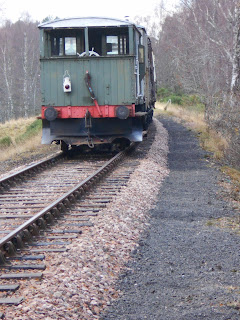 This was hard but satisfying work as a tidy hopefully weed free level cess was left in our trail at various locations between Aviemore and Boat of Garten. 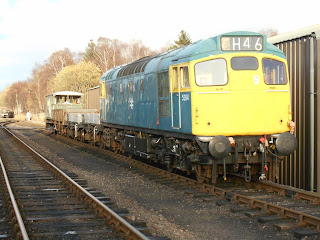 And finally the empties get returned to the yard at Aviemore Shed.
Posted by Neil at 20:31 No comments:

To turn a coach on the Turntable at Aviemore takes a considerable shunt to get the engine to propel it onto the turntable and the same shunt in reverse to get it back into the Sheds.

The solution was to extend the Track through the fence partly into the carpark road, so that the engine can pull the coach onto turntable, couple off, draw forward clear﻿, turn coach thus saving considerable time and effort. 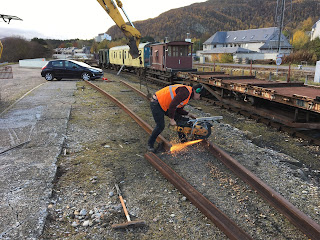 Stuart cuts rail to required length, much to everyone's disappointment his trousers weren't held up by the rail hook! 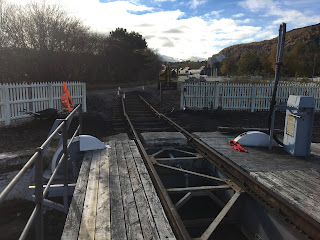 Rails put on sleepers and keyed up. 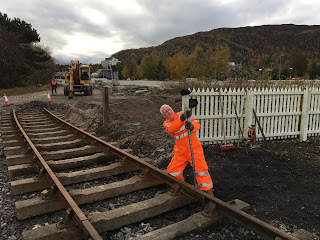 Bill Johnson puts his back into tightening up the fishplate. 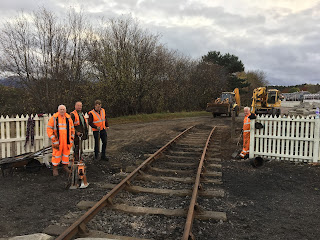 Ballast in filled finished off the days work. Thanks to John Wood for info and photos. 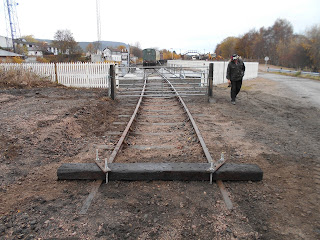 A few weeks later this temporary rail stop was installed as was the gate, still to do is the extended fencing.
Posted by Neil at 20:31 No comments: 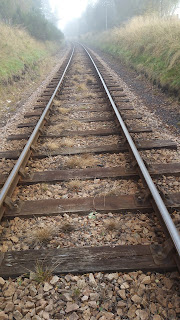 - removing the large dead weeds from the "four foot" (between the running rails) from Kinchurdy Level crossing almost to the Headshunt at Boat of Garten. 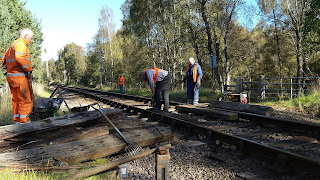 By the time this was finished the sun was out and we headed back to Kinchurdy Level Crossing which Georgie and John had removed all the slippery sleepers, as the Crossing was going to get completely renewed, which we did with a fair amount of effort, barrowing surplus ballast from elsewhere to the now predominantly ballast level crossing. 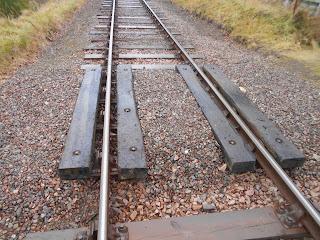 The finished product.
Posted by Neil at 20:30 No comments: