Ever since the Boat of Garten bridge was put in for us at Highland Council expense in 1996, the approaching trackbed on either side was raised considerably with a high point either end of the bridge but flat on the deck itself. Todays task was to finally rectify that and have a nice smooth curved vertical profile over the bridge seamlessly joining the existing track profile. 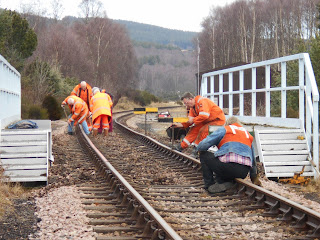 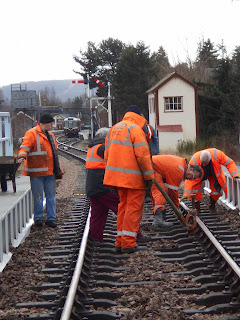 Once cross levelled by Georgie, taking in into account the cant of the curve and marking the measurement at each sleeper, the business of shovelling in under the sleepers, the predetermined exact amount of crushed chippies started, 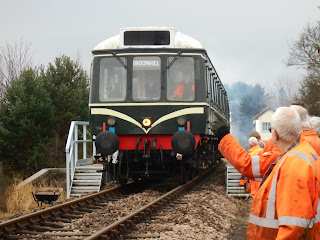 fortunately the Diesel Multiple Unit was running to give us a break, at least Jim only gave Steve the Driver one finger and not two! 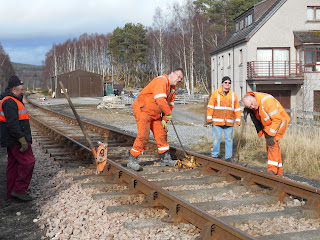 MSP complete by mid-afternoon, Georgie announces "a bit of slewing Boys" a few groans but novice Rigger Neil mastered the small but powerful Slewing Jack very quickly and he had the job done to Georgie's satisfaction too soon! 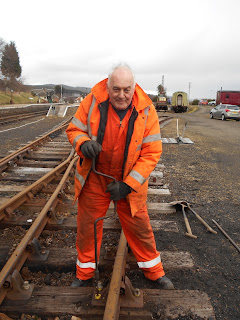 As Georgie got us to finish of the day by changing three broken chairs in the Yard, above Jim was well impressed with the hand drill, not sure which is the oldest?
Thanks go to Andrew, Andy, Roger, Jim, Neil and Georgie.
(Angus went and watched his team only draw with Ross County)

With time running out before the new Catering starts on the Railway, a large squad was called on to get things done quickly, the digging was mostly done on the Friday. 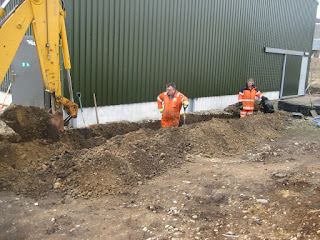 Above Rigger Neil leaning on smallest spade ever, looks on enviously at the swift removal of earth and who says size doesn't matter! Martin is glad of the break. 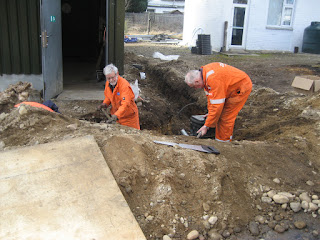 Above Colin and Plumber Jim.
Mike Tough reports- "The water to the shed had to be turned off whilst we plumbed in the new toilets in the Shed ...this caused drama & delay to the power washing of the 08 ahead of it’s imminent paint job .. all ended ok & the new toilet’s were working by lunchtime & Jim as is the plumbers right, demanded first use, Jim subsequently reported there were no leaks "which is above average""
Mike managed to lose Colin's best file over the two days and had to take the associated ribbing. 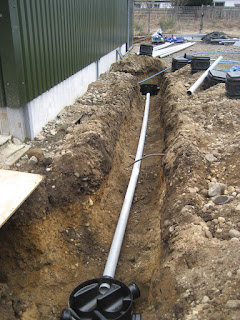 Thanks go to Neil Howie, Martin McLeod, John Wood, Colin Frost, Jim Clark, Ray Kenyon who sent many photos and Mike for the report and Georgie for the JCB digging.
﻿
Posted by Neil at 19:28 No comments:

Even though the weather forecast was not looking good at all, eight willing Permanent Way volunteers turned up as promised, meeting in the shelter of the Mess Van, which had previously been strategically positioned just South of the Aviemore Station Pedestrian Level Crossing. The task was to change 8 Switch Timbers, which had been individually identified by Georgie as life expired. They were purchased cut to measure from Raddery Sawmill on the Black Isle. 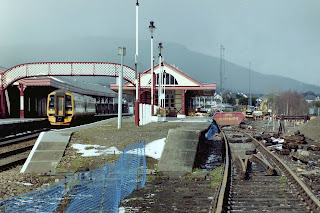 Above taken by Mike Tough in early 1998, when our track alterations took place in the former Back Platform and yard at the recently refurbished Mainline Aviemore Station. 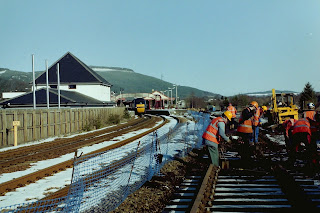 Again from Mike's 1998 collection (a Sunday at 1008ish, I guess), showing a younger looking Andrew McCracken in foreground and others? possibly preparing way for the catch points.
Anyway back to yesterday.... 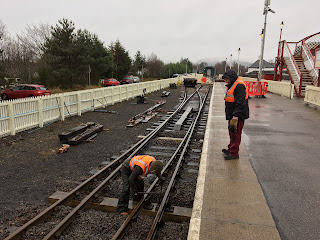 An older Andrew (not sure about the wiser!) casting an eye over Fergus. 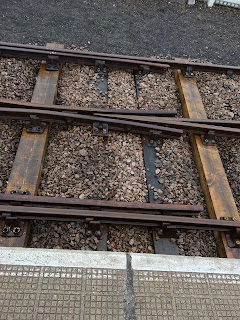 The longest Timbers were 16 foot, may have been a bit awkward getting them in, due to proximity of fence and of course the platform. 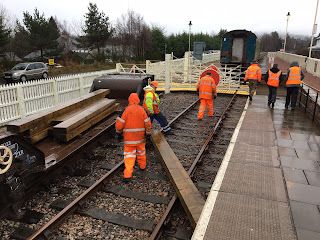 Did someone say tea?
Possibly thankful that there was a Private Photo Charter running Saturday & Sunday, giving them a break when the Loco run round, the photos don't convey the horribleness of the weather. Thanks to John Wood for last three photos and info.
Sincere thanks to Andy McClintock, Bruce Buswell, Jim Clark, Angus MacPhail, Martin MacLeod, John Wood, Andrew McCracken and Fergus for enduring the extremely wet and cold conditions for the entire day (weather looked better in 1998!) and as always completing the task set. Again thanks to Bruce, A.McClintock and Georgie for tidying up the site today.
﻿
Posted by Neil at 18:08 No comments: