At Lockdown Nethy Steel had erected the frame of Morley's Shed but all the cladding had already been delivered to site, it was decided for security reasons to transfer it all to the locked Boat of Garten Station Car Park. 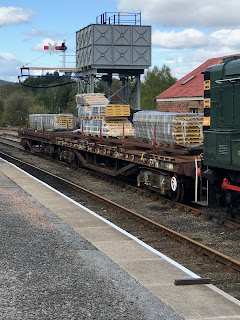 Above is the preferred method of transportation back to site, on easement of Lockdown mid May, similar Internal Traffic occurred this week, 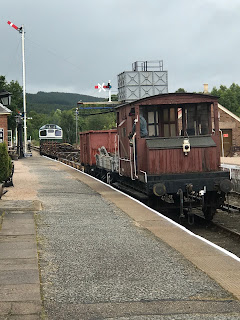 with the recent Network Rail donated material from Millburn yard being transferred from the car park at Boat to Broomhill Yard, pending its eventual intended use at the proposed new Aviemore Running Shed. Dave Green driving and Georgie Guarding. Both photos courtesy of Station Master Walters.
----------------------------------
Mid-Week Georgie gave us the unenviable task of attempting to tidy up the stored P'Way material at Morley's, so that a trench can be dug to bury the blue water supply pipe as seen below, 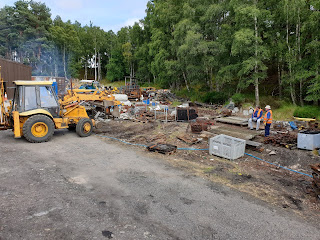 Peter takes a rest with Angus still standing just! (nothing is lightweight here) as Georgie uses the JCB to try and shift some of the overloaded wooden pallets, tell tale signs of Mike burning the rotten dud pallets in background and a general tidy up was undertaken. 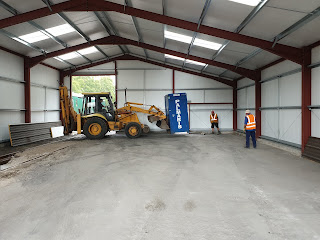 Finally the cludgie gets positioned inside Morley's. This was obtained free of charge some years ago, when we paid for and installed a similar double one inside the Hamilton Carriage Storage Shed at Aviemore (anyone got the keys for it though?)
Thanks to all that attended including Ian who seemed to have escaped my camera.
﻿
Posted by Neil at 09:18 No comments: 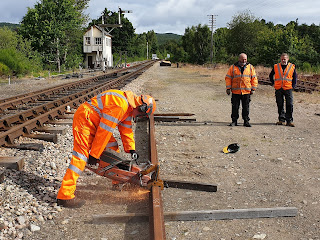 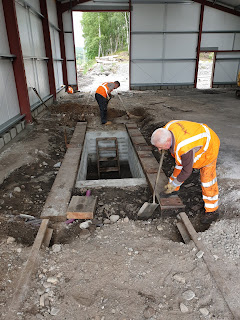 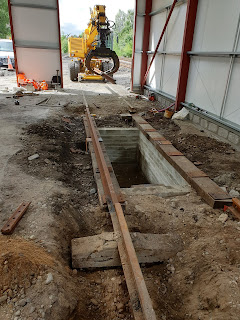 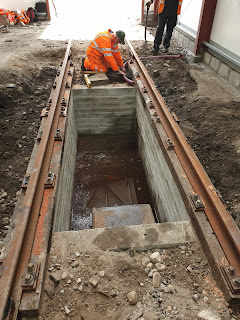 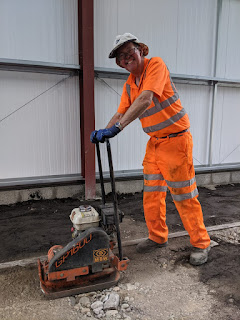 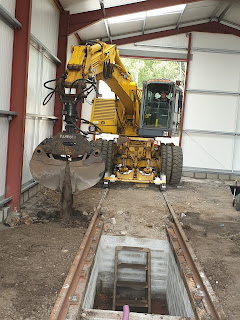 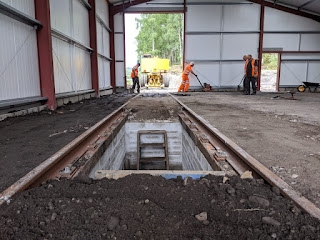 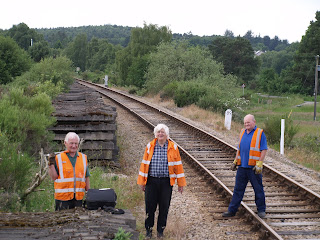 Mike, Les, Angus and myself try and tackle some of the bushes behind the stored concrete sleepers that Georgie wont be able to reach with the new flail, when it gets attached to the new Colmar, just visible is the top of the new "Outer Home" signal post, which requires to be  clearly seen from some 240 yards apparently. Chainsaw will be required next time for a couple of trees. I forgot to take an after photo. 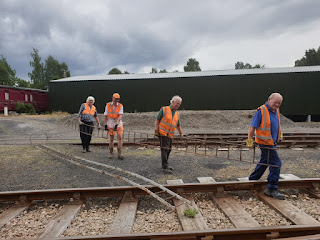 After lunch, S&T Dept in form of Rob Law asked us to retrieve a couple of signal ladders from behind the new storage shed (nothing is ever light! but it did make us socially distance) and take them to the North Signal Cabin. 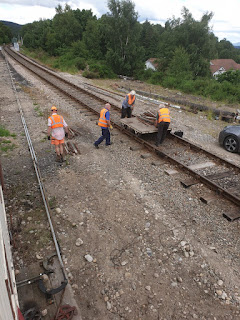 Likewise with a "few" signalwire posts.
We went home tired!
﻿------------------------------
A large squad met up at Morley's on Saturday.
Not to be shown up by the S&T's Blog's technological wizardry - above hopefully is a wee video clip of one of the empty Route/Traction Revision trips passing one of the day's worksites, in hopefully NOT new normal Summer weather! 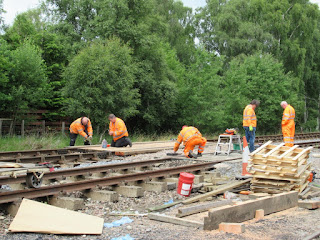 After a lot of measuring, cutting and notching led appropriately by Mr.Wood (far right)
The Road Rail Vehicle Access Pad (RRVAP as Network Rail call them) takes shape, basically its where Georgie can safely get the new Colmar RRV onto/off the track, 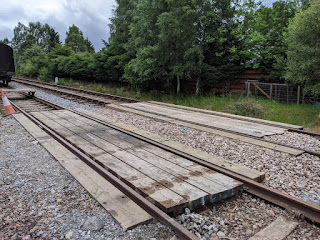 either within the PWay Depot siding or on the mainline (right). 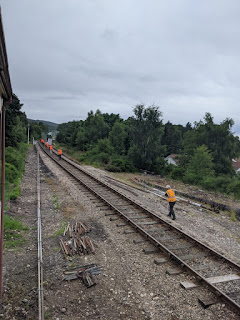 Yet again we were seconded to the S&T Dept, this time electrical cable hauling, all the way to the new Outer Home Signal.
Photos from Me, Mike, Rob and Video from John
Many Thanks to Georgie, Mike, Ian, Lauren, Iain, John, Fergus, Angus, Kevin, Graeme and Roger.﻿
Posted by Neil at 10:59 No comments: