An excellent turnout again meant in theory - "many hands make light work!"
In practice it was a different story but good progress was made through teamwork. 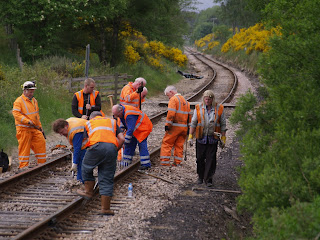 One team dug out all the ballast round the sleepers to be changed, which we started with great gusto but soon learned to pace ourselves and 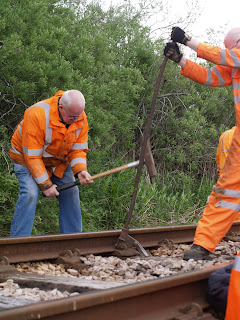 the other, tackled the unenviable task of removing the elastic spikes from the base plates, using the spike puller and increasingly, not so gentle persuasion from a large hammer hitting down on the plate to try and free the spike. During the day a hammer, a spike puller and a number of base plates were destroyed with a lot of huffing and puffing along the way. 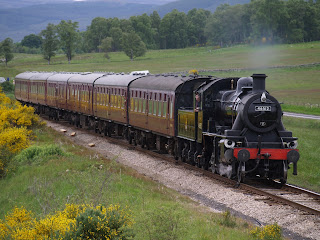 Service train approaches Lackgie level crossing, an Osprey was also allegedly spotted over the River Spey, entirely possible as Loch Garten RSPB Reserve only mile and half away as Osprey flies! Sorry no photos on this occasion but we are likely to be re-sleepering for some time as there are only166 to replace...........
Posted by Neil at 10:33 No comments:


Good to see some "new" faces in the squad - Steven who returns after a 30 year break! And Angus who hopefully, is still "Jim's friend", after Jim convinced him to come along.
Whilst the Headshunt has been disconnected the opportunity was taken to do some re-sleepering in the yard and yesterday morning our squad was large enough to split in two. 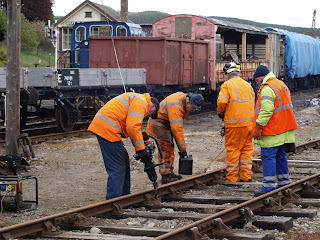 One squad drilling, screwing down and gauging the already changed sleepers, notice the light rail, wooden keys and some very old rail chairs. The other squad cutting and dropping in the remaining rails at the buffer end of headshunt using the JCB (360 Road Railer still sick). 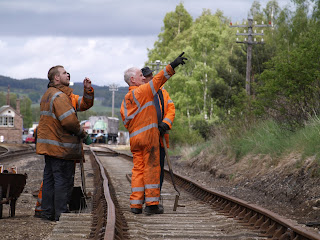 Mike thinks he spots a rather inaccessible lost golf ball, to add to his collection 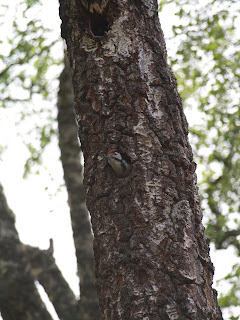 but alas, no, a baby woodpecker! 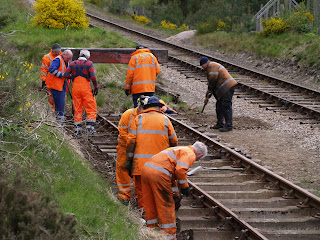 The remainder of day was spent packing and tidying up the formation. 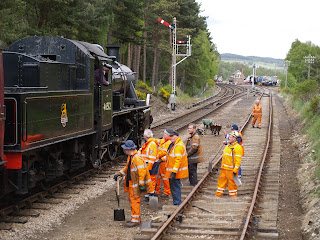 With the odd welcome break, look closely and you can see the G clamps holding the fishplates securely until the rail drill is mended. Notice where Fergus finished off doing a very neat job of creating the Cess (walkway) a few weeks ago. Meanwhile Georgie was reconnecting the Signalling equipment, it's now finally ready for traffic again.