Yesterday, Mike Tough did the Boat of Garten to Aviemore weekly Line Inspection and I was tasked with cleaning/oiling the slidechairs on all the switches at Aviemore. 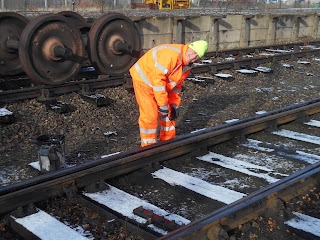 Above is Bill Johnson, whom I pressganged into assisting me, after he had the pleasure of winning the Volunteer of the Year award in November 2017 - for all his dedication and hard work over the years as the Strathspey Railway Association Membership Secretary. He chose to take a return footplate ride as his prize, which he thoroughly enjoyed - I am not so sure the same could be said about oiling points, his high viz was a tad less pristine by the time we finished. 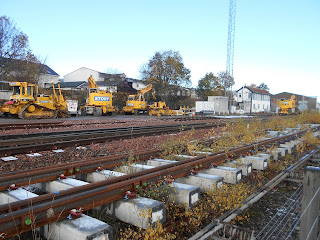 Above one of the switches lifted over our fence, in the last PWay Blog and the Big Yellow Machines all poised for action, yesterday.
﻿ 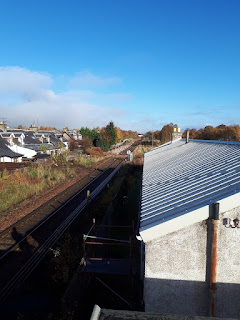 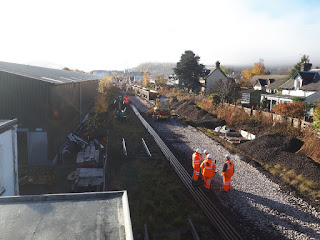 And looking South from the same lofty position during the first of a series of 31 hour "Engineers Possessions" closing HML Inverness - Perth, with the Caledonian Sleeper and freight services diverted via Aberdeen and the rest Rail Replacement Bus.
"Old" track cut up into short lengths and discarded, old ballast removed into rail wagons on an old siding in distance, with fresh ballast levelled out 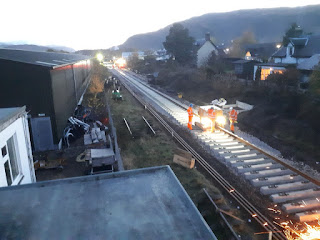 and as the sun goes down progress - new concrete sleepers perfectly aligned, presumably by machine, the wee yellow machine above is a McCulloch Rail Mover - allows the rail to be lifted in without using large machines or 360s. cutting the rail possibly to join up with existing one?
I am indebted to Davie Dow for todays photos, the captions I made up!
﻿
Posted by Neil at 22:24 No comments: 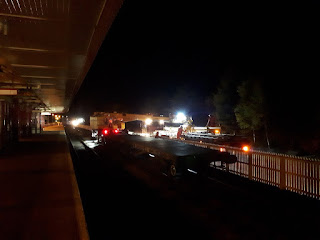 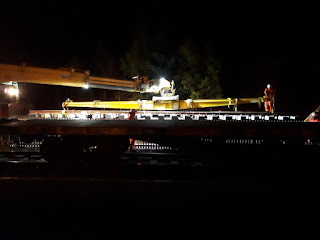 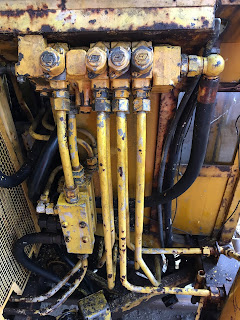 A small squad made our way out to Kinchurdy Cutting, to attempt to rectify the minor track alignment defect as identified by Engine Crew a few weeks ago. 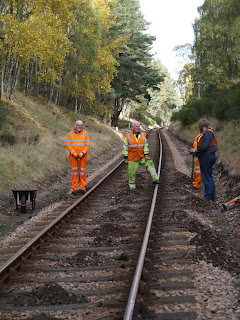 Measuring was done, using sighting boards and cross levelling, datums set, design cants taken into account and transitions (all above my pay grade!) ie dark art of Measured Shovel Packing (MSP) was again put to good use, of course Sleeper beds needed digging as above, about a 60 foot length on the high rail and just joints on the low.
﻿ 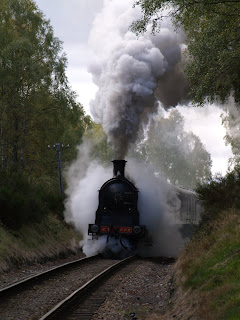 First rather steamy train of the day eventually arrived, some 15 minutes late, it was declared a "failure" on arrival at Broomhill - Georgie was summoned to get the Token back to Aviemore by car and we were advised to watch out for the 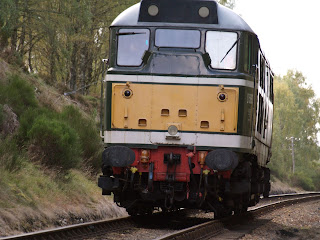 assisting Locomotive which duly rattled past. 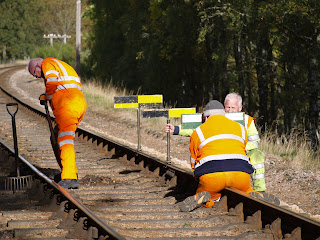 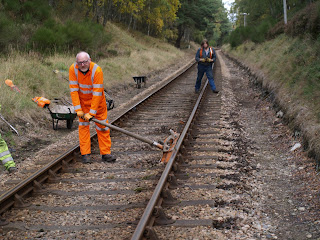 ﻿
suggested "a bit of slewing boys", by putting the jack in at an angle and digging out the sleeper ends (above track is being slewed to the right, to Georgie's satisfaction.) 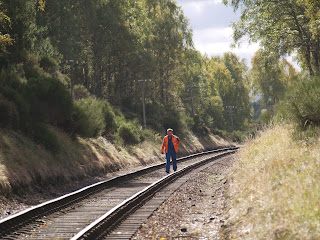 Above a jaunty Les Grant who was doing the Track Inspection, came quickly upon us and ignored all the lumps and bumps that we temporarily create until flattened out by rail traffic. We continued dealing with dipped joints up to Kinchurdy Bridge to physically finish us off! 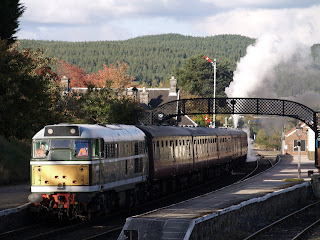 Above left cab, Les gets a lift back to Aviemore (to spot anything he missed on the 5 mile walk there!) The train ran in "Top and Tail" mode for the remainder of the day, here 828 giving the class 31 a defiant shove on departure from Boat of Garten. 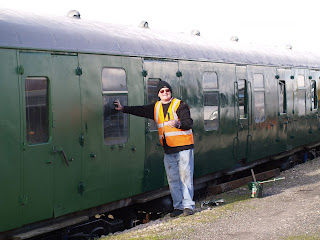 On putting away the tools we came across "Vandyke" McClintock who is now top coating the Brake Guard Van in its official livery- "Murray Duncan Green" as printed on the paint tin!
Thanks to all that assisted the PWay Dept in its wide ranging tasks in perfect weather today.