Yesterday Georgie, Stuart and Mike were at the Boat of Garten Water Tank. 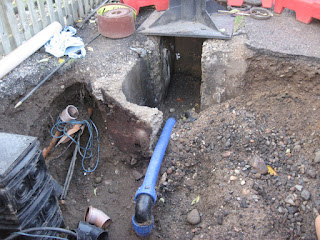 ﻿
Above is the new pipe at the base of the water crane awaiting the replacement base section which is being made at present, I believe by a local Blacksmith, however it is the intension not to use the crane during Winter services this year or in the future, as it is susceptible to being damaged by frost. 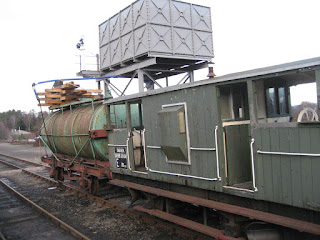 A temporary watering facility was rigged up, which will be replaced with a proper gantry supported pipe for next years Winter services...... all this effort is to improve on the previous years method of watering at Aviemore - pumped from a rail tank, with plain mains water. This year our steam locomotive 46512 will get lovely treated water, lets hope she appreciates it!
Information and photos courtesy of Mike Tough.
﻿
Posted by Neil at 13:52 No comments:

Andrew MacCracken continued with Winterisation of points at Boat of Garten until completion (proper PWay work), then he assisted the rest building external box around the water feed pipes, 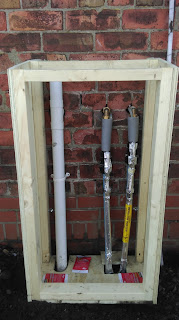 above, the silver tape is the trace heating and then insulated with rocwool, below. 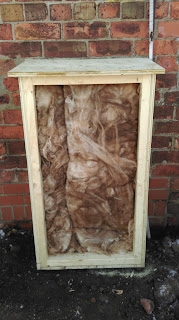 Then moved inside building to dwang out the ceiling and insulate with 50mm kingspan and 150mm of rocwool on top. 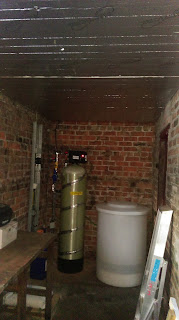 Not the warmest of days but apparently Stuart did supply biscuits - knowing him they may have been getting close to their "Best before" date!
Thanks to John Wood for photos and information.
﻿
Posted by Neil at 14:09 No comments:

Small squad today no thanks to another Strathspey Railway meeting, with the Winter Santa  Services (fully booked) starting a week today the opportunity was taken to do some "Winterisation" of the of the slidechairs of the points. 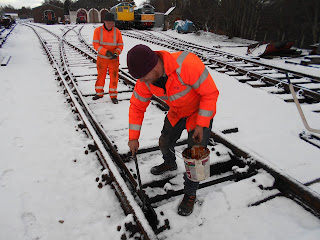 Above Mike having scraped each chair clean, Stuart applies
"Kilfrost Rail Plus" which is a specially formulated anti-icing fluid that prevents ice from forming, works to minus 35 degrees Celsius apparently, not that we want it to get that low! Today was cold enough. 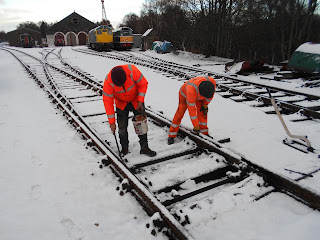 All the points at Aviemore were completed thanks to Fergus and Stuart, "assisted" by me and Mike mid-afternoon (there were some muttering that we upset their routine!)
﻿
Posted by Neil at 18:29 No comments:

Well once again the Strathspey Railway Association Members' Annual General Meeting clashed with our own Pway Weekend. The Diesel Multiple Unit (DMU) again freely supplied by the Blue Square Diesel Group, conveyed 64 Members and Guests from Aviemore to the Bridge over the Dulnain, 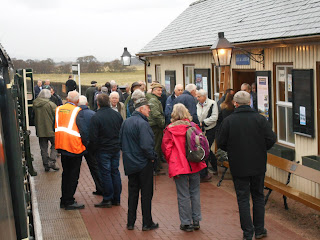 Stopping off at Broomhill and contrary to appearances there is not a mad dash for the exit or the Ladies! but for the free tea/coffee provided by Helen and Nick Thomson, Broomhill Station Masters. 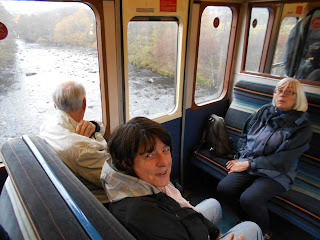 Here Maureen Cuthbertson, closest and Diane Beveridge were admiring the view before a pesky photographer interrupted! 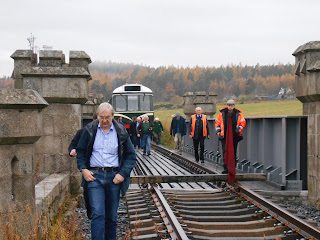 The DMU pulled back from the Bridge so that Members could alight to inspect it and all too quickly it was all aboard for the trip back to Aviemore, 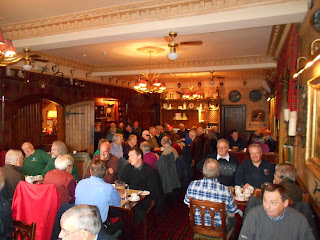 where approximately 60 of us had hearty Soup, Sanwiches and Tea/Coffee in the Cairngorm Hotel prior to the actual AGM in the function room next door.
On the Sunday a few of us gathered at Boat of Garten to thread new pipework under the Track as the pipe from the Water Tower to the Crane on the opposite platform had burst. 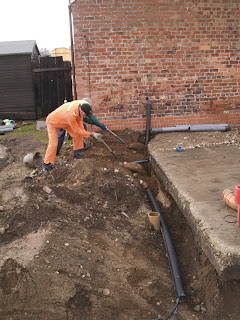 Here Jim Hardy and Andrew McCracken simultaneously shovel earth in to backfill until realised its an electric cable and needed the requisite yellow warning polythene on top of it! Not too much digging required though. Unfortunately it rained and my camera doesn't like it but good progress was made and we are waiting for the Blacksmith to reconnect the crane.
Posted by Neil at 14:26 No comments: