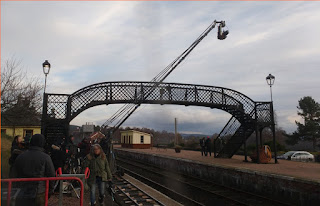 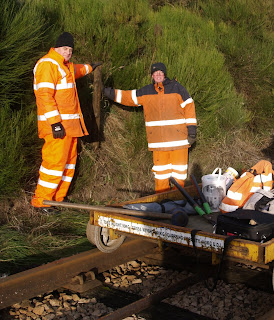 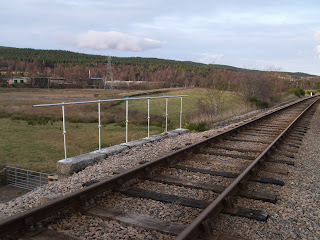 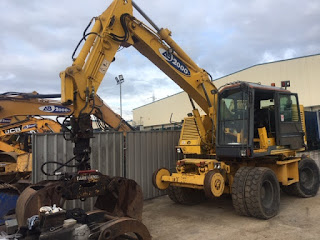 ﻿
Mike reports the following good news-
The purchase of the above Colmar 4300. Road Rail Vehicle is confirmed from Ab2000 Glasgow.
A heavy duty rotating grab is also purchased, it will also be able to have our larger vegetation flail finally fitted which will allow more extensive lineside clearance, due to the much longer reach than the current JCB RRV.
It is getting rail wheel brakes fitted at Allan Hargreaves Plant Engineers Ltd in Lancs and should be with us in February next year. This machine will greatly assist the planned future track changes at Boat of Garten North site (Morleys)  and at the proposed new Aviemore Running Shed.
﻿
﻿
Posted by Neil at 20:44 No comments:

The task was clearing of tree limbs underneath pole route wires and clearance of the visibility splays at the Estate Crossing... We started off from a chilly Boat with the class 08 locomotive, 3 well wagons and a brake van, with a very reluctant fire and headed 2/3 of the way to Aviemore. Three of our lot (Mike, Jim and Roger) were dropped off near the summit with Bow Saws and tasked with clearing the Broom around the stay wires for the Pole Route 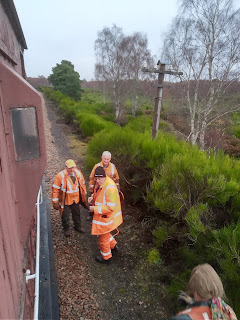 above shows them being tasked, Peter and Ian then carried on in the train down to the Estate Crossing where the brake was wound on in the Van, the 08 and first well wagon detached and set off for Aviemore, where they were needed by our S&T colleagues. Peter and Ian set too with bowsaw and electric chainsaw clearing back as far as possible. 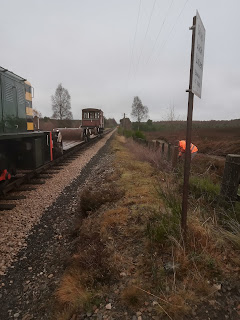 About 11 we heard a locomotive coming back to out train, to find Georgie had swapped the 08 for the NBL shunter - her favoured locomotive now it is in finer fettle, although it still needs a few finishing touches - one thing is for sure - you can hear it without the warning horns. This took us to an early lunch, by which time the rest of the team were down with us at the Crossing and lunch was had in the Brake Van - which was full of smoke thanks to the just discovered hole in the chimney.... 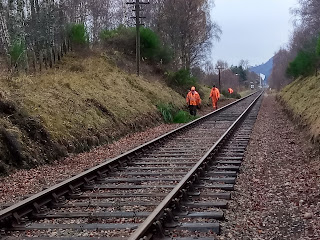 Today was a shortened day as some had to get back to Inverness for other plans so a shortened afternoon saw us working towards Dalfaber Crossing, undertaking similar work to clear stay wires for the pole route (the rest can be handled by the flail on the Road Rail JCB) and clearing saplings and tree limbs affecting the pole route wires. Work done we then propelled back to Boat of Garten and into the Yard by the NBL (below), which we could certainly hear... Georgie told Ian that she thought the same engine was used in U Boats - we pity the poor submariners! 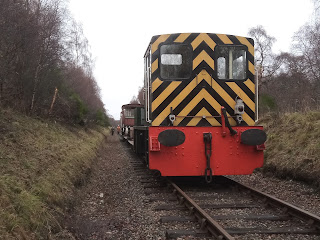 Thanks to Mike, Peter, Jim, Roger and his Son in law and Ian (for also supplying all info/photos)
﻿
Posted by Neil at 20:37 No comments:

As a result of the Office of Rail and Road inspection end of August this year, Mike and myself recently set out to measure and mark the sighting distances for our User Worked Crossings.
(below Mike starts out measuring from Broomhill UWC) 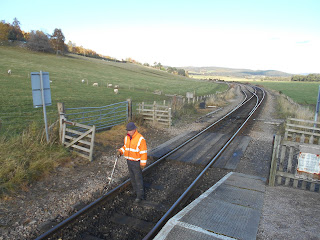 Using the Guidance Note provided by The Heritage Railway Association (HGR-A0458 if you are bored!) We sourced Reg Stanley's old measuring wheel, recently calibrated to the high standard of SR-3/180 ie 3 "sixty foot" rails measuring exactly 180 feet! and then painted white the sleeper end at the requisite distance from the level crossing. Posts are still to be hammered into the ground either side of track at a later date, so that vegetation can be kept in check between the sightlines.
----------------
Yesterday's PWay day was deferred due to it clashing yet again with the Strathspey Railway Association's AGM - fortunately a few of us were able to come along today. 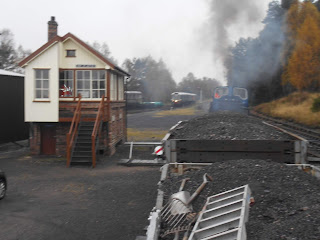 The exceedingly ambitious/impossible plan was to empty the last 3 months worth of waste ash from our steam locomotives, which had previously been mechanically loaded into 4 wagons and conveyed to Boat of Garten. We had to await the empty DMU from the aforesaid AGM trip arriving before we could get signalled on to the Aviemore section. The above photo may give the impression of speed but alas no, it was a dark drizzly day! Our locomotive didn't appear to be particularly healthy and this proved to be the case - parallels were drawn with of the classic Ealing comedy film "TheTitfield Thunderbolt" when the radiator started to overheat, I will say no more!  Consequently Steve the Driver and myself were despatched by Georgie to couple off from the train and swap the locomotive over with a more reliable one at Aviemore. 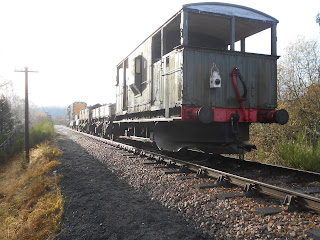 On our arrival back at the train a considerable amount of ash had been shovelled off onto the Cess (black area above) at this location the embankment is slowly sinking due to the marshy conditions below. 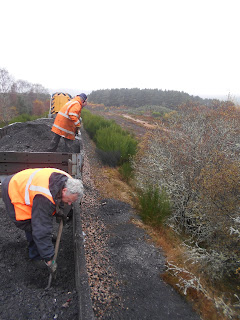 Pretty much the entire day was spent shovelling the ash from the wagons down onto the cess, under the watchful eye of Georgie who would, roughly spread it and control movement of the train, 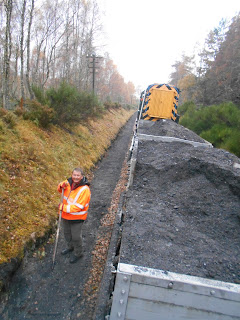 after an extremely exhausting time, Graeme (above) who only started volunteering with us today, was eventually given the less arduous task of tidying up, as can be seen he made a good job of it and more importantly he was still smiling by the end! but I suspect he may find some muscles he didn't know he had tomorrow, Fergus was a relentless machine that put rest of  us to shame, as we were all completely knackered.
Many thanks to Steve, Georgie, Mike, Andrew, Fergus and Graham - only what remains in the two wagons above to go!
----------------------------------------- 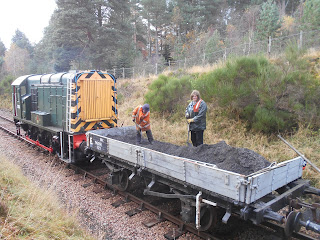 Today Mike, Georgie, myself, with Steve driving managed to empty the remaining ash 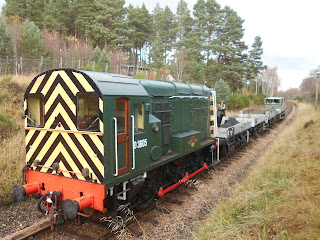 and level and tidy afterwards.