Yesterday possibly due to the Easter Holidays, only myself, Mike and Georgie despite the baking heat managed to change the last 23 sleepers, meaning nearly all of the 133 have only to be squared, gauged, drilled, screwed up, repacked and boxed in with ballast. An extended break for lunch was had, as we thought we could see smoke after the below train past, on investigation by driving along the forest track nothing was found on this occasion - better safe than sorry. 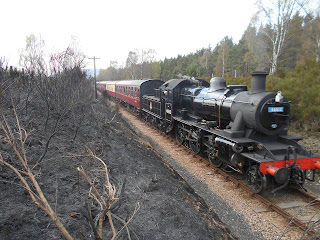 Despite the Permanent Way Departments best efforts - a decent ash, weed free cess and Scottish Woodlands flailing this cutting as far as their Road Rail Vehicle could reach up the cutting, a potentially serious fire has recently occurred, fortunately contained by a Strathspey Railway Fire Break that Georgie scraped out using the old Road Rail Atlas, many years ago.﻿ 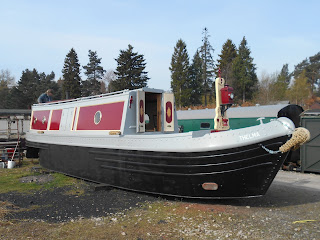 Boat Yard will miss this boat, as Georgie plans to launch "Thelma" on Monday, initially into the Caledonian Canal.
Thelma was last "spotted" breasting Slochd Summit (A9 Trunk Road) at a good rate of knots on Monday.
Today - Wednesday - Mike, Martin, Myself and John Sinclair (our new Strathspey Railway Plant Fitter) set off for the Summit, 4 miles by car from Boat of Garten, our generator started eventually but died, John and Mike went and got the spare, pictured below 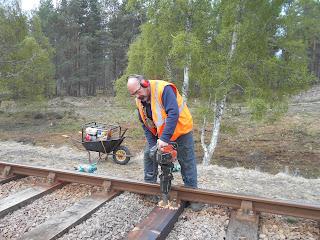 John here using the 2 stroke "Bance" to screw down. 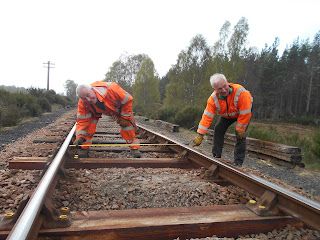 Roger (left) joined us after being to a Dentist appointment (hence the neck tie, so he said!), no one noticed that we had not taken the Track Gauge but fortunately Mike (right) had a tape measure to check gauge before drilling. 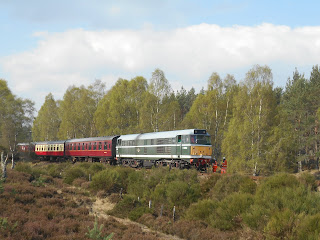 Unfortunately but sensibly due to the high fire risk the class 31 Diesel Locomotive was utilised today. Almost like Network Rail, Martin looks like he is wearing a white hard hat but we are not that daft! it's a sun hat. We managed to drill and screw almost 50 sleepers before the trusty hand me-down British Rail Sleeper Drill also died, we are not sure where we are to get such a heavy duty drill to replace it nowadays. Re-ballasting and boxing in still to do.
Thanks to all concerned, looks like John will be kept busy, repairing the plant that we break, if today is anything to go by.﻿
﻿
Posted by Neil at 10:22 No comments: