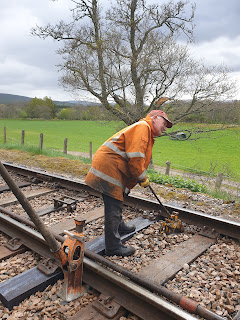 and we immediately gave Mike above, his favourite tool (not!) - the very heavy hydraulic slewing jack, which in theory easily slews the track horizontally - once the sleeper ends have been cleared of ballast, the track jacked up vertically on the back rail and the requisite perfectly angled ballast hole dug (Roddy became an expert) for the slewing jack to be dropped into, all under Georgie's precise eye and direction. Once slewed, sleeper ends at back filled in with ballast, track jack dropped and finally, slewing jack eased off - hoping that that the track doesn't go back to it's former alignment!
This process was repeated maybe a dozen times on the 200 yards of curved track that we have improved of recent. 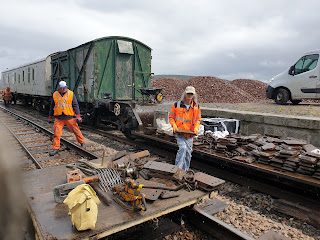 This was finally complete by lunch and the next task was to remove the remaining redundant plates and spikes etc from the site using the rail trolley, as there were no trains running, to convey them to the "flatrol". We were glad Bruce could join us for some weight lifting exercise! on his Spring holiday. 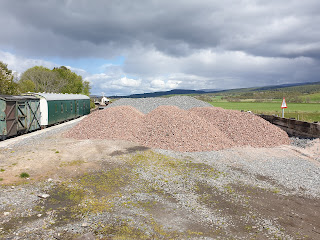 The virtual quarry at Broomhill has recently expanded by some 230 tons kindly donated by Network Rail, that was surplus to their requirements near Dalnaspidal on the Highland Main Line, contrasts significantly in colour to the Broomhill Quarry stone (although we spotted the larger lumps of rock are harder for us to work by hand - hoping Georgie drops it wisely!!!)

Thanks to Mike, Roddy, Bruce and Georgie (who fortusiously had to go deal with another Royal Scotsman) we latterly did some weedkilling, picket fence repairs and utilised some of Bruce's arboreal skills around the station - making a much lighter finish to the day.

Saturday saw a larger squad meet at the same locus - Mike reports - sufficient for two squads - Georgie, Bob and Iain C headed South to "tidy and pack" the ballast hopefully to finally finish off the renovated section to Georgie's satisfaction! 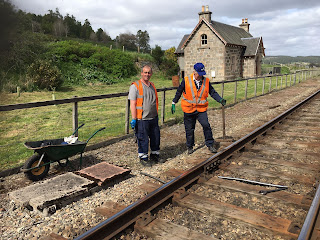 Above Michael (with a bit of a belly after all his big breakfasts on the 12 day GB XIV Steam Railtour), David and Mike who took the photo, of the commencement of fishplate oiling, mainline and loop were eventually done, hindered by tight nuts, rusted on plates and stationary trains! Ian S joined them after cutting the grass at Boat and the Station House, where a new tenant is imminent.
Thanks to all that attended.