Alasdair Jackson kindly sent the following two photos of fishplate oiling for week ending 17th July, I was on holiday at the time and did not appreciate 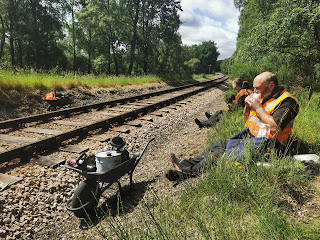 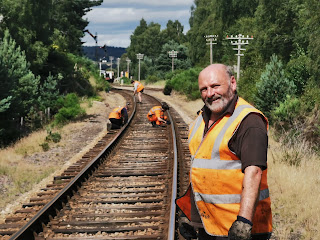 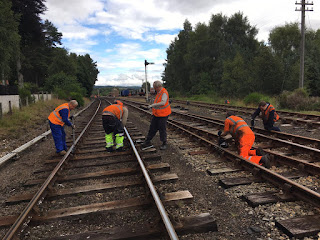 Above left to right, new recruit Bob, Michael (could do with braces!), David, Sam & Bart and Mike reports that it seemed that the crossover at the South Signal Box had not been done in decades as they were very difficult to loosen.
Fortunately there were plenty of breaks for passing traffic. Sharp eyed PWay buffs will notice the lack of foot crossing? (other things maybe of interest too!) 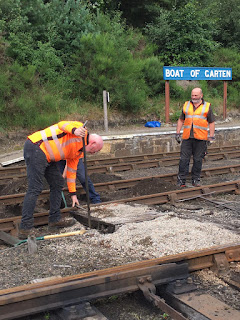 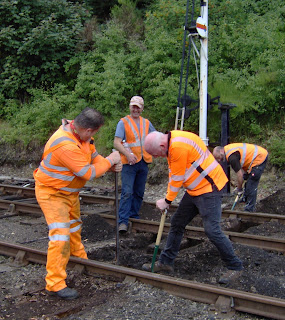 only to discover a number of track sleepers that were rotten, which were awkward and time consuming to change!  Above left to right Ian, Fergus, John and Iain. 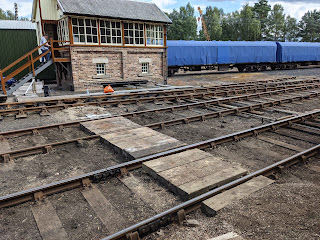 Using John's vast array of power tools, the rest was relatively plain sailing although Fergus at one point had difficulty finding a real hammer!  To be completed next Saturday.....by the same "Special" Squad.
Thanks to all that attended, I think Andrew and David managed to escape being photographed and photos/clip from John, Mike and Ian Lamb who is submitting an article for inclusion in Hornby magazine.