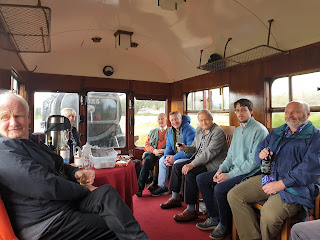 The next time P'way met up was one of our at one time annual "Line Inspections" from the comfort of the London Midland Scottish Inspection Saloon with some light refreshments to hand! Above photo was about the only decent one (and no the track isn't bumpy!) showing a few of the current and past P'Way Gang in attendance - of note is Roger being the best dressed as ever, but being in his 82nd or is it 83rd year? he has decided to take things a bit easier and has retired to the platform at Aviemore - we thanked him for his contribution and wish him well for the future.

Light luncheon was paid for by our "P'Way Boss" Georgie, many thanks to her and the Catering Dept, John the Chef & Diarmid especially, The Watkinson Trust and The Strathspey Railway Company. (We provided Mike with an alibi for the wayward golf ball that broke one of the windows further back the train)

But in typical S&T fashion Rob claimed they are "the two hardest ones"! 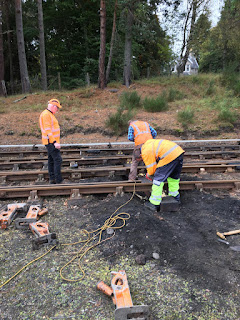 Leaving the long, heavy 20 foot timber and 6 others to the Weekend squad of Georgie, David, Michael, Fergus and Mike. 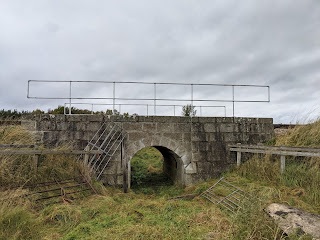 Assisted by John and Ian, after they had finished putting the final underbridge railings on the Croftnahaven Cattle creep, hopefully concluding that special project at The Office of Rail & Road's behest.

Thanks to all that participated in the work (and play) and for the contributions to this blog, photos came from me,Rob,Mike & John.