With the loss of Mike's phone he also lost his photos, so I took the one below recently and now include the anecdote that Mike kindly previously supplied - 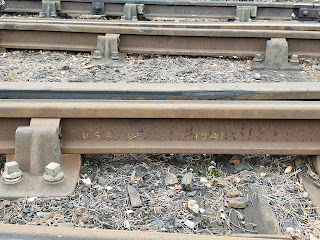 Above "as highlighted in yellow by Georgie that the crossover rails added in 1943/44 are rolled in USA as 95 lb per yard bullhead rails at a place called STEELTON in 1941 before USA entered the war in she says 45 foot lengths as Liberty ships could not take 60 foot rails & using rollers supplied from UK as USA only did flat bottom rail." 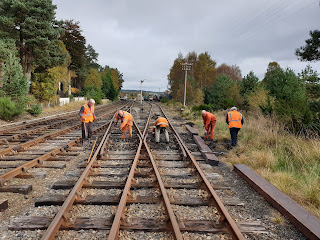 An ad hoc midweek day was arranged at short notice and a surprising number were able and willing - including a new volunteer Peter (left) think he enjoyed the experience of timber renewal at Boat of Garten in perfect working weather. 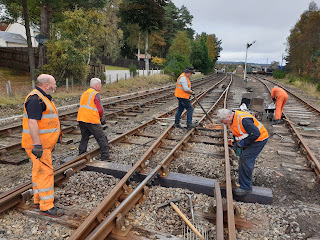 Georgie holds the correct gauge with a rail jack as Andrew drills, so that it can be permanently fixed in place.
Alas only the one train today to give us an excuse for a break! - One of the many of recent welcome visits of the Royal Scotsman heading for Dundee on this occasion.

Many thanks to Georgie, Mike, Andrew, Roddy, Iain and Peter. 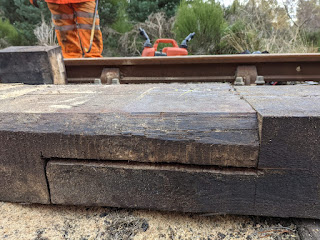 Above shows a scarf joint, expertly cut by John using his chainsaw before installation, 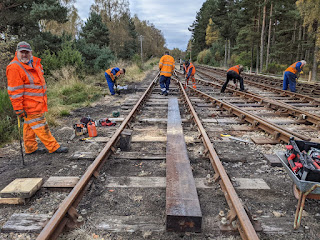 considerable amount of digging required for this now 24 foot timber, I suspect coordinated teamwork required in getting it in situ 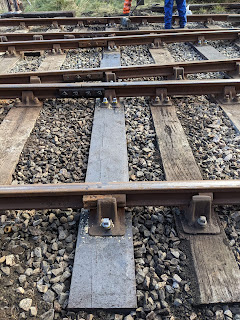 as close as possible to five rail joints 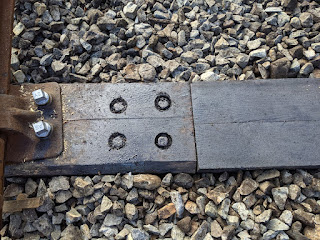 and finally the scarfed joint from above. 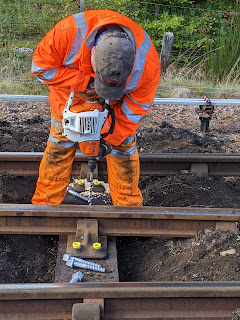 A new Stihl petrol chair screw/sleeper drill trialed by Ian above, seems to have speeded things up as the last of the remaining six timbers were changed, leaving time for a bit of lineside clearance to finish off the current work at Boat.

But the unsung Hero of the day was Track Inspector Les, who reported a double broken fishplate (which Georgie promptly attended to)

Les was promised double time and a day in lieu as a Volunteer!