As I haven't pulled my weight of recent due to my shift work pattern, I fancied a nice easy day at the Railway whilst Georgie was away, to my pleasant surprise not only did we have a new recruit but seven other regulars responded to the call to arms email - meeting at Broomhill.

Bob, Roddy and me were given the easier task of changing every third baseplate with "Pan 11", no idea why named as such, so Googled, amazed to find and be distracted by photos from our own blog from 2016! So none the wiser..... 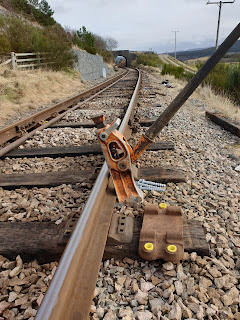 Simply put, out with old 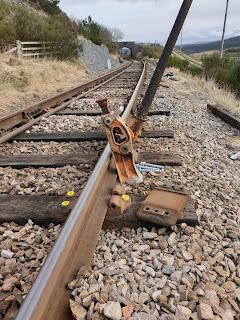 in with new, repeat.... many times

We always give the new starts the nice easy jobs - 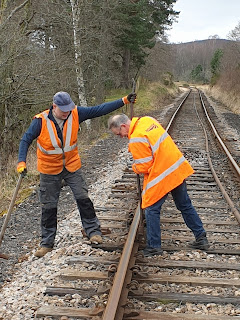 Kevin having coerced Les into coming along, shows him the joys of elastic spike removal
although please be aware Les, Kevin's "Sharapova" grunts are optional!
Some need some gentle persuasion, to break their rusted in grip, no baseplates harmed, on this occasion.

The rest of the squad were changing sleepers and lightly packing them.

After Lunch Kevin and Les gladly joined myself and Fergus heading North of Broomhill to Mid Curr No 2 Level Crossing, to put in cattle guards, which Georgie had dropped off sometime ago, to deter four legged encroachments along the line. 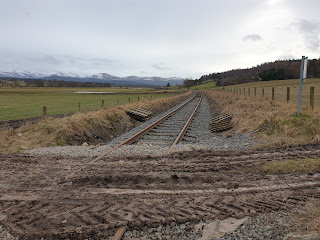 at the same time, the crossing was made safer for rail traffic 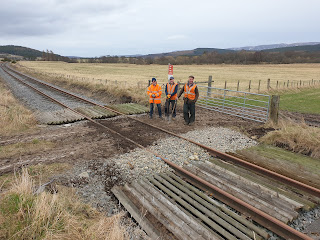 by digging out the flangeway. 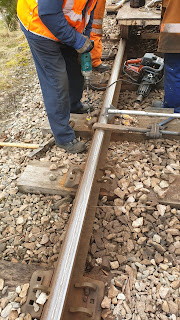 Meanwhile the rest of the squad had fun measuring and measuring again after tie bars used to tighten the guage and then drilling and screwing down quite a few sleepers.

In all, hopefully a successful day and many thanks to Mike, Roddy, Angus, Andrew, Fergus, Bob and especially Les whom may return before Kevin.