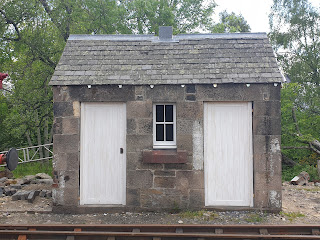 As this project draws to a close another massive one commences close by - considerable ground works on the new Steam Running Shed. 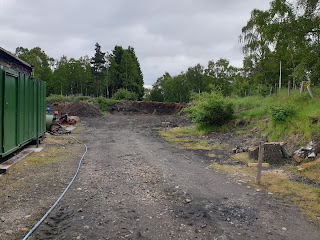 Mike surveyed and pegged it out for Georgie to start digging 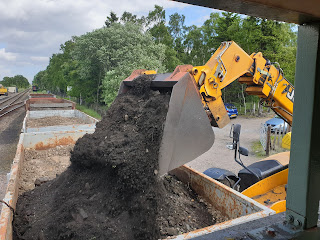 and removing using one of likely many spoil trains. 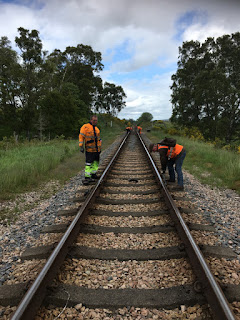 Saturday saw Georgie, David, Les, Ian (Aviemore) Fergus above and one of these days Mike might catch Michael working on camera! reached Lynchurn 1 level crossing on apparently penultimate day of fishplate oiling towards Boat of Garten.

Today's task was beset by problems from the rather wet start. 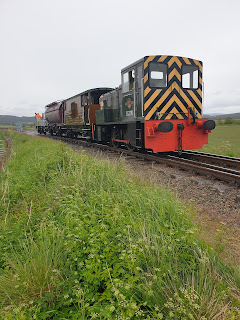 Look closely enough and Michael is actually working the weedkilling boom on the return run from the River Dulnain. The North British Locomotive had to get topped up with oil on arrival at Aviemore and then the diesel generator for the weedkilling pump packed in. Many thanks to Mike, Michael, John, Georgie and special mention to Jim Summers, Irvine Roy & Trainee for fortuitously working the signal boxes, although alas the Aviemore - Boat of Garten section is still to be done another day....
Meanwhile Andrew McCracken bravely single handedly managed to pre-drill and stack an amazing 41 new sleepers, although he reckons might have been more if he had a sharper drill bit!