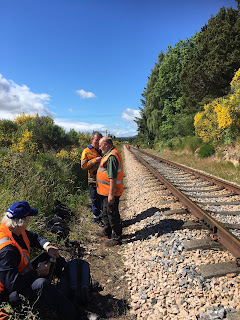 thanks due to the regulars which included David, Michael, Iain (above foreground) Fergus, Ian and Mike who took the photo. Every joint was oiled on the "long welded" 180 foot length section and Georgie wanted every second normal 60 foot one done from Milton 1 level crossing into Boat of Garten Station (even though we did them last year!) 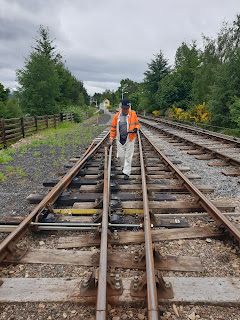 We are not so advanced with the hand spray weed killing as our long standing contractor has been very busy elsewhere, Mike has done much at Aviemore, Boat of Garten and Broomhill public Station areas and above even used some leftover weedkiller to do a small bit of our own P'Way Depot  but there is a huge amount of yards etc still to do. 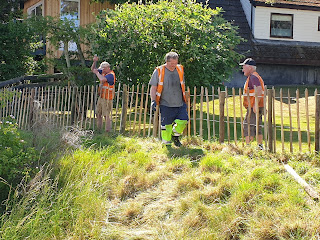 The following Saturday (not a normal P'way day) saw Fergus the Fencer and trainee Assistant Fencer Michael, helped by Mike in the afternoon erect a similar three wire chestnut pale fence at the request of one of our good neighbours (they kindly paid half the cost), the deal was brokered by Boat of Garten Stationmaster Walters who inspected the works as the last down train arrived (they kindly rotated 180 degrees so I could get the photo but I missed the fence!!!)